Home » Soccer » Mikel Arteta: Arsenal will not entertain any bids for Pierre-Emerick Aubameyang

Arsenal manager Mikel Arteta insists the club would not sell captain Pierre-Emerick Aubameyang if he were to become a target for Manchester City.

The Gunners travel to face the reigning Premier League champions on Saturday, with Pep Guardiola keen to add a striker to his ranks before the transfer window closes next week.

A summer-long saga to sign Tottenham and England forward Harry Kane ended in disappointment when he committed to Spurs on Wednesday.

City have now been linked with a move for Cristiano Ronaldo, while Aubameyang could yet become a target.

The 32-year-old starred on his first start of the season as he scored a hat-trick in the 6-0 romp at West Brom in the second round of the Carabao Cup.

Despite a poor season last year, Aubameyang’s record in England is impressive but Arteta wants to keep hold of the man who signed a new three-year deal last September.

Asked if he had any concerns City could make a move for Aubameyang, he replied: “I don’t know. Pierre-Emerick Aubameyang is our player and he will remain here.”

Arsenal have spent more on new players than any other Premier League side so far this summer and Arteta admits he is unsure whether the club would be in a position to turn down an offer deemed good enough for any of their current squad. 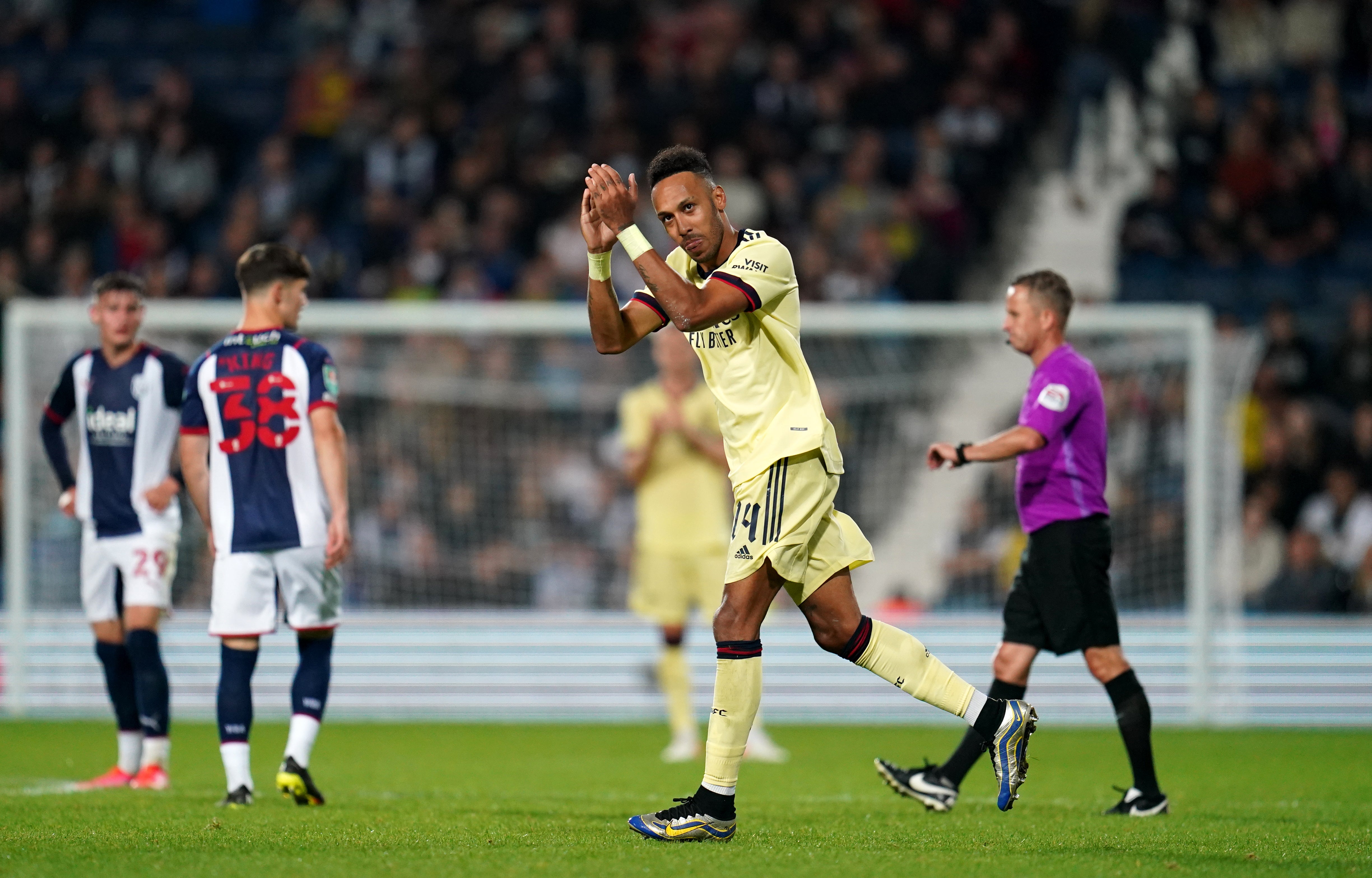 “I don’t know,” he said when asked if the club would have to consider offers for any player.

“I don’t know. We haven’t had a situation but probably that question is more for (technical director) Edu and the board.”

Arteta again returns to the Etihad Stadium this weekend where he spent a successful spell working as assistant to Guardiola, who has seemingly announced he will depart City at the end of his current contract.

That runs until the end of the 2022/23 season and Arteta believes his close friend will leave a lasting legacy in England.

“Obviously the longevity of Sir Alex (Ferguson) and Arsene (Wenger) is incredible what they’ve done,” he said.

“I think that Pep has brought a lot of new things and a different way of playing and I think what he’s added to this country is exceptional and he’s going to go down in the history of the Premier League for sure.

“Obviously it is the club that he has been the longest and I think he’s loving it there.

“I think he’s got the right support, he is winning trophies, is building what he wants, he wanted to have experience in the league and he has it and I think he’s extremely happy right now.”

While Arteta is insistent over where Aubameyang’s future lies, one player who does look set to leave north London is Willian.

Signed on a free transfer from rivals Chelsea last year, the Brazil international has struggled to make an impact at the Emirates Stadium.

Pierre-Emerick Aubameyang is our player and he will remain here

He has been heavily linked with a return to his homeland with Corinthians and Arteta admitted talks have taken place.

“We are having some conversations with him and the agent and we are evaluating the position that we are in at the moment,” he added.

Wilian is not expected to feature at City, while Ben White, Gabriel Magalhaes and Thomas Partey are not likely to be involved.

Bukayo Saka also faces a fitness test having taken a knock to his knee towards the end of the West Brom win.