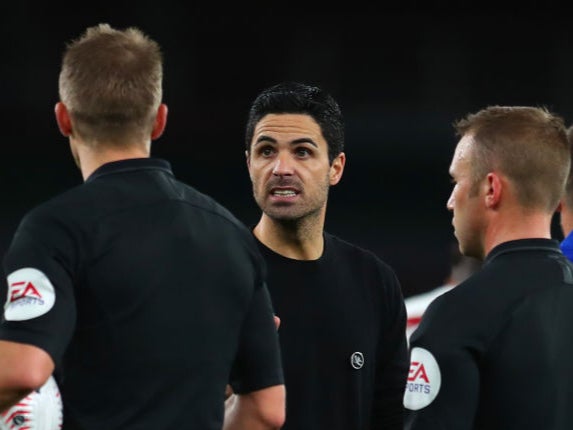 Arsenal had looked capable of scoring repeatedly in the first half, when Leicester failed to register a single shot.

“I was really pleased with the first half, the way we pressed and the aggression we showed. We were effective with that and restricted them to nothing,” Arteta said.

But he also seemed bemused by striker Lacazette’s lack of finish: “The strikers need goals, and he looked sharp and aggressive in his play. He had the opportunity to score the goal, but he didn’t.”

Despite having only just recovered from a calf injury and coming on for only half an hour, Vardy looked razor-sharp in comparison and caused the Arsenal defence plenty of problems.

“He’s a world-class striker, an incredible talent,” his manager Brendan Rogers said after the match, acknowledging that his game plan had rested largely on Vardy’s shoulders.

“The plan was always to make sure we’re in the game, then put him (Vardy) on for half an hour.”

Arteta said that kind of ruthlessness in front of goal is exactly what his side will need to work on, referring to one late move where defender Hector Bellerin raced in to smash a volley goalward – but straight at Leicester keeper Kaspar Schmeichel.

“Credit to them, they are really organised and it’s difficult to create chances. We created a really good one with Hector and we didn’t convert. It’s an aspect we have to improve on.”