Home » Soccer » Millwall 4-1 Sheffield Wednesday: Lions come from behind to romp past Owls

Report and highlights from the Sky Bet Championship clash between Millwall and Sheffield Wednesday at The Den as goals from Kenneth Zohore, Scott Malone, Ben Thompson and Tom Bradshaw sealed victory for the Lions.

Scott Malone skipped past three players before sliding the ball past Keiren Westwood and then an attempted cross from Ben Thompson a minute later evaded his team-mates and the Wednesday goalkeeper to turn the game on its head with 20 minutes to play.

Wednesday’s Callum Paterson notched his seventh goal of the season early on to give the visitors the lead, despite a promising start from Millwall.

However, they drew level six minutes before the break through a Kenneth Zohore penalty. Malone, Thompson and a late deflected goal from Tom Bradshaw completed the turnaround to deservedly give Millwall the points. 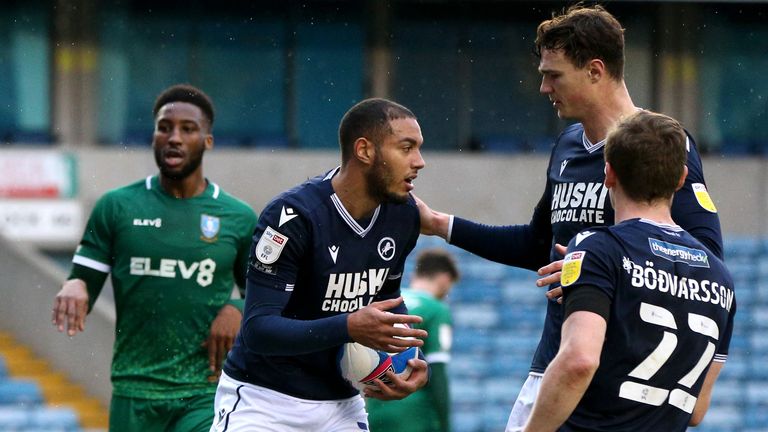 Scotland forward Paterson had two stabs from six yards out, with his second turning in Elias Kachunga’s cut back after the Congo international drove well down the Millwall right.

With the home side reeling from the early setback, Joey Pelupessy fired one just wide of Bartosz Bialkowski’s goal after Paterson robbed Shaun Hutchinson in the penalty area.

Ryan Leonard was guilty of squandering a brilliant opportunity for Millwall to level when he failed to execute a simple square ball to Zohore, who had a clear sight on the Owls goal.

It did not take long for ex-Sheffield United man Leonard to atone, however, tugged down by Pelupessy in the box five minutes from the break, winning a spot-kick.

Zohore stepped up to smash it into the top left-hand corner to bring Millwall level.

It was a totally different story once the sides emerged for the second half. Millwall were clearly intent on breaking a winless home record that stretched back to a 2-0 success over Luton in October.

Debutant George Evans lashed over in the opening moments after the Wednesday defence failed to deal with a corner before the recalled Jon Dadi Bodvarsson drew a superb save from Westwood with a swerving effort.

From the resulting corner, Westwood was again called into action, somehow clawing away a header off the line from Millwall captain Hutchinson.

Thompson was then thwarted before Malone’s moment of magic, just when it seemed a 15th draw of the campaign for Millwall was on the cards.

His close control helped him evade the attentions of three Wednesday defenders before proceeding to neatly slip the ball into the net and give his side the lead they merited.

Substitute Thompson added a third to seal the win, with his cross-shot totally wrong-footing the otherwise outstanding Westwood.

And to rub salt in the wounds, Bradshaw capped off a very satisfactory afternoon for Millwall when he got the final touch off a goal-bound strike from Mahlon Romeo.