Wales’ World Cup qualifying nightmare suffered another setback on Tuesday night when striker Kieffer Moore was ruled out of their next three matches.

Moore is required to isolate for 10 days, meaning he misses Wednesday’s friendly in Finland as well as the qualifiers against Belarus — in Kazan, Russia — and Estonia in Cardiff.

The forward, 29, was found to have been a close contact of reserve keeper Adam Davies, who has tested positive for Covid-19.

Wales were already without Aaron Ramsey and Joe Rodon due to injury, and Ethan Ampadu, Tyler Roberts and Brandon Cooper also miss the Belarus match because their Russian visa applications were not processed in time.

Boss Rob Page was already frustrated that UEFA moved the clash with Belarus — which could not be played there due to sanctions against its government — to Kazan. ‘I am still confused as to why we were asked to play in Russia,’ said Page. 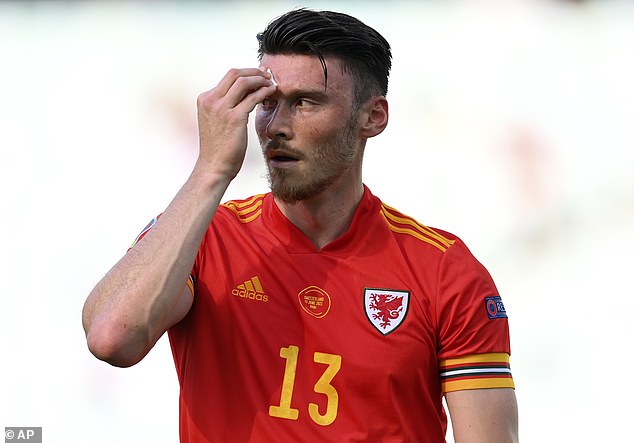 Wales striker Kieffer Moore will sit out of his country’s opening World Cup qualifiers against Belarus, Russia and Estonia while he isolates