Jose Mourinho sensationally ran onto the pitch during Roma’s game with AC Milan to stop Tammy Abraham from getting himself sent off during the ill-tempered clash.

Minutes after Abraham scored and halved Roma’s deficit to make it 2-1 before the break, the former Chelsea striker and his team-mates got themselves into a heated argument with the AC Milan players.

With Abraham already on a booking and the arguments getting heated, Mourinho took matters into his own hands by sprinting onto the pitch to pull his striker away from the incident to save him from getting a second yellow. 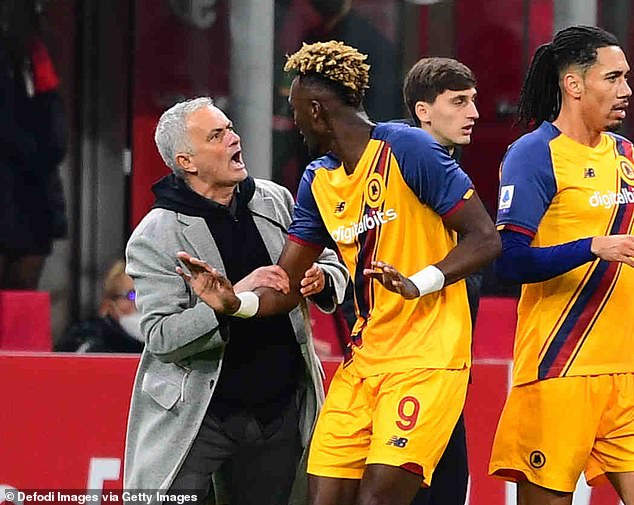 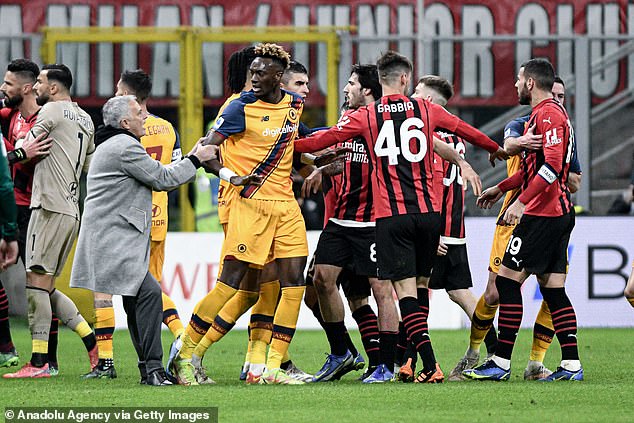 Mourinho can then be seen telling the Englishman to keep his cool before pushing him away from the group.

While the Special One was on hand to prevent Abraham from getting a red card, he wasn’t so lucky with two of his other players.

Rick Karsdorp​ and Gianluca Mancini both received their marching orders in the final 16 minutes while Rafael Leao added to Olivier Giroud and Junior Messias’ strikes to see the game finish 3-1 to Milan and Roma down to nine men. 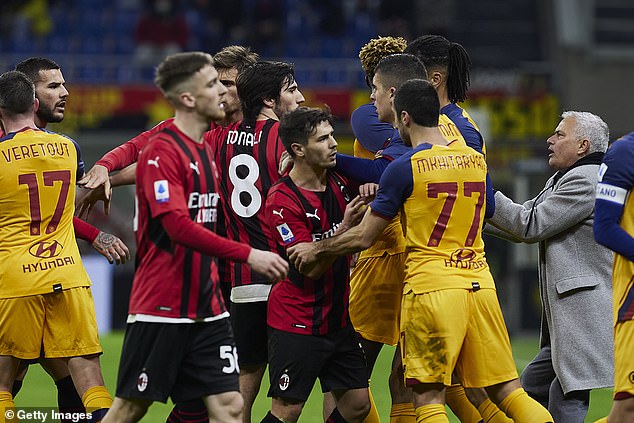 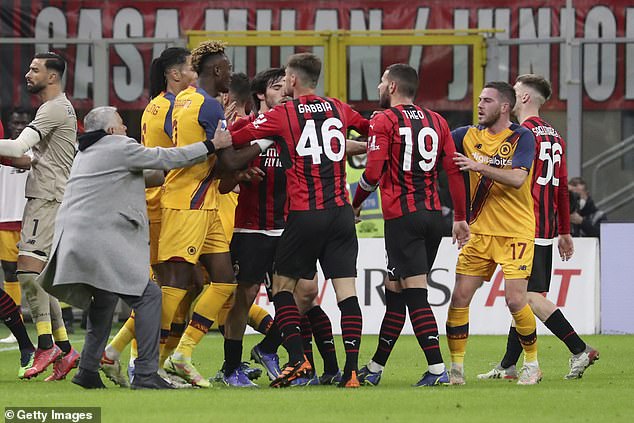 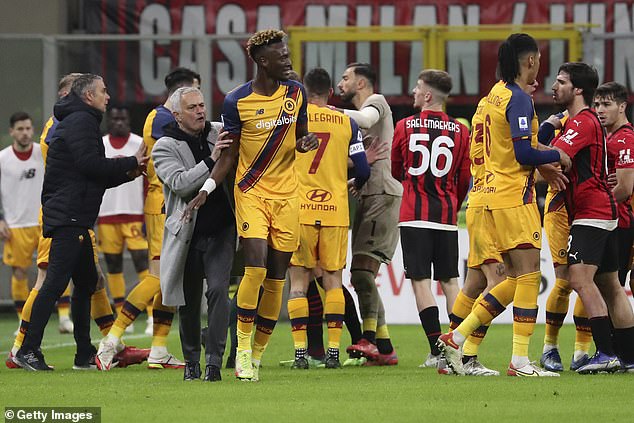 Abraham, who was already on a yellow card, run the risk of being sent off before the break

It was an action-packed 90 minutes for Mourinho, who also reportedly had to intervene to stop racist chants from Roma fans allegedly calling Zlatan Ibrahimovic a ‘gypsy’.

According to broadcaster DAZN via SempreMilan, the incident occurred just as the 40-year-old was coming off the bench, and just a few minutes before he would set up Leao for Milan’s decisive third goal of the night.

The report states that Roma boss Mourinho – who managed Ibrahimovic at Inter Milan between 2008 and 2009 – heard the racist remarks coming from away fans.

The former Chelsea, Manchester United and Tottenham boss is then consequently said to have called the travelling fans to stop the abuse, which they reportedly immediately did. 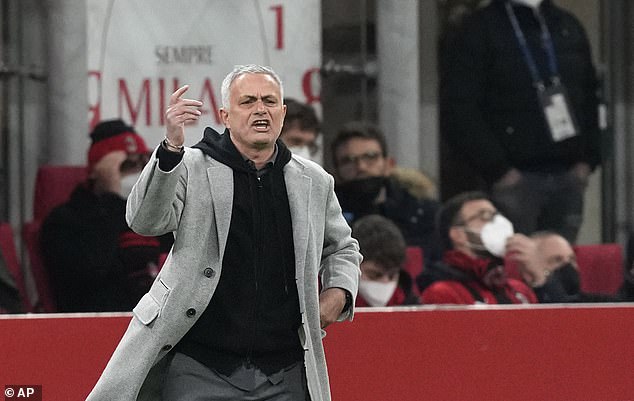 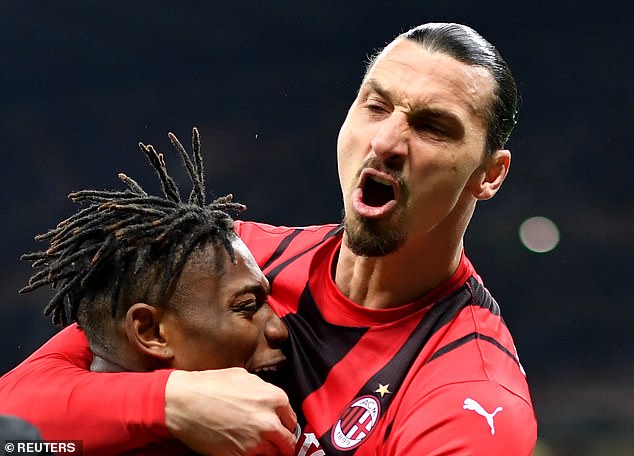 However, MilanNews via SempreMilan report the racist songs and insults were restarted and continued even when Ibrahimovic – who does not have Romani origins – and his team-mates were going through their warm down.

It is not the first time Roma’s supporters have hurled abuse in the direction of the Sweden international, who replaced ex-Arsenal and Chelsea forward Giroud in the 77th minute.

The former Man United and PSG star was booked in October’s reverse fixture after urging the Roma fans to sing their taunts of: ‘Sei uno zingaro’ (you are a gypsy) louder following his goal in Milan’s 2-1 in the Italian capital. 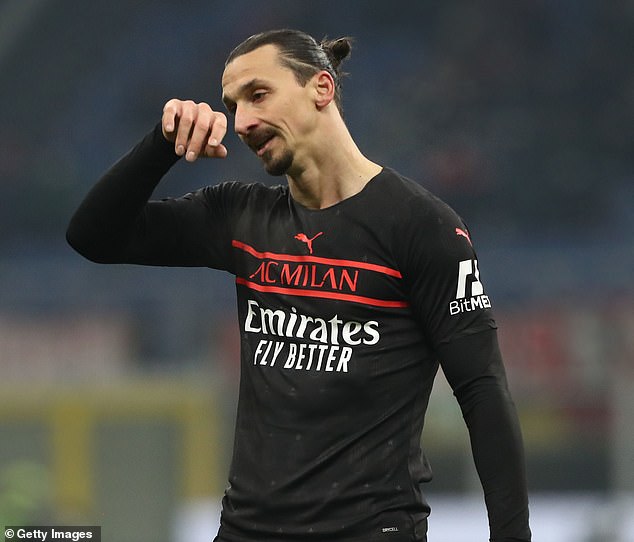 ‘We have zero tolerance for any form of racism,’ Roma said in a statement after that game.

‘The club has been committed to combating racism and any form of discrimination for years.

‘As an organization, we continue to do everything we can to change the behaviour of some fans in a positive way.’