New Western Sydney Wanderers recruit James Troisi has unloaded at his former club Adelaide United, saying they have been painting him as the "bad guy" through "completely false" statements about the manner of his departure.

Speaking for the first time since signing a two-year deal with the Wanderers, Troisi rejected any suggestion of untoward conduct after the Reds reluctantly granted him a release earlier this week to take up the offer to play under coach Carl Robinson, who first tried to sign him back in 2015. 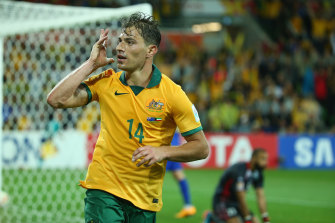 James Troisi celebrates after scoring for the Socceroos against Kuwait at the 2015 Asian Cup.Credit:Getty

Adelaide was left fuming over not only the timing of Troisi's exit – coming less than two weeks out from the start of the new A-League season – but because they said he was a required player, and knew it.

Football director Bruce Djite said on Tuesday that the 32-year-old and several other players had been told they were free to speak to other clubs in September, purely because of budgetary restraints caused by the post-COVID crunch. 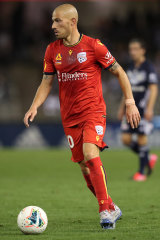 James Troisi during his stint with Adelaide last season.Credit:Getty

But United's financial position changed a month later after the sale of several players overseas, and Djite said both he and coach Carl Veart had told Troisi on "several occasions" that that permission had been retracted.

Djite also said he had warned the Wanderers off making any further approaches for Troisi, a two-time A-League championship winner with Melbourne Victory whose contract with the Reds ran through to the end of this season.

Troisi's account of events is a total contradiction, with the former Socceroo declaring he had never once been told by Adelaide that he could no longer leave, either verbally or in writing.

"Nonsense. Didn't happen at all," Troisi told the Herald. "I'm not an idiot. I've been around a long time. I wouldn't be speaking to other clubs if I knew the club wanted to keep me.

"If your boss, in any business, comes to you and says you can leave … I don't understand now, because I've left, I'm the bad guy? It does not make sense. They said that to me and ultimately, if a club is saying that to you, there's no future for you."

Until that point, Troisi said he never had any intention of leaving Adelaide, his hometown club, having not lived in the city since he left as a 15-year-old to join the academy of English Premier League side Newcastle United.

It's not about the money. I wouldn't be playing in the A-League if I wanted the money, because to be honest, there's nothing here.

The lure of joining the Reds in the first instance, he said, was because of his desire to be around family after the birth of his first son last year – while he also has close personal ties with Djite, a former Socceroos teammate.

"That's probably why it hurts a little bit," Troisi said.

"Don't be childish, don't make it what you're making it into now. The door was shown, I left, 'thank you for your service' and we go on our merry way.

"It's a big shame. I'm getting a lot of stick now from Adelaide supporters but they don't know the truth. How are they meant to know? No one knows anything, really, of what happens behind closed doors."

The Wanderers have tried and failed to sign Troisi numerous times in the past – as did his new coach Robinson, who also attempted to bring the attacking midfielder to Major League Soccer club Vancouver Whitecaps five years ago.

Troisi said he and Robinson had forged a close bond over the years, which in tandem with the club's longstanding interest was a "massive factor" in his decision to move to Sydney's west.

"I took a massive sacrifice coming to Adelaide which is completely fine – completely my decision – and I'm actually taking less money than I was at Adelaide at Western Sydney. You need to be shown your worth, and Western Sydney have shown me that they've obviously wanted me for quite some time.