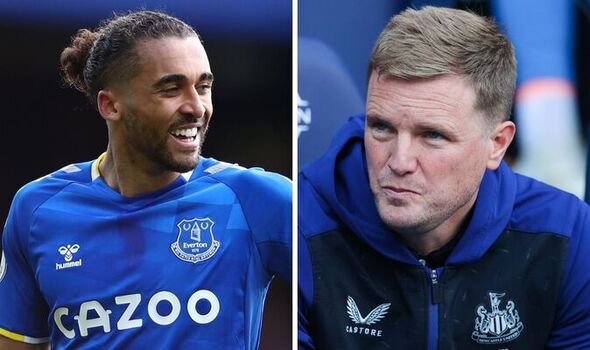 Newcastle have reportedly shelved plans to look for alternative strikers this summer with Dominic Calvert-Lewin ‘moved to the top of that list’. The Magpies flexed their new financial muscle at the first opportunity in January with moves for Kieran Trippier, Bruno Guimaraes and Chris Wood.

With Premier League safety now secure, plans are now being put in place to make more moves in the summer window. Signing a striker to rival Callum Wilson and Wood is seen as a top priority with Reims striker Hugo Ekitike expected to join.

But Newcastle also want to bring in a marquee forward capable of taking the club to the next level. The original shortlist consisted of Ivan Toney, Eddie Nketiah and Darwin Nunez.

Nketiah would be available on a free, but both Toney and Nunez would command big fees in the summer. However, the Telegraph now claim that Calvert-Lewin is the top target for Newcastle heading into the summer.

The report claims that Newcastle have been ‘encouraged to believe’ that Calvert-Lewin would be interested in making the switch. Everton are supposedly yet to indicate whether they will allow the forward to leave this summer.

The 25-year-old has endured a difficult campaign ravaged by injury, but he’s been fit since January and still struggled to break into Frank Lampard’s starting line-up. Newcastle are hoping to raise funds ahead of the summer window by listing seven players on the market.

Eddie Howe has already made it clear that he expects a number of changes at St James’ Park this summer.

“We’ve sat down and discussed the squad and I think we have a very good vision of where we want to take the team,” he said. “Now the hard part comes where you have to reshape the squad, both ins and outs, and try to come back with a better squad.

“There’s an element of truth in that. With Financial Fair Play, we have restraints and we have things that we have to work within, so we can’t just go out and spend money on players like maybe teams could have done in the past and totally change their squad within one transfer window. That is not an option for us. The more money you spend in one window, the more it impacts your ability to then spend in windows beyond.

“The rules are there to govern the game properly and we have to follow suit, so that does impact what we can do this summer. We want to try to bring the right players in, ones that are proud to wear the shirt and that can make a difference.”