The encounter was in its infancy, but Neymar was already tattooing himself on it. Three minutes in, there was the ball to Kylian Mbappe, allowing the speedster to hit the acceleration and fire wide across the face of goal from an unkind angle.

The clock hadn’t ticked into double figures when the Brazil international’s shot on the swivel was smothered by Manuel Neuer.

Neymar was simply warming up. Loosening his toes, slowing teeing Bayern up for the torment that was to follow either side of the half-hour mark.

A classy Paris Saint-Germain counter-attack was decorated by a curled pass from Angel Di Maria down the left channel to Mbappe.

The Frenchman’s visionary square ball was directed to an unmarked Neymar on the opposite side of the area.

The playmaker was again thwarted by the Bayern Munich goalkeeper, who darted off his line to block the shot.

So far, so the Neymar show.

Surely, a deserved goal was around the corner, accompanied by joyous trickery and a flamboyance often overtaken by function at this crucial juncture of the Champions League?

Nope. Bayern were still breathing in tie courtesy of intervention from their desperately recruited defenders: the crossbar and post.

Their actual markers were temporarily stupefied by Neymar’s dance.

He dazed Lucas Hernandez on the edge of the area with a medley of stepovers, shifted the ball inside onto his left foot, rocketing a beauty off the post.

Two minutes later, Di Maria’s free-kick was headed away to Neymar, 25 yards out. Kingsley Coman had ambitions of attending to him, but PSG’s No.10 manipulated the ball behind his standing leg to beat him and shaped inside on his right foot. There was agony as his stellar curling shot then hit the top of the bar.

Neymar’s personal collection of great pieces of play that didn’t result in a goal was to swell further. His delightful pass to Mbappe was sent back his way, and a low shot evaded Neuer but was denied by the post. 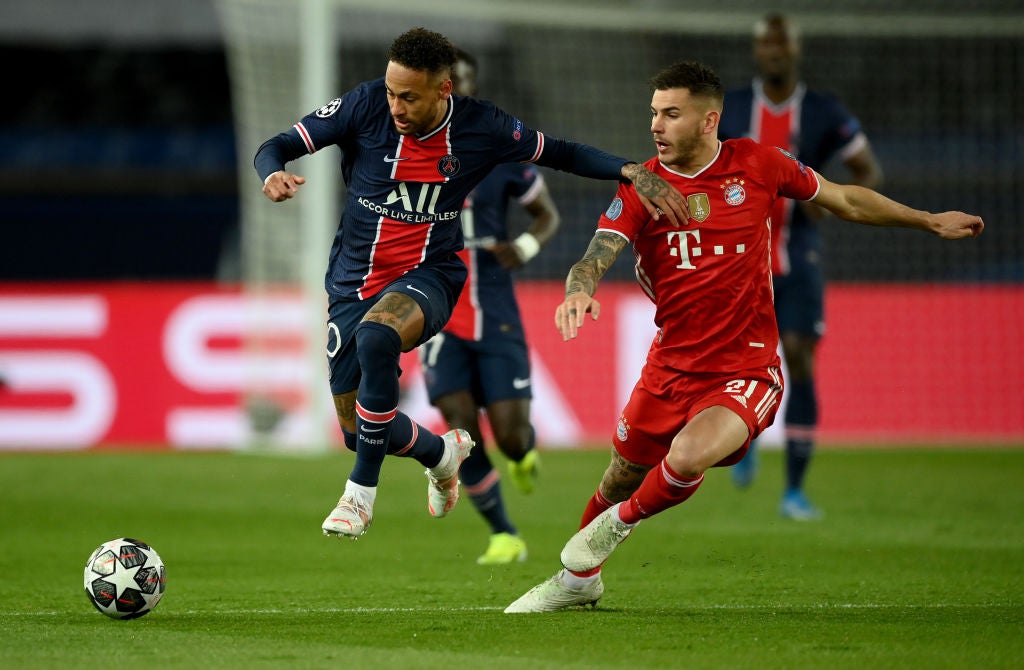 That was five minutes of pure football heaven, just minus the end result which felt like it was owed to such masterful football.

As a snapshot of the crazy, fun, frenzied state of this tie, Bayern – who looked done – were suddenly in front.

It was untidy, yet riveting. Eric Maxim Choupo-Moting towered over Presnel Kimpembe to head in after Keylor Navas had originally spurned Alphonso Davies.

Only 40 minutes of the second leg had been played at that point, yet there was enough entertainment to paint this entire competition even if the 1-0 scoreline didn’t suggest as much.

Neymar didn’t get his final-third reward, but he has a Champions League semi-final to continue his conjuring.

He pulled the strings in the opening clash and set the aggressive, brave tone in Paris – all while widening our eyes.

The real goal would be to lead PSG to the final with more luminary play and finally get them – and his destiny – over the line.

Related posts:
Basketball News:
England's route to the Euro 2020 final and the opponents they may play
Arsenal fans have fallen in love with new kit but vow not to buy it
Newcastle vs Manchester City live stream: How to watch Premier League fixture online and on TV tonight
MLB News:
What is wrong with the Minnesota Twins?
Radical call on female footy fallout divides Australia
Could Justin Fields end up as the best QB from the 2021 NFL Draft? How disrespect fuels dominance
Recent Posts