Home » Soccer » No coaches, no training – no problem for determined Socceroos, says Arnold

Socceroos boss Graham Arnold has been forced to prepare for the crucial World Cup qualifier against China in Doha in the early hours of Friday morning without two of his key assistants and only one major tactical training session with his players.

Rene Meulensteen, the former Manchester United first team coach who is now Arnold’s assistant, could not travel after testing positive for COVID-19 in England. 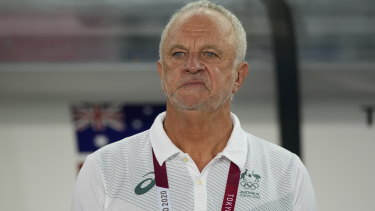 Graham Arnold pictured during a Socceroos match against Egypt at the Tokyo Olympics.Credit:AP

Tony Vidmar, the ex-Socceroos defender, did not travel because after completing his 14 days’ post-Olympics quarantine in Sydney he had, at the insistence of the SA government, to spend another fortnight in isolation when he returned to Adelaide.

And, to add to Arnold’s difficulties, training and preparation with the squad will be cut to a minimum.

The majority of players arrived on Sunday and Monday after playing for their European clubs at the weekend, but because they had not received clearance from a COVID-19 test by Monday afternoon (Qatar time) they were not allowed to have their first session until Tuesday evening local time, just 48 hours ahead of the match.

They will have their only main session, when the coach will work on tactics and shape, on Wednesday night Doha time (early hours of Thursday morning AEST), just one night before the game.

Meulensteen and Vidmar are taking part as best they can in preparations via Zoom calls, while Trevor Morgan, the Joeys coach and national technical director, has been scrambled in to assist on the ground. He knows most of the players and has indeed coached many in their youth.

Arnold says he is not “getting stressed out about it”.

“We had a fun social-distanced stretching session in the hotel,” the Socceroos coach explained in a Zoom call from Doha.

“It’s a challenge, but the most important thing is that we stay positive.

“We are still talking and communicating with each other and coming up with a game plan.

“The only difference is that I am doing everything on the ground here.”

Arnold says his team is mentally strong and battle-hardened, having played seven of its past eight games on the road.

“It doesn’t matter where we play. I want nothing more than to play in Australia, and I really expect that we can do that in October [but] the mentality that I have built with this group of players is that we go out every game, no matter where we play, expecting to win. If we have only got one training session, we have only got one training session.

“We have built this squad over the last three years. We have built depth, we have been together, and they know exactly what I expect from them, they go out on the pitch and they perform.”

Arnold confirmed that approaches had been made to try and play the match in Europe – something which would have assisted the Socceroos, given that is where the majority of the squad is based – but the Asian Football Confederation said no.

“You can’t do it because it is outside the confederation,” he said.

“For World Cup qualifiers you have to play within Asia. The most important thing for me was that we didn’t play in east Asia, it was more important to bring China away from east Asia over this way.”