Manchester United boss Ole Gunnar Solskjaer and Edinson Cavani were both spotted making the same gesture after referee Chris Kavanagh ruled out the striker’s effort in the first half against Tottenham. The game was tightly poised in the first half as both sides tried to find a way to break through the opponent’s defence.

United were enjoying more of the ball in Tottenham’s third and looked the most likely to break the deadlock.

And they thought they had found the opening goal of the game after terrific play between Cavani and Paul Pogba.

Fred found Pogba on the edge of the box who created himself some space before squeezing a through ball in between Serge Aurier’s legs and perfectly into the feet of Cavani.

The Uruguay international then calmly slotted past Hugo Lloris before wheeling away in celebration. 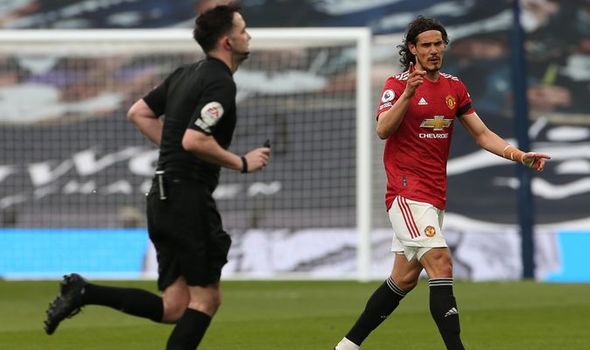 But Tottenham players were immediately pleading with Kavanagh over what they perceived to be a foul on Son Heung-min.

Replays showed that Scott McTominay had swiped at Son’s face while the two were grappling for the ball earlier in the build-up to the goal.

VAR officials soon asked the on-field referee to go over and take a look at the incident himself to determine whether the goal should stand.

And Kavanagh made the decision to rule out Cavani’s effort to the bemusement of the United bench.

Solskjaer was sat down when Kavanagh was over at the screen, seemingly confident the goal would stand

But the United boss was seen immediately jumping out of his seat, holding his arms out wide in disbelief.

And replays over the pitch showed that Cavani copied his manager’s reactions, similarly raising his arms in anger. 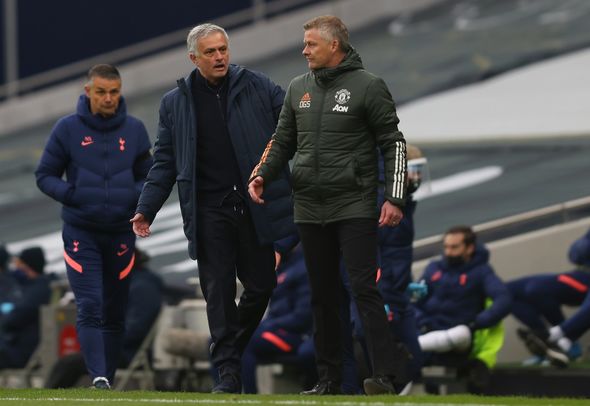 United’s disappointment would have then soon turned to frustration just minutes later as well when Tottenham scored.

Harry Kane found Lucas Moura inside the box before the Brazilian played through to Son at the back post, who calmly finished past Dean Henderson.

It proved to be the only goal of the first half as well as Tottenham went into the break holding a 1-0 lead.

But United players quickly surrounded Kavanah before making their way back to the dressing room to protest Cavani’s disallowed goal.