Three-quarters of the way through a tie between two of the grandest names in European football, amid the chaos of a crowded penalty area, Paul Pogba stood on the edge of the six-yard box and put his foot on the ball.

He stopped and everything stopped. He moved to shoot and everyone moved with him. But then Pogba feinted, buying himself an extra half-second to judge the space between his marker Franck Kessie, goalkeeper Gianluigi Donnarumma and the inside of the near post.

With his two opponents now caught on their heels, he had created the space required to turn a goalmouth scramble into something exquisite, and a goal that would ultimately send Manchester Unitedthrough to the quarter-finals of the Europa League.

It was the type of moment that United had patiently waited for over the past six weeks while their most talented player has gradually recovered from a thigh injury that was initially supposed to only sideline him for a short time.

And even this was not Pogba at full fitness. Ole Gunnar Solskjaer stressed in his post-match briefing that he had maxed out Pogba in a bid to progress, bringing him on for Marcus Rashford at the earliest possible opportunity. 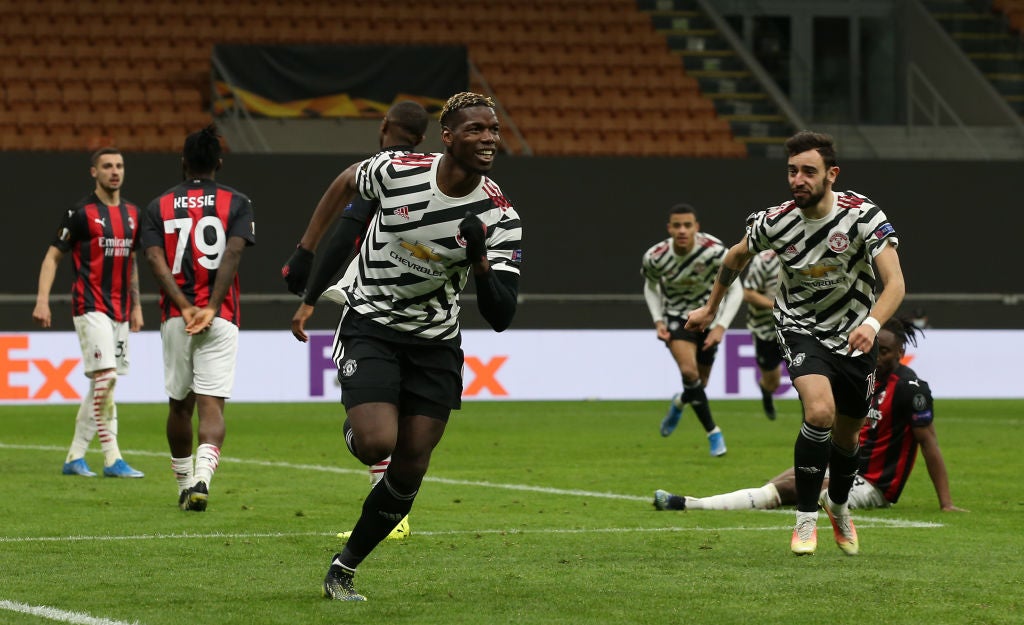 “Paul looked like he’d been out for six weeks, for sure,” the United manager said of his half time substitute. “He’s been working really hard but when you play football it’s different. He couldn’t play more than 45.”

Those quotes sound as if Solskjaer was pouring cold water on the excited reaction to Pogba’s match-winning performance. He wasn’t. If anything, he too was excited about what else there is to come.

“He’ll get better and better,” Solskjaer added. “That’s a big boost for us for the rest of the season. The boys have done fantastic without him but we know Paul’s qualities.”

And even if there were signs of physical fatigue in Pogba’s performance as the second half at San Siro wore on, that presence of mind and composure on the edge of the six-yard to stop, think and create the space demonstrated something United have been missing.

Solskjaer has enjoyed great success over the last year with Bruno Fernandes – a player who is about goals, assists, penalties, long, raking ambitious passes from a variety of positions and always attempting to be the protagonist.

That is Fernandes’ genius. Before his arrival, United were crying out for that type of player to break the Solskjaer era out of their patterns of stale possession and help to deconstruct compact defences.

Pogba’s genius is different. He can do long, ambitious passes but his short ones can be just as incisive. He can score from range but he will not regularly attempt to, knowing that there are less spectacular but more effective routes to goal.

Pogba turned 28-years-old this week but is yet to have a league season where he reaches double figures in both goals and assists. In all competitions, he has only managed that twice. The only season he managed it with United, he was the first-choice penalty taker.

But Pogba has never been about raw output. He is about reading the game a second ahead of the opposition; knowing where the space is on a pitch at any given moment; having the equanimity to stop in a busy penalty box in order to create the space to score.

Solskjaer could certainly have done with Pogba’s sang-froid in the more frustrating moments during his absence: the draw at the Hawthorns, the stalemate at Selhurst Park or during the late stages of the 3-3 with Everton, the game in which he was forced off through injury.

A strong end to the campaign for Pogba, with a run to the Europa League final, will only renew speculation about his future and the contract which is set to expire in the summer of next year.

To lose a player of Pogba’s ability on a free transfer once is unfortunate. To do so twice would be the height of carelessness. United know that there are only two ways to avoid that: convince him to sign an extension or allow him to leave in a cut-price deal this summer.

One of those options is far more preferable than the other. For if Pogba were to leave, his absence would be felt.