Manchester United legend Paul Scholes would prefer his former club signed Tottenham striker Harry Kane than Jadon Sancho. Borussia Dortmund winger Sancho is United’s top transfer target for the current window and a five-year contract has reportedly been agreed with the player. But Scholes believes signing a wide player should not be a priority for Ole Gunnar Solskjaer.

Since football resumed in June, United’s regular front three of Marcus Rashford, Anthony Martial and Mason Greenwood have been in fine goalscoring form.

The trio have scored 61 goals between them in all competitions this season ahead of the Europa League knockout stages.

Scholes says Sancho is a top player but is not a necessity signing for the Red Devils.

“I don’t think [signing a winger is] a major priority,” Scholes said on BT Sport.

JUST IN: Willian to Arsenal ‘done’ as Chelsea ace to sign two-year contract 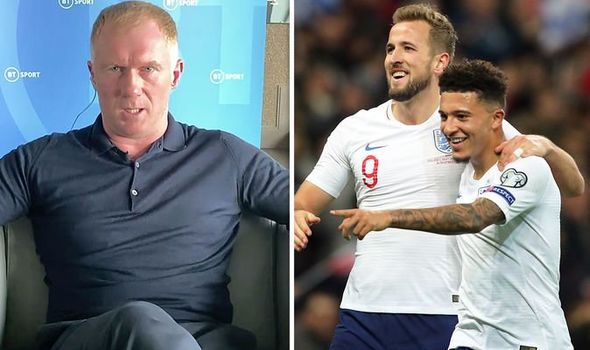 “Don’t get me wrong, Sancho is a top-quality footballer. I think he would improve any team in world football.

“I’m talking Liverpool, Man City, Barcelona, Real Madrid – he would improve all of them.

“I just think we already have three forwards, or wide men/centre-forwards that are very similar to Sancho, possibly not quite as good as him but potentially I think they could be.”

Scholes instead thinks a striker should be at the top of United’s transfer wishlist and would back the arrival of Spurs and England star Kane.

Scholes continued: “I think if that’s Harry Kane you’re talking about now, I’d be more desperate to sign him than Sancho at this stage, although don’t get me wrong, as I said I think he’s a top-quality footballer.

“I just think United need a No 9, a real centre-forward, a real goalscorer and Harry Kane would be that man for me.

“Then again you have to think what Ole would want. He doesn’t seem like he wants that type of centre-forward at the minute, he’s got [Odion] Ighalo who is more of a No 9, but he seems to be using him in the last 15-20 minutes when things aren’t going quite that well.

“So maybe Ighalo could be an option at a cheaper price just as a squad filler. But Sancho would improve any team.”