Home » Soccer » Pep Guardiola: Manchester City will have to suffer to beat Liverpool

Pep Guardiola says his Manchester City side go into Sunday’s game against Liverpool at the Etihad, live on Sky Sports, knowing they have to “suffer” to come out on top.

Guardiola’s side are currently 10th in the table after an inconsistent start to the campaign but have shown signs of improvement recently and are unbeaten in eight matches across all competitions.

“When you play against teams like Liverpool you always have moments where you have to suffer. We know it, we have to do it and try to use our strength as much a possible,” Guardiola said.

“We know each other quite well, we play many, many times and I don’t expect a game like 90 minutes we will be there or they will be there.

“In general, we did games – not over 90 minutes because we are not ready to maintain the level but in general it was good.”

City beat Liverpool 4-0 in their last meeting at the Etihad in July, but Guardiola admits circumstances around that game mean that result does not give City any psychological advantage going into Sunday.

“It’s a new competition, they were champions,” he added. “They came here to win, to break out 100-point record.

“They were champions, we had qualified for the Champions League. It was just a different game. It will be different players in both sides. I don’t pay too much attention to the past, in a good or a bad way.”

Guardiola made a topical reference when asked about the importance of the game. Whatever the outcome, the City boss believes it is too early in the season to draw conclusions from the result.

“It is an important game but, like the presidential elections in the USA, all the votes must be counted – there are a lot of points to play for,” he said.

Guardiola says that Liverpool remain the favourites to retain their Premier League title, but warned that in a season disrupted by a pandemic, teams such as Leicester, Arsenal and Tottenham can spring a surprise. “[Liverpool] are the biggest favourite but with the pandemic the situation is a bit different,” he said. “I see other teams strong.

“Leicester maintained the level from most of last season, Arsenal made a big step forward to be contenders and at Tottenham, Mourinho has the team what he wants.

“Chelsea is stable now and has a huge squad for rotating top players. [Manchester United] in this moment is not in terms of results but we saw the quality they had last season, we suffered a lot in results and up front they are incredibly fast and clinical. 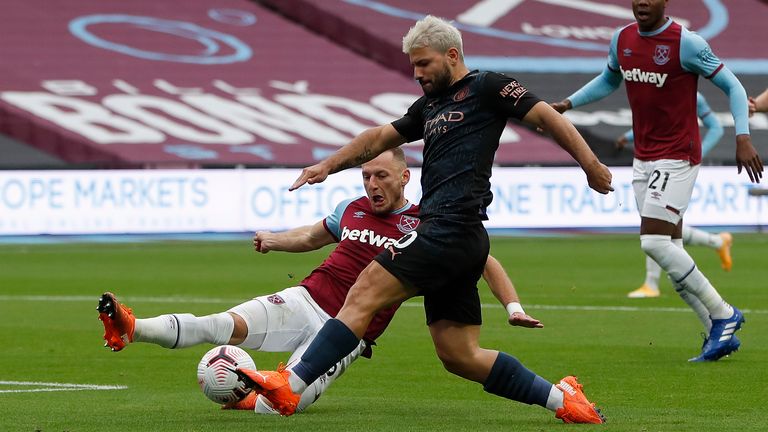 Sergio Aguero has been ruled out of Sunday’s game after failing to recover in time from injury.

Asked if he could feature this weekend, manager Guardiola said: “No, he is not ready, not yet.”

Carra: It’s still Liverpool or City for the title

Jamie Carragher on the Pitch to Post Preview podcast:

“I still can’t envisage anyone besides Liverpool or Man City winning the league. I just can’t see that. I know Tottenham have started really well and I hope they have a great season and there are more challengers, but I just can’t see anybody else lifting that league title besides the big two of the last few years.

“I’d been very strong putting Liverpool as favourites for the title, but for the injury to Virgil van Dijk – not just one of Liverpool’s top players but one of the top players in the Premier League. And if something similar would have happened to, say, Kevin De Bruyne for Man City, who is their top man, I think you’d say the same for City. I think it makes for an even more interesting race, no doubt about that.”