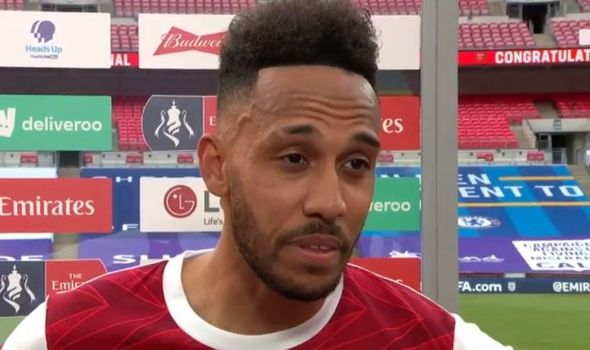 Pierre-Emerick Aubameyang decided against committing his future to Arsenal moments after his brace secured FA Cup final glory over Chelsea. The Gabon international scored from the penalty spot and with a deft clip over Kepa Arrizabalaga either side of half-time to seal the 2-1 win at Wembley.

However, rather than insisting he’s there to stay, Aubameyang opted to shift the focus on the need to celebrate with his team-mates when asked about his future.

“I’m really not thinking about this,” said Aubameyang. “I just want to enjoy with the guys and take the trophy now.”

Aubameyang has a year to run on his Arsenal contract and question marks surround his future with the transfer window now open.

The 31-year-old has previously admitted his interest in playing for Real Madrid, while Barcelona have been touted as admirers too. 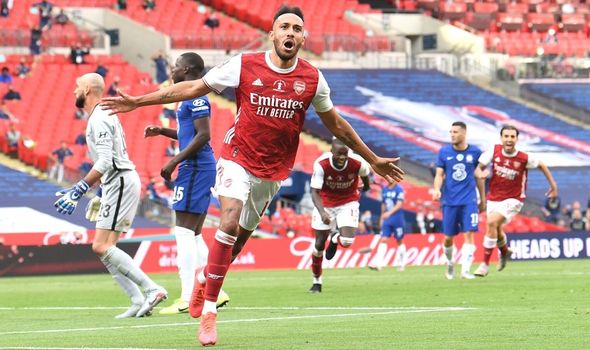 Arsenal’s domestic rivals Chelsea and Manchester United have even been tipped to launch bids for the goal machine.

The FA Cup is the first trophy Aubameyang has won since joining the Gunners in 2018 and he was eager to savour the moment.

“Great evening, I will enjoy it all night, for sure,” said Aubameyang. “I had this inspiration [for his second goal] – I know [Chelsea defender Kurt] Zouma well – he knows I’m right-footed so that time said: ‘Okay, I’ll go on my left’. And that’s it.”

“It was a poor start and everyone realised too and we did it,” Aubameyang said. “Of course, I take it [the FA Cup winners’ medal over the Premier League Golden Boot], I’m so happy for the team and for the boys.”

Arsenal boss Mikel Arteta addressed Aubameyang’s future prior to the victory, which made him the first man to win the FA Cup with the north Londoners as their captain and their manager.

“No, I don’t have that fear [that the final will be Aubameyang’s farewell to Arsenal],” Arteta said. “What I said is it’s a package at the end. You need a lot of ingredients on the table to persuade a player of his level to be at this football club.

“Don’t forget that he still has a contract here with us. We wanted to keep him and do it in a more long-term way but at the moment he’s with us and I think he should be really proud of where he is as well.”

Related posts:
Basketball News:
Fury offered sparring ahead of Joshua showdown by Raphael Akpejiori
‘His winning formula is amazing’: Ben Simmons’ fourth-quarter breakout showcases his full potential
McGowan out indefinitely
MLB News:
Washington Football Team to make Jennifer King a full-time offensive assistant
AFLW 2021: Carlton, Collingwood prepare for season opener
Marshon Lattimore motivated to continue dominance vs. Bucs WR Mike Evans
Recent Posts
This website uses cookies to improve your user experience and to provide you with advertisements that are relevant to your interests. By continuing to browse the site you are agreeing to our use of cookies.Ok