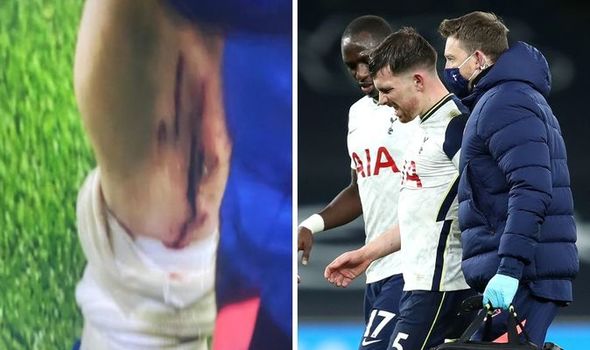 Josh Da Silva was shown a straight red card for a horror challenge on Pierre-Emile Hojbjerg in the Carabao Cup semi-final tie between Tottenham and Brentford. The Championship side were on a run of 16 games unbeaten in all competitions but found themselves a goal down inside 12 minutes when Moussa Sissoko gave the hosts the lead.

Brentford were pushing for an equaliser after the break and found the net when James Toney poked in from close range, but it was then ruled out for offside.

Heung-min Son then added a second for Tottenham 20 minutes from time to give Jose Mourinho’s side some breathing space.

The game was getting away from Brentford as they continued to push for a way back into the match.

But their chances of a late comeback were dented when Da Silva was sent off for a horror tackle on Hojbjerg.

Da Silva, who was the hero of the night against Newcastle, lunged in on a challenge with Hojbjerg and went over the ball, smashing into the Tottenham midfielder’s shin.

The former Southampton man went down in a heap and was in clear pain as he pulled down his sock and took off his shinpad.

Referee Mike Dean went over to the pitchside screen to look at the replay of the incident and decided to give Da Silva his marching orders.

Hojbjerg had to be helped back up to his feet before hobbling off to the sidelines.

He looked as though he wanted to come back onto the field but Mourinho could be seen holding him back.

Hojbjerg was eventually helped down the tunnel with medical staff to take a closer look at the gash in his shin.

“It’s definitely not deliberate by Josh Da Silva but because he catches Pierre-Emile Hojbjerg ankle – and you know in the Premier League that is a red card – that’s why he sends him off,” he said on BBC Radio 5 Live.

“When you see it in real time, I don’t think there is much in it but when you slow it down, you can see Da Silva’s right foot that catches Hojbjerg.”