Arsenal’s young stars shone brightest in their 3-1 victory over Chelsea for a much-needed Premier League victory.

Despite recent poor form, Mikel Arteta’s side came out the blocks faster than the Bluesand were rewarded for their efforts when Alexandre Lacazette converted from the penalty spot after Reece James’ foul on Kieran Tierney. Midfielder Granit Xhaka doubled Arsenal’s lead just before the break with a sumptuous free-kick into the top corner than Edouard Mendy could do nothing about.

Bukayo Saka’s second half cross-cum-shot gave Arsenal a three-goal lead and left Frank Lampard and his side looking leggy and clueless at the Emirates before the hour mark. Tammy Abraham got a consolation late on before Bernd Leno saved a penalty from Jorginho to halt a potential comeback.

Here, Sportsmail rates the performances from Arsenal and Chelsea in their Boxing Day battle. 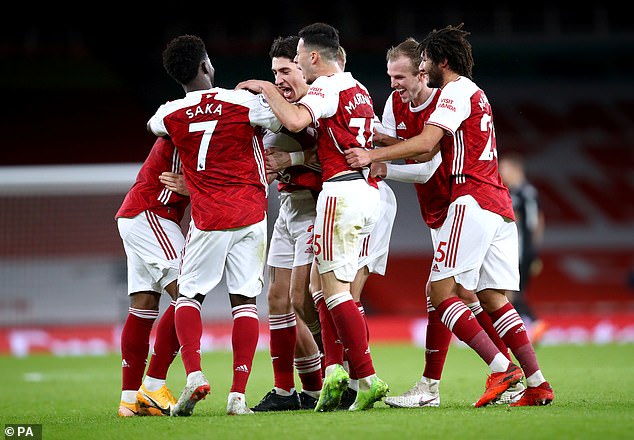 A surprisingly quiet 90 minutes for the German goalkeeper – until his brilliant penalty save.

Recalled to the starting line-up and as skipper too. Set the tone for Arsenal by attacking as much as possible from his right-back position

Ponderous passing did not boost confidence on his first league start of the season. Better in the air and shut out Abraham for most of the match.

Not one of his more accomplished performances with some heavy touches and poor distribution but a couple of exceptional blocks.

One of the few reliable Arsenal performers again played up to his level and his run won Arsenal’s penalty. A solid, characteristic hard working display from the Egyptian midfielder.

Still can’t tackle, which is not ideal for a central midfielder, but great energy on his return from a ban and a goal to savour. One of the brightest prospects at Arsenal – possibly fro England too – and another game and goal to boost his reputation.

Comfortable on the ball in his first Premier League start of the season but missed a great scoring chance.

Lively on left hand side of attack. Mishit a great chance in the opening minute but a constant menace to the Chelsea defence.

Worked hard to lead the attack and took his penalty with a quality finish. A rare night of delight when his tactics and selections paid off.

First touch of the ball was to pick the ball out of the net – after a penalty – not much he could have done to stop the next two goals either.

Struggled to cope with Martinelli’s pace at the start and conceded pen when beaten by Tierney. Better going forward.

Solid at the heart of Chelsea’s defence. No wonder the Brazilian star is admired worldwide. Made the game look so easy – apart from when beaten for pace by Saka.

Defied an injury worry to have a half decent game at left-back on a day when little ran his way.

Still a one-man human wall, but Chelsea needed more from him.

A first half performance to show he was worthy of his selection ahead of Jorginho – so a surprise when he was replaced by him at half-time!

Started well and curled a neat free-kick against a post. Faded like his team-mates only to produce a strong late finish. Dangerous when he took a chance to run at Arsenal with the ball but not at his best.

A few nice touches but not enough to stop him from getting hauled off at half-time.