A year ago, Julian Nagelsmann was devising a plan for his first knockout challenge in the Champions League proper amid a mix of excitement and apprehension.

It was an opportunity to further his management artillery and an important development point, but it had presented itself against a master on the stage: two-time winner of Europe’s elite competition, a holder of its secondary tournament and someone who had more experience on the continent than the German had collected in his entire career to date.

It would also see Nagelsmann in the dugout opposing the man his nickname was derived from: Jose Mourinho.

“He has experience in every sort of situation,” the 33-year-old explained at the time to The Independent ahead of the two-legged test with Tottenham.

“He has managed so many knockout games and knows what to do if his team goes ahead, is behind, concedes early, needs a late goal. I’ve only had knockout games in the DFB-Pokal – not in European football apart from the qualifier against Liverpool with Hoffenheim.

“It’s totally new for me and totally different from how to manage Bundesliga games.”

At the juncture of priming Leipzig to tackle Spurs, Nagelsmann’s only taster of Europe football was during the 2017-18 season at Hoffenheim, with Tuesday’s opponents Liverpool knocking them out of the qualifier for the Champions League 6-3 on aggregate.

It was a missed chance, but offered vital lessons. The drop to the Europa League while juggling domestic demands had taught Nagelsmann not to overthink rotation versus rhythm.

“I changed a lot of players between Bundesliga matches and the Europa League for fresh legs,” he said. “I learnt that we needed more stability. You need to keep five or six of the same places to give you structure, to be your spine. This is very important.

“The other difference is the mental and tactical change between the two competitions. We had too many offensive-thinking players for European games and opponents punished a lack of protection.

“In the Bundesliga, you can have maybe six or seven guys who learn more towards the offensive phases in a game, but never in Europe.”

That wisdom showed against Tottenham, who were dismantled 4-0 by Leipzig on aggregate.

Despite ceding Timo Werner in a £54m transfer to Chelsea, the Bundesliga side followed that impressive showing by outmanoeuvring Diego Simeone’s Atletico Madrid to reach their first Champions League semi-final just 11 years after their formation.

They were caught in two minds against Paris Saint-Germain at that phase – not sure whether to stick to their offensive principles or be more compact to guard against Kylian Mbappe and co – and were ruthlessly punished 3-0.

However, Nagelsmann again illustrated the ability to learn, beating the French champions at home during the group stages this season, before a Neymar penalty undid Leipzig in the reverse fixture at Parc des Princes, where they were the much better team.

They were shellshocked 5-0 by Manchester United, but then dispatched them from the tournament with a 3-2 result in Germany that saw them finish second behind PSG.

And on Tuesday, the man who became the youngest coach in Bundesliga history will be keen to prove just how much he has absorbed and grown since last pitting his wits against Liverpool during his debut European campaign.

Even though plenty has altered since – Nagelsmann left Hoffenheim for Leipzig, turning down Real Madrid and interest from the Premier League in the process, reaching a Champions League semi-final while Klopp became a champion of Europe and England before now overseeing an injury crisis and drastic dip – this fixture remains a measurement tool for the up-and-comer.

Nagelsmann is smart enough to know he is not yet the best manager in the world, let alone the foremost one out of Germany.

He spent much of the last few years intrinsically analysing Klopp’s Borussia Dortmund, before charting Liverpool’s stylistic evolution under him.

The latter especially resonated because Leipzig were also undergoing a shift.

“In the first two seasons under Jurgen, it was more about counter-attack and creating attacking moments. That’s the same process we are going through at Leipzig, expanding to not only rely on pressing and counters.

“If you want to be a good manager, you have to watch Liverpool games.” 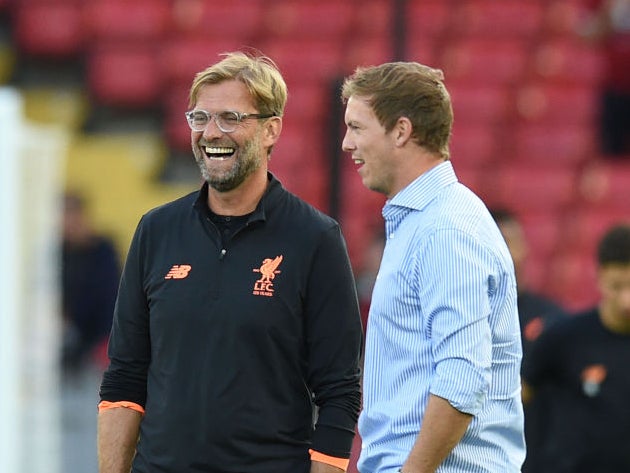 Last season, Nagelsmann would gather his Leipzig charges and show them clips of the Merseysiders during analysis meetings.

It wasn’t to emphasis their quality in games, but the sheer will to win. “It’s the performances that you can learn from, but more importantly, is what you can take away from their mentality.

“It’s totally crazy when you’re so successful, you’re 22 points ahead of the next team in the league, but you do more and more and more to win games. That is a big message to give to players, especially the young ones.

The script is altogether different in this campaign, coloured by devastating injuries that have structurally wrecked Liverpool.

Even when they have played very well, as was the case against Manchester City and Leicester, individual mistakes and rapid capitulation led to painful defeats in both games.

Nagelsmann last formulated a plan against Liverpool when they were on their ascent not a staggering descent. And yet, despite the absentees for the English champions and their form, not much will change from an approach and respect point of view.

The strategies of Pep Guardiola and Brendan Rodgers were still cautious against Liverpool but succeeded in forcing and profiting from errors by exposing psychological cracks.

“The games looked, for a majority of the game time, completely different. In our situation in the moment, the things finally go against us because we made individual mistakes. So, yes, we speak about them but that’s how it is with human beings – you make a mistake, not on purpose or whatever, it just happens and how can we avoid them?

“One time it’s communication and the other time it is just making better offers or all these kind of things. We are always together in these moments, but the performance in the other periods of the game, we have to keep going.”

Klopp’s side are fragile after conceding, a byproduct of their lack of stability from the scale and consistency of defensive changes, which has also contributed to a decline in midfield protection.

Nagelsmann’s task will be deducing how to prey on Liverpool’s loss of confidence when something – a decision, a goal – goes against them because performance-wise their quality remains.

That will be complicated by an evident shift in mood, with Klopp strong and defiant in his press conference amid recent whispers of him needing a break following the heartbreaking loss of his mother, Elisabeth, and the professional wear of the past two months with a mountain of injury setbacks.

“I don’t want to have the situation, but the situation is an interesting challenge,” Klopp said. “Nobody wrote a book about how you came into a situation like this and how did you solve it. But we will sort it. While we are doing it, it could be tricky.

“What’s cool about football is, no matter what the outcome of the previous match is, you’ve got the same chance for the next match. You have to keep that faith and sometimes you lose faith and need to get faith back.

For Nagelsmann, who Klopp referred to as a “an extraordinary talent” that has “already proven virtually everything that you can prove as a manager,” it is a chance to slice away more of that faith and step out of Klopp’s shadow.

He has done that in one respect by no longer sharing the same agent – Marc Kosicke – but there is never a more significant platform than on the pitch.