The German outfit were by far the more progressive for most of the match and created a string of half-chances, but Yannick Carrasco had the best chance of the first half with a near-post shot.

It was a Spanish attacker who scored the first goal of the game – but it was Dani Olmo, for Leipzig, with a fine header after a Marcel Sabitzer cross. But then Joao Felix, off the bench for Atleti, danced through the defence to win, and convert, a penalty.

Just when it seemed extra time was beckoning, the Champions League produced a second late winner in the quarter-finals, this time with Tyler Adams drilling in a shot which deflected off Stefan Savic and in to send Leipzig through.

Here are the player ratings from Lisbon. 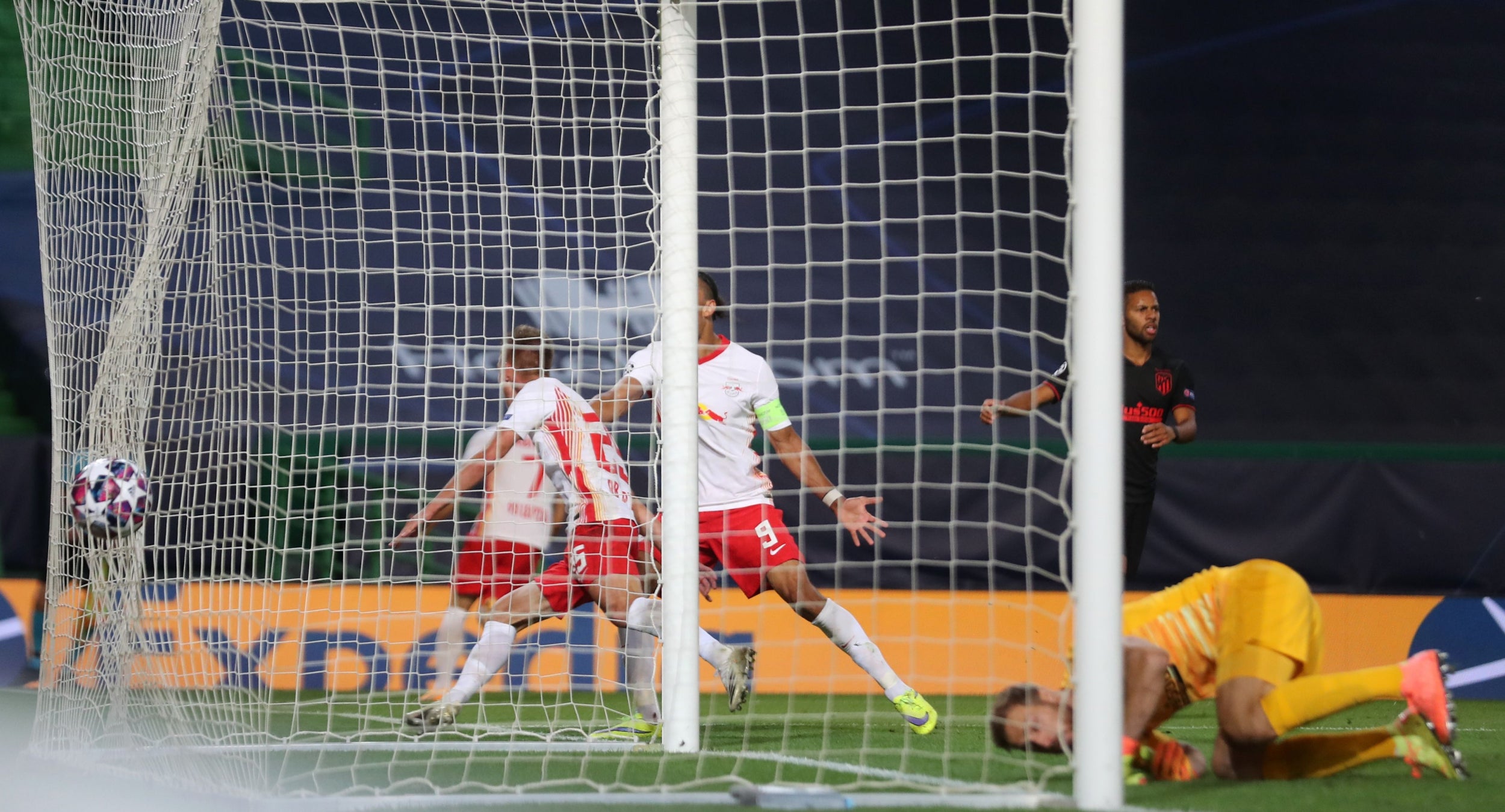 Lukas Klostermann – 6. Strong down the channel. Coped fine both centrally and in wider areas. Good passing out. Desperate tackle gave Atletico the penalty.

Dayot Upamecano – 9. Not sure he missed a single challenge, aerial duel or opportunity to dribble out of defence. A class apart at times.

Marcel Halstenberg – 7. Had a good chance early on. Diligent with his tracking and tackling.

Konrad Laimer – 6. A decent outlet and full of running, but the delivery was disappointing at times.

Marcel Sabitzer – 8. Excellent on the ball. Always attacked the space, picked the right pass and delivered a perfect cross for the opening goal.

Kevin Kampl – 8. Like Sabitzer he was superb in possession. Played the slightly more defensive-minded role, but always forward-thinking on the ball.

Angelino – 6. Got into so many good areas of the pitch, only to disappoint with his final pass or cross.

Christopher Nkunku – 7. Frustrating; showed great footwork and link play at times, but dribbled into blind alleys and missed a couple of simple passes too.

Yussuf Poulsen – 5. Hard work comes as standard for Poulsen but he lacks the finishing touch as a No. 9 at this level. 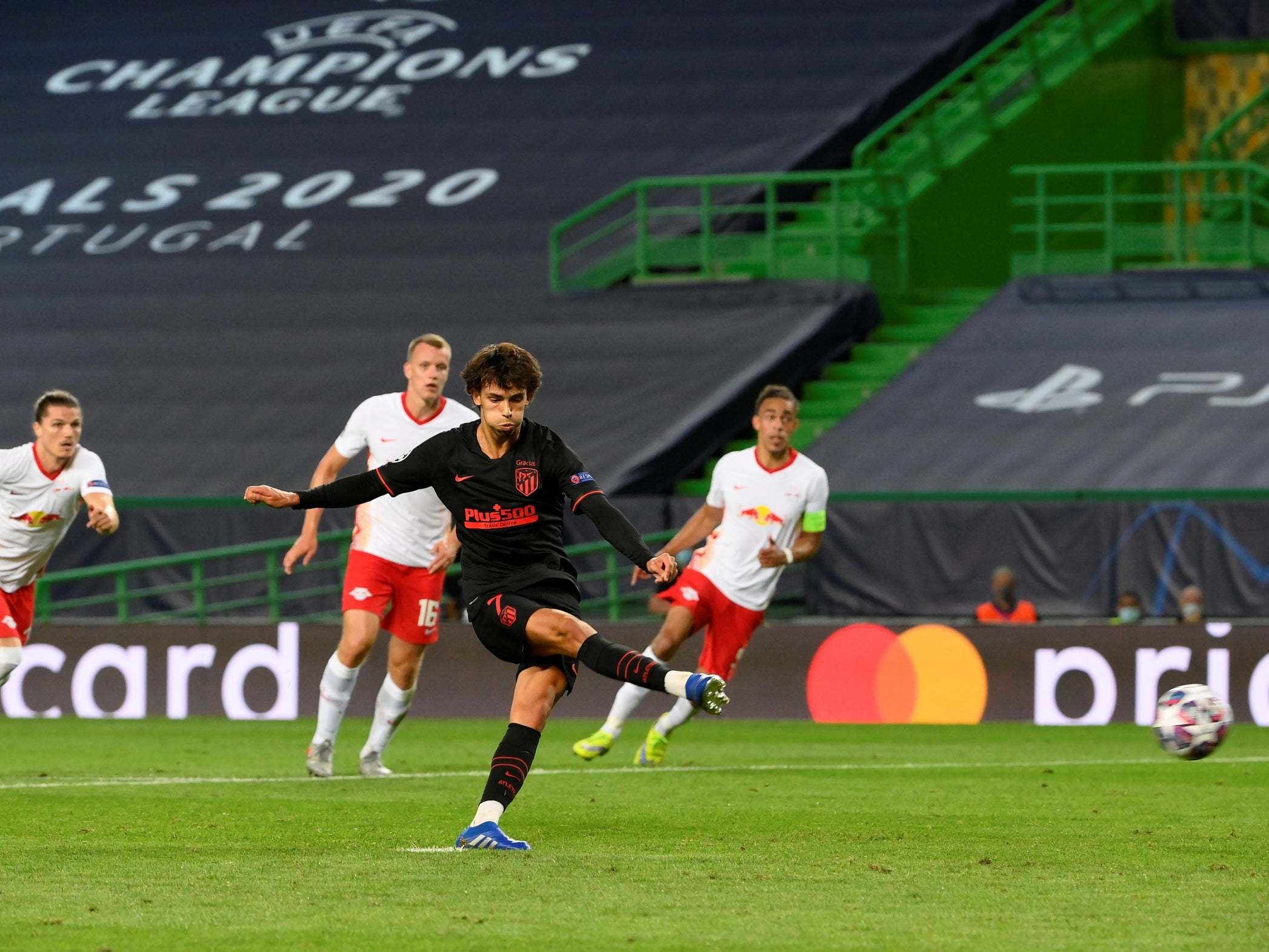 Jan Oblak – 6. Made one routine save, could do nothing about either goal.

Kieran Trippier – 5. Didn’t get to see much of his usual good crossing. Struggled against Angelino and Nkunku.

Josema Gimenez – 7. Usual fully committed display but did give a few poor fouls away.

Renan Lodi – 7. The best outlet for Atletico most of the game. Booked for a poor dive trying to win a penalty. Deserved more of the ball when he rampaged forward.

Hector Herrera – 5. Played as the narrow right-sided midfielder but had very little impact on the ball and left his right-back isolated at times.

Koke – 6. In and out of the game. Neat on the ball as usual but didn’t really offer much invention going forward.

Yannick Carrasco – 7. Started very brightly, forced a save and made a few dribbles, but faded hugely.

Marcos Llorente – 6. Had no success running off Costa or trying to bully the Leipzig defence.

Diego Costa – 4. Poor with his attempted hold-up play and was dominated in the air by Upamecano. Spent much of the game asking for fouls as he couldn’t actually win the ball himself.

Related posts:
Basketball News:
NBA playoff bracket 2020: Updated TV schedule, scores, results for the conference finals
FIFA 21 EA Play: How to play the game early with a 10-hour trial
Novak Djokovic sends Rafael Nadal warning over French Open after Italian Open triumph
MLB News:
‘This isn’t fun’: How everyone in baseball has navigated a very different season
NFL fines Broncos, 49ers, Seahawks for violation of face-covering rules
Florida’s decision likely clears Kraft of charges
Recent Posts
This website uses cookies to improve your user experience and to provide you with advertisements that are relevant to your interests. By continuing to browse the site you are agreeing to our use of cookies.Ok