Former NRL executive Shane Mattiske can see "real potential" ready to be unlocked in both the Newcastle Jets – the struggling club he has been tasked with nursing back to full health – and the A-League overall.

Highly-respected sports administrator Mattiske was on Monday appointed as the executive chairman of the Newcastle Jets, who have been bought out by a consortium of rival club owners after the club’s licence was stripped off Chinese businessman Martin Lee. 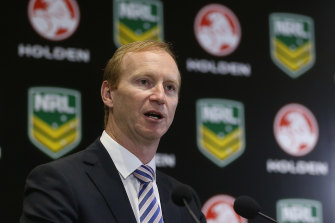 Best known for his 15-year stint in rugby league – which included a six-month period as interim NRL chief executive after the resignation of David Gallop – Mattiske has, in more recent years, worked as a broadcast rights advisor for Nielsen Sports and Rugby Australia, and helped negotiate Football Australia's previous six-year deal with Fox Sports in 2016.

Lured into football by former colleague Danny Townsend, the chief executive of Sydney FC, Mattiske believes there are blue skies ahead for the A-League, which has struggled off the field for several years but is now being run by a club-controlled entity called Australian Professional Leagues after being officially 'unbundled' from Football Australia.

"There's winds of change blowing and the A-League is well positioned," Mattiske said. "It's similar to Newcastle [Jets] in a way – it's got all the right fundamentals [to succeed] and there are now significant structural changes that are going to support growth.

"I think there is a strong future. It will rely heavily on the commitment of the fans and the broader community and that is critical.

"Nothing's assured – we need people to stand up and get behind the competition, but it has real potential and these changes are going to help us unlock that potential."

A consortium led by the owners of Sydney FC, Western Sydney and Western United have pooled funds together to save the Jets from oblivion, with Mattiske chosen to spearhead the club's rehabilitation.

Mattiske was confident that conflicts of interest involving the Sky Blues, Wanderers and Western United could be managed with the right governance and management frameworks. 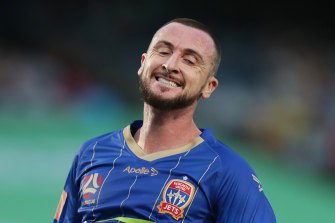 The Newcastle Jets made a grand final in 2017 but have endured a difficult few years since, on and off the field. Credit:Getty

"The governance of the club is going to be really important. It's why there is an independent chair in place, and we will look to bring on independent directors who have got a connection into the Newcastle and broader region," he said.

"We will put in place structures – and we're already putting those in place – around matters like player recruitment and football decisions so that there aren't conflicts that occur because of the higher-level ownership interest. We're aware of all that … I don't see it as an issue moving forward."

Mattiske stressed that the consortium in place should not be seen merely as "interim owners" but businesspeople who have made a serious commitment towards the club and the region.

Their plan is to re-engage with the Hunter community, find and secure locally-based investors, and then gradually hand the Jets over to a new ownership group.

"We're in a position where we can move in stages. We've got time and we'll take time," Mattiske said.

The Jets play their first home game on Friday night against the Wanderers and are offering $10 tickets for adults and $5 for juniors in recognition of the club's "fresh start".

Mattiske was non-committal on whether a permanent coach would be appointed to replace caretaker boss Craig Deans, who sources say has strong support from the playing group. Gary van Egmond, who has served as Jets coach in two separate stints, has already been linked to the job.

Arthur Papas, an assistant coach to Ange Postecoglou at Yokohama F. Marinos who is regarded as one of Australia’s brightest young tacticians, had been lined up to coach the Jets in the event of a successful ownership takeover last year. However, the uncertainty surrounding the club prompted him to look at other options and he has since been appointed as the head coach of third-tier Japanese side Kagoshima United.

The Jets have racked up several million dollars in debt over the past 18 months but Mattiske said the club was now being run by a new and entirely separate corporate entity, and that previous liabilities were being addressed by Lee.

"Martin Lee is the owner of the old entity and Martin Lee is working through that at the moment, from our understanding," he said.

As for Lee's chief executive Lawrie McKinna, Mattiske said he had "great respect" for the job he had performed under difficult circumstances and wants him to be a part of the club going forward.

McKinna, who was a director of the previous company that held the Jets' licence, did not return calls from the Herald on Tuesday.