Two of the City figures who led an attempt to prise Manchester United from the Glazer family’s control a decade ago have urged them to loosen their grip in the wake of this week’s European Super League debacle.

Sky News can reveal that Lord O’Neill – the architect of the Red Knights campaign in 2010 – and the hedge fund manager Sir Paul Marshall have written to Joel Glazer, the Manchester United co-chairman, to demand a string of immediate corporate governance reforms.

In the letter, which was sent on Friday morning and has been seen by Sky News, the pair told Mr Glazer that his family should scrap the New York-listed club’s dual-class share structure and introduce a single class of voting stock. 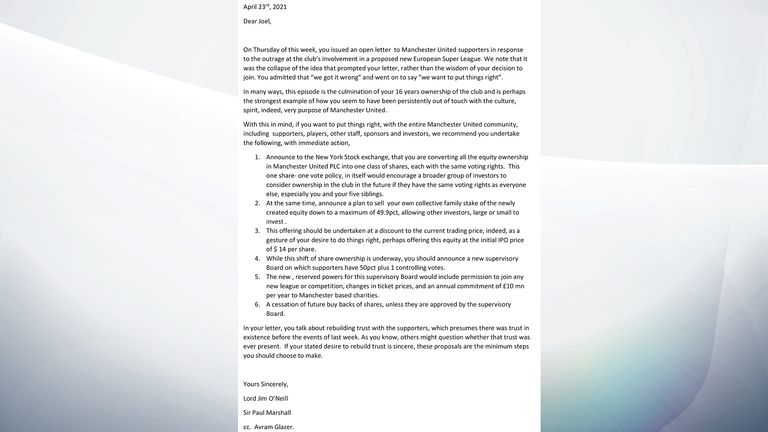 The Glazers should also, according to the letter, commit to reducing their combined stake from the current level – which stands at roughly 75 per cent – to a maximum of 49.9 per cent.

These moves would, Lord O’Neill and Sir Paul argue, “encourage a broader group of investors to consider ownership in the club in the future if they have the same voting rights as everyone else, especially you and your five siblings”.

They added that the family should reduce its stake to below 50 per cent by selling down part of their shareholding at the original $14 IPO price “as a gesture of your desire to do things right”.

The duo’s intervention is significant, because it hints at the most concerted move in a decade by those involved in the original Red Knights agenda to revive their efforts to oust the Glazers.

Sources close to them insisted that their joint letter did not amount to the formal resurrection of the Red Knights, but acknowledged that it put their campaign for change at Old Trafford “back on the agenda”.

By deciding to write jointly to Mr Glazer, they have also underlined the potentially far-reaching implications of the most tumultuous few days in the recent history of English football. 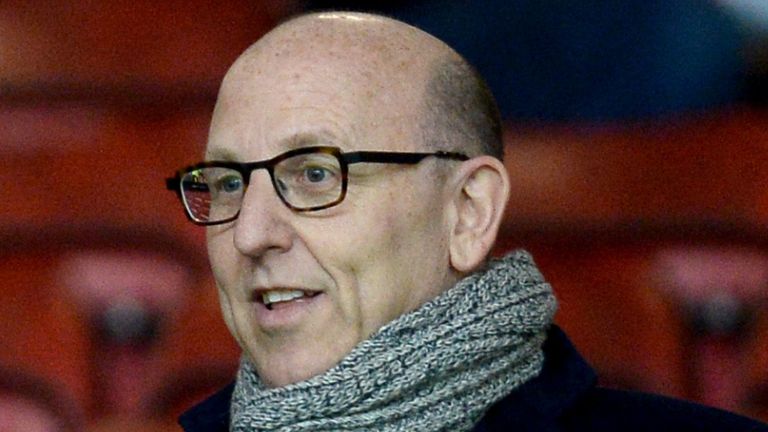 The vehemence of the response convinced the six to abandon the project two days after it was confirmed, and has triggered a chain reaction of events which could ultimately lead to legislation governing football club ownership in England.

In 2010, Lord O’Neill and Sir Paul were the principal architects of the Red Knights consortium that attempted to corral sufficient support to mount a £1.25bn takeover bid for Manchester United. 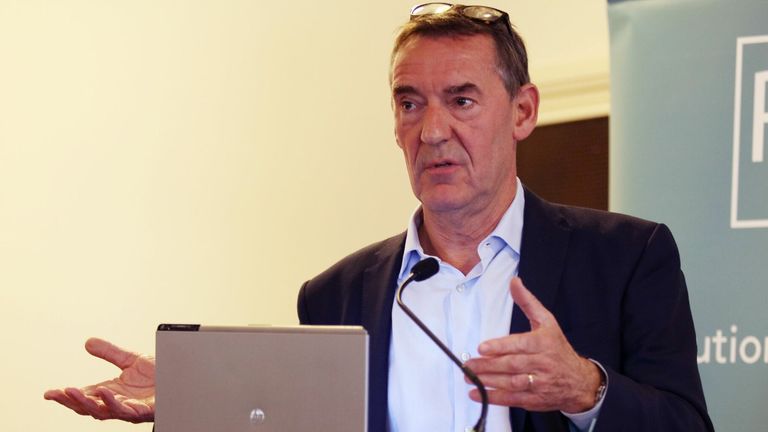 Despite recruiting other prominent City names, they concluded that their campaign was destined to fail and ultimately abandoned it.

The Red Knights was conceived as a vehicle to express frustration at what many Manchester United fans perceived to be a lack of investment and interest in arguably the world’s most famous football club under the Glazers’ ownership.

The US-based family took control of the club in 2005 in a debt-fuelled deal and, despite frequent rumours of interest from Saudi Arabia and elsewhere, do not appear to have come close to relinquishing their hold since.

Since Sir Alex Ferguson’s retirement as manager in 2013, the side has failed to win another Premier League title, and won only three trophies in the period since.

Although members of the Glazer family have sold chunks of equity at various points since the initial public offering, they retain an iron grip on Old Trafford by virtue of their dual-class stock.

In their letter to Mr Glazer, they requested that the Glazers create a new supervisory board on which Manchester United fans would have overall voting control.

This board would have powers including a veto on “join[ing] any new league or competition, changes in ticket prices, and an annual commitment of £10m-per-year to Manchester-based charities”.

It would also have the ability to block any future share buybacks by the company, according to the letter.

Lord O’Neill, the former Goldman Sachs chief economist and one-time Treasury minister, has been among many vocal critics of the European Super League since confirmation of its existence at the weekend.

He told Bloomberg News on Thursday that the ESL project was “one of the most ridiculous proposals I’ve ever seen in my life”, and questioned why JP Morgan Chase, the Wall Street behemoth, had signed up to finance it.

On Friday morning, JP Morgan issued a statement about its role, saying it had “clearly misjudged how this deal would be viewed by the wider football community and how it might impact them in the future”.

Earlier this year, Lord O’Neill was among those shortlisted for the chairmanship vacancy at the Football Association before he withdrew as a result of the role’s time commitments.

The letter from him and Sir Paul followed a public apology from Mr Glazer, in which he said that the owners had “got it wrong, and we want to show that we can put things right”.

“Manchester United has a rich heritage and we recognise our responsibility to live up to its great traditions and values,” Mr Glazer wrote.

“The pandemic has thrown up so many unique challenges and we are proud of the way Manchester United and its fans from Manchester and around the world have reacted to the enormous pressures during this period.

“We also realise that we need to better communicate with you, our fans, because you will always be at the heart of the club.”

The ESL project epitomised a long-standing desire on the part of Europe’s wealthiest clubs and their owners to capture a bigger slice of the sport’s commercial and broadcast revenue.

The pandemic’s impact on their balance sheets accelerated the ill-fated project, according to insiders, with sources telling Sky News last October that the participating clubs would receive hundreds of millions of pounds each for signing up.

The letter from Lord O’Neill and Sir Paul said the Super League episode was “the culmination of your 16 years ownership of the club and is perhaps the strongest example of how you seem have been persistently out of touch with the culture, spirit, indeed, very purpose of Manchester United”.

“In your letter, you talk about rebuilding trust with the supporters, which presumes there was trust in existence before the events of last week,” they wrote.

“As you know, others might question whether that trust was ever present. If your stated desire to rebuild trust is sincere, these proposals are the minimum steps you should choose to make.

Other English clubs which had signed up to the ESL have also face bitter criticism for their involvement, with Chelsea and Liverpool fans among those staging major protests outside Stamford Bridge and Anfield respectively.

A government review, as well as a separate project undertaken by the Premier League, will now examine various aspects of football club ownership and the sport’s governance in an attempt to prevent future breakaway efforts.