Reims vs PSG LIVE: Lionel Messi is on the bench for Mauricio Pochettino’s men as Kylian Mbappe, Neymar and Angel di Maria lead the attack for the French giants in their bid to reclaim top spot in Ligue 1 at the Stade Auguste Delaune

Lionel Messi is expected to make his Paris Saint-Germain debut when they travel to Reims on Sunday.

The Argentina star has yet to make his Ligue 1 bow after leaving Barcelona on a free transfer but is set to start along with Neymar and Kylian Mbappe in a formidable attacking line-up.

Mauricio Pochettino’s men have won all three of their league fixtures this season and will look to reclaim top spot with another victory at the Stade Auguste Delaune.

Tonight’s hosts have drawn all three of their opening matches: 0-0 at Nice, 3-3 against Montpellier here and 1-1 at Metz.

Moreto Cassama scored their first two goals in their first home game. The 23-year-old played for Portugal at youth level before switching to Guinea-Bissau, where he was born. 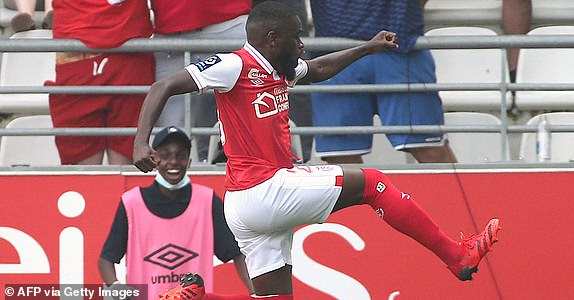 Mbappe is warming up here. He could go outright top of the Ligue 1 scoring charts should he score a hat-trick tonight. Mbappe starting doesn’t look like great news for Madrid’s prospects of signing the France forward. Sportsmail reported that the Liga giants had given PSG until tonight to agree a deal, and the transfer window closes on Tuesday.

The club’s top scorer with 27 goals last season, Mbappe was on target in the 36th minute as PSG won 4-2 at Brest last time out. You can read the full story about Madrid’s ultimatum below.

Just in case anyone thought Harry Kane would be the most watched player on a substitutes’ bench this season, the news developing here is that PSG are about to eclipse that seismic piece of teamsheet news. We’re awaiting official confirmation, but it seems as if Kylian Mbappe will start and Messi will be kept in reserve from the off.

Not a bad option to bring on if PSG’s run of successive wins to start the season looks in danger a little later on. 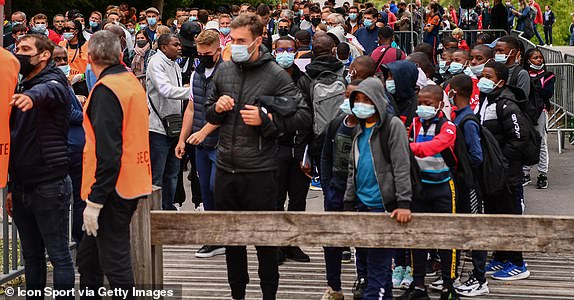 Good evening and welcome to Sportsmail’s coverage of a sight many football fans thought they would never see: Lionel Messi playing for a European club apart from Barcelona. Messi has arrived at the Stade Auguste Delaune, strolling in wearing a mask and a PSG tracksuit after the Ligue 1 favourites’ team bus arrived for tonight’s Ligue 1 clash.

Will Messi start? Will he be alongside fellow superstars Kylian Mbappe and Neymar in a potentially terrifying PSG forward line? We’ll have all the latest for you ahead of what is expected to be his debut for the club he joined less than three weeks ago. 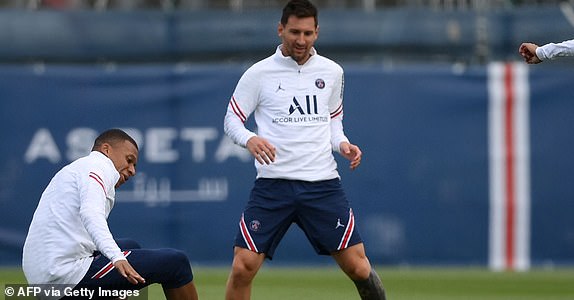