Report and highlights from the Sky Bet Championship clash between Rotherham and Coventry at the New York Stadium as Leo Ostigard scored the winner for the Sky Blues, lifting them six points clear of the Millers and the relegation zone

Coventry took a big step towards Championship safety as Leo Ostigard’s goal earned them a massive 1-0 win at Rotherham on Thursday night.

Defeat would have left the Sky Blues in the bottom three, but Ostigard’s 70th-minute header saw them instead move six points clear of the Millers in 22nd – although they do still have two games in hand – and up to 18th in the table.

Rotherham, who were playing their second game in 48 hours in a manic week for them as they play catch-up on all the sides around them, are now four points adrift of safety. 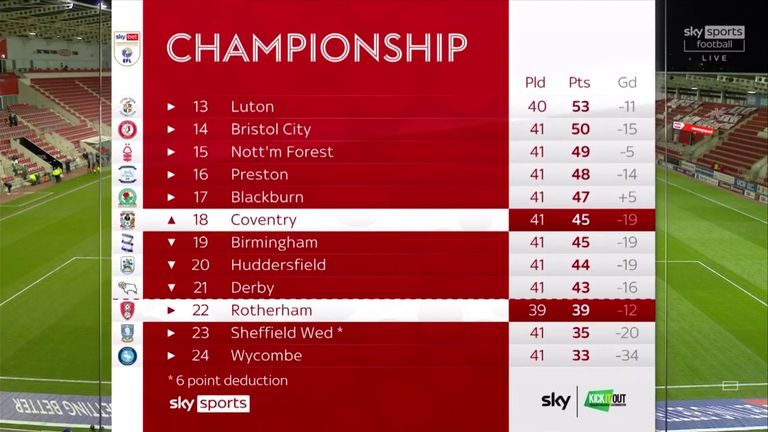 They do, however, still have two games in hand on all the sides above them, so there is still plenty of hope for Paul Warne’s side. 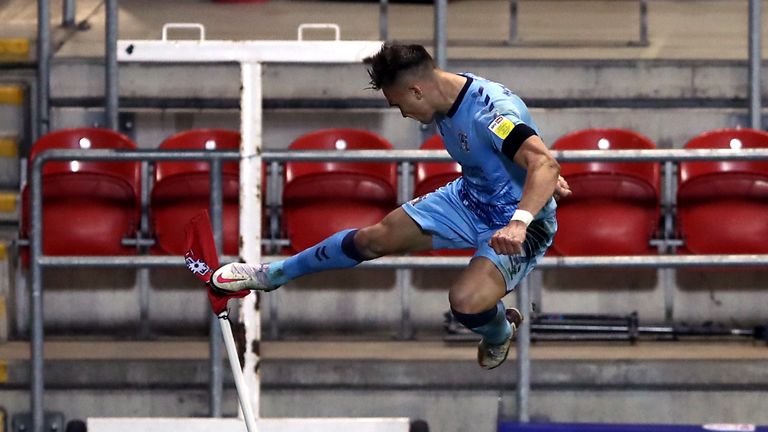 Coventry had the worst away record in the Championship heading into the game, but you wouldn’t have known it from the way they started the game.

Were it not for three brilliant saves from Rotherham goalkeeper Viktor Johansson, they would have been in a comfortable lead at the break. After just 43 seconds he acrobatically tipped a dipping Liam Kelly volley that was destined for the top corner onto the bar. 10 minutes later he denied Callum O’Hare from point-blank range, before Matty Godden fired over from a position where it seemed harder to miss, and after 35 minutes he was on hand to palm away a Tyler Walker header at the far post.

Rotherham were comfortably second best in the first 45 minutes, but did produce one great opportunity to score, as on-loan midfielder Lewis Wing thumped a fierce drive against the post from a tight angle.

Things got a lot tighter in the second half and chances were at a premium, but eventually Coventry did find their way past Johansson. It did, however, take a slice of fortune, as Ostigard’s towering header took a big deflection off of Wes Harding – who had given away the free-kick from which it came – and into the bottom corner.

Rotherham’s Paul Warne: “Coventry played better than we did. Our goalkeeper made loads more saves than theirs, they were the better team and I have no complaints about the result. They were more physical, more direct, and they beat us up really. Not in a bad way, they thoroughly deserved it. The first 20 minutes rattled us and we never really got into the game. I know we hit the post, but that would have put the gloss on a poor performance.

“I’m not using [the fixture pile-up] as an excuse. There is a psychological element to it, and there were some tired legs. We didn’t seem as sharp and as bright on the ball today, and apart from the Wycombe home game it was the most disappointed I’ve been with us this season. But we know there will be ups and downs for the rest of the season, and we have to try and get them ready for Sunday now.”

Coventry’s Mark Robins: “I thought we were really good right from the start. Their goalkeeper has made three outstanding saves, and you’re looking at it and thinking that’s the story of our season.

“But the players were right up for it, they’re a really difficult team to play against, and it was difficult for them off the back of the run of games they’ve had. But for us it’s a really good night’s week, and a clean sheet away from home is really big for us. It gives us a platform and now we look up and look forward to a tough game against Barnsley at home.”

Man of the match – Leo Ostigard

“It’s a goal that could keep Coventry in the Championship. He put in a brilliant individual display and his contribution at the back was also brilliant.”

Rotherham host Birmingham live on Sky Sports Football on Sunday. Coverage gets under way at 11.30am, with kick-off at midday. Coventry face Barnsley at 3pm the same day.