Report and highlights from the Sky Bet Championship clash between Rotherham and Watford at the New York Stadium as Francisco Sierralta, Ismaila Sarr, Ken Sema and Dan Gosling netted in a comfortable Hornets win

Rampant Watford rattled off an eighth win from their last nine matches following a 4-1 romp at Rotherham.

Chile international Francisco Sierralta opened the scoring with his first goal in English football and further efforts from Ismaila Sarr and Ken Sema put Xisco Munoz’s men firmly in the ascendancy at the break.

After Michael Smith had a penalty saved for the Millers, Freddie Ladapo pulled a goal back in spectacular fashion but Dan Gosling swiftly responded to extinguish any hopes of a comeback.

Rotherham had earlier started with purpose as captain Richard Wood hooked an edge-of-the-box attempt wide of the visitors’ goal. 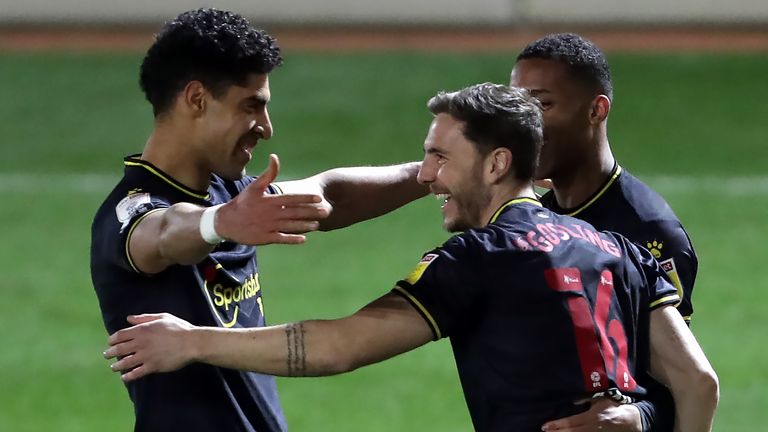 But it was the Hornets who forged ahead following their first forward raid of the game.

Sarr’s deflected blast across the face of the home goal led to successive corners and Philip Zinckernagel’s left-wing delivery was headed over stranded ‘keeper Jamal Blackman by Sierralta on nine minutes.

At the other end, Smith was less clinical when he missed the target after rising high to meet Dan Barlaser’s free-kick and Watford went on to double their lead on 26 minutes.

Another curling Zinckernagel cross from the left was only palmed out as far as Sarr by Blackman and the Senegalese attacker found the roof of the net from eight yards with an emphatic finish.

After Ladapo’s ambitious 30-yard strike bounced wide for Rotherham, Blackman was then at full stretch to keep out a Nathaniel Chalobah effort from just outside the penalty area.

But the respite was short-lived as Sema drilled a low shot inside Blackman’s left-hand post after being picked out on the edge of the box by Zinckernagel’s corner.

Matt Olosunde’s side-footed 15-yard shot called Watford ‘keeper Daniel Bachmann into his first save of the night on 42 minutes, but Blackman still had to be quick out of his goal to deny Sarr when clean through before the break.

Less than three minutes into the restart, Wood made an excellent block to direct Joao Pedro’s strike away from goal.

But Rotherham wasted an opportunity to reduce the deficit just past the hour after William Troost-Ekong was adjudged to have clipped Smith as he chased a long ball through the right channel and, after lengthy deliberation, referee Jeremy Simpson pointed to the spot.

Smith took the penalty, only for Bachmann to make a brilliant save low to his right.

The Austrian ‘keeper was powerless on 68 minutes when Ladapo’s 20-yard stunner swerved into his top-left corner but, within seconds, Watford netted for a fourth time as substitute Gosling found an inviting net after Blackman had parried a shot from fellow replacement Andre Gray.

The result meant Rotherham have now lost four consecutive home games, as well as their last five contests against Watford.