Sarina Wiegman acknowledged it would be difficult for England to better 2022 but promised she would do everything she could to improve her team to ensure they “bring it home” again at the World Cup next year.

The Lionesses have enjoyed a memorable 12 months with the pinnacle victory over Germany at Wembley in July to secure a maiden European Championship title.

England went undefeated throughout the whole year, won the Arnold Clark Cup in February and beat current world champions the United States in September to make this the best professional year of their coach’s life despite the ex-Netherlands boss also guiding her country to Euro’s glory in 2017.

“You can’t beat that. You can only get equal on that,” Wiegman admitted when reflecting on 2022 at Wembley.

“That year in 2017, from when I got appointed in January and then got into the final and we won the Euros, that was really successful and very enjoyable too, but this is a little, it’s different. It’s even more consistent. 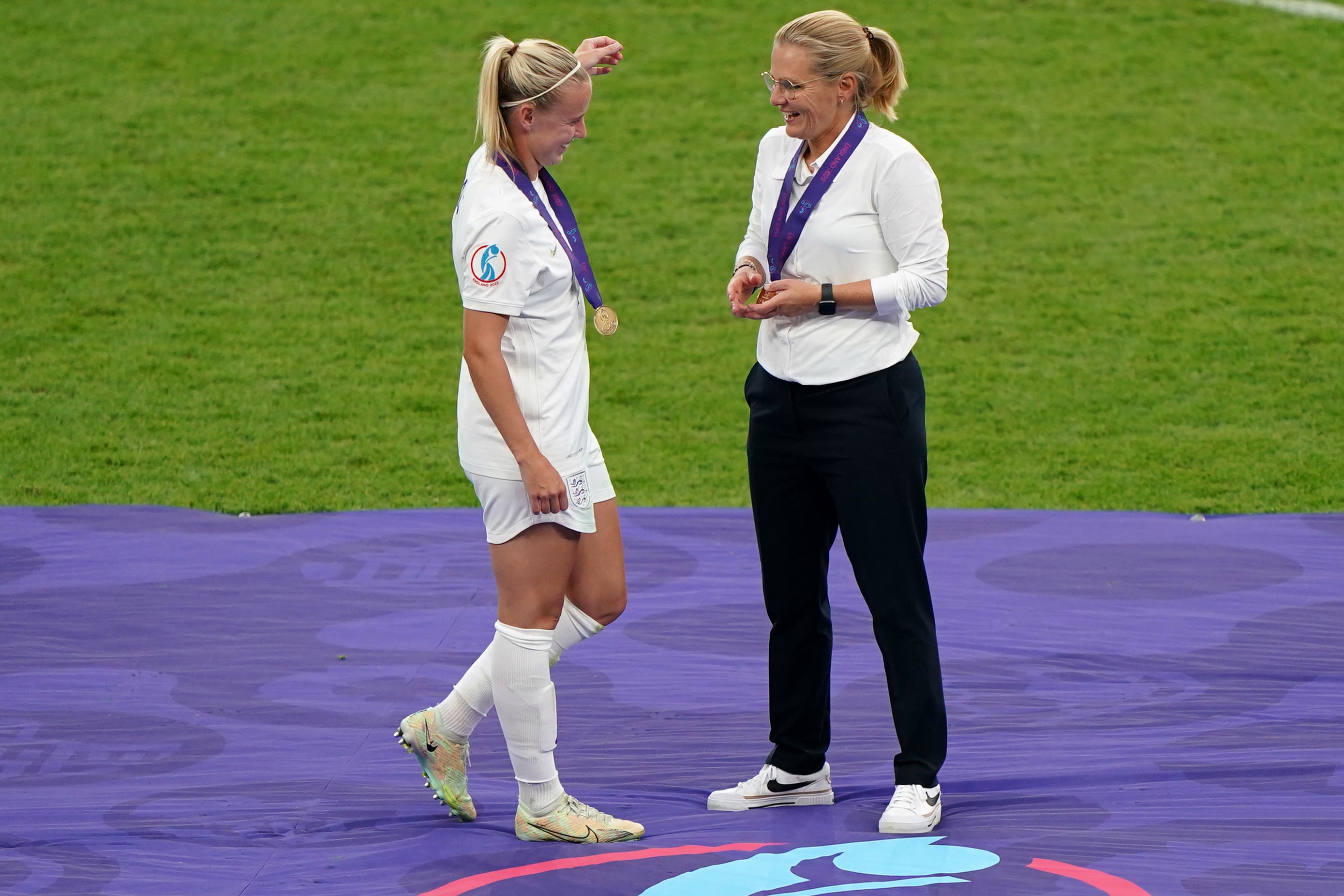 “And the England team was in a different stage than the Netherlands. Here, when I got appointed, a lot of the remarks were ‘are you going to bring it home?’ And ‘you’ve been brought in to win the Euro’s’ – which is a lot of pressure.

“(But) I think we have to get better. I think the game develops so quickly. We have to take our game to the next stage to make the chance of being successful (in Australia) as high as possible.”

A key facet of Wiegman’s management is taking away the importance of the result with a big focus on performance.

While she is associated with preparing for all scenarios, even the 53-year-old from the Hague could not have predicted how much this summer would change the lives of her players.

Wiegman added: “The pressure has been there all the time. There is pressure, we know, and when you win, the pressure will be higher and higher. That’s just the way it works.

“My concerns are; how can you balance performing at the highest level, sustaining that and what keeps us here?

“Some players are really young. Within six weeks they became famous English people. Some players can’t walk down the street anymore without being almost mobbed. That’s a big thing in your private life. You need time to adapt.”

Within six weeks they became famous English people. Some players can’t walk down the street anymore without being almost mobbed. That’s a big thing in your private life. You need time to adapt.

The back-to-back Euro’s-winning coach joked she was “very lucky” to win this summer’s tournament but provided an insight into her methodological planning during a media day at the home of football earlier this month.

After taking charge following the Olympics in 2021, Wiegman set about seeking answers from the current crop on why they had fallen short at the last hurdle previously and realised they needed to manage games better.

Key tweaks in training would occur against specific teams, focusing more on the final third against Luxembourg compared to Spain but the Arnold Clark Cup in February was a crucial moment in the Lionesses’ development.

Needing a goal to beat Germany and win the trophy, Wiegman had already quizzed her players pre-match if they wanted to go for the win and they did with centre-back Millie Bright thrown up front to good effect. It was a tactic employed again to beat Spain in the last eight at the Euros.

It was an “unpredictable” part of England’s game that their coach was keen to keep but she had no desire to settle scores after she finished runner-up to the USA with Netherlands at the last World Cup.

“When you say we have to become world champions, well of course we have this dream. We are not going to this World Cup just to play, we’re going there to win but that is not always what you can control.

“I was devastated against the USA but I did think they were better at that point.

“But no, I don’t really think about revenge. I just think I want to do better in the next game and win.”