‘How can we give him the Argentina job! Are we all crazy?’

Fast forward four years from that conversation with Argentina’s Pibe de Oro (Golden Boy) and Scaloni stands on the cusp of delivering his nation’s first World Cup since Maradona was thrusting it high into the Mexico sky, sat atop the shoulders of his team-mates inside a packed Azteca. 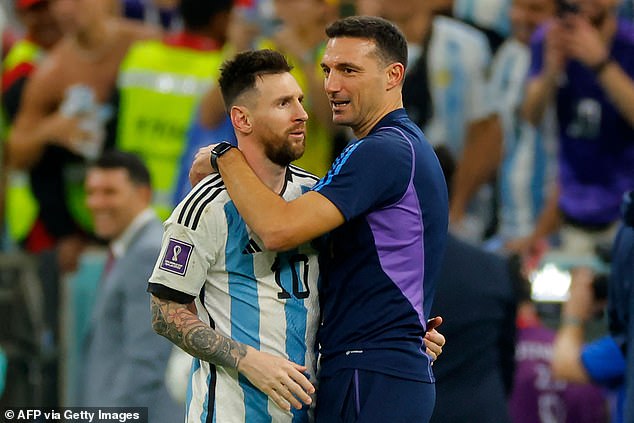 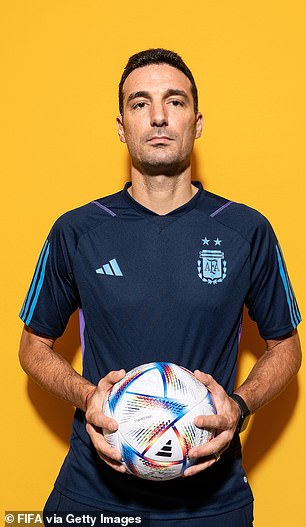 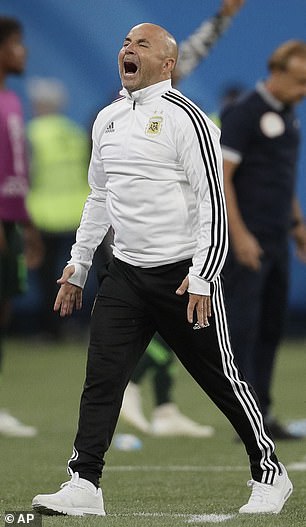 Scaloni (left) was viewed as a cheap, rookie option to replace Jorge Sampaoli (right) in 2018

Proving doubters wrong has become part of the job for Scaloni ever since he was appointed successor to Jorge Sampaoli, who had completely destroyed relations between coach and players at a dismal 2018 World Cup.

And criticism is nothing new for Scaloni, not least with nightmares of the 2006 FA Cup final routinely brought up in England.

Seconds left and Scaloni, then on loan at West Ham, just has to boot it as far as he can to get it away from West Ham’s goal. Instead, he doesn’t get enough on it, Liverpool recover and after a floated cross into the box falls to Steven Gerrard well, the rest is history.

‘The world came crashing down on me,’ Scaloni said of that nightmare finish in Cardiff. ‘I lost an FA Cup, it was partly my fault because I didn’t clear well, and life changed.’ 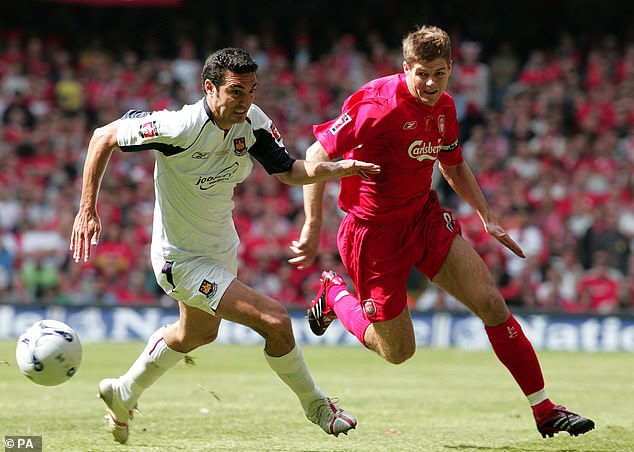 On English shores he is remembered for his error in the 2006 FA Cup final, which saw Steven Gerrard (right) score seconds after Scaloni (left) gave the ball straight back to Liverpool

So, criticism and derision at his hiring by Argentina will have been a case of familiar territory for a man as mentally resilient as Scaloni.

Argentina had gone from runners-up in Brazil in 2014 to a miserable last-16 exit to France, who they face in Sunday’s World Cup final. There was plenty of work to do.

Scaloni was on the coaching staff in Russia as one of Sampaoli’s assistants and he saw first hand exactly how not to manage this Lionel Messi-led group at a major tournament if he had any plans of actually winning the thing.

There was a moment in Russia where Argentinian found itself at risk of undoing all their work and blowing it to smithereens.

‘We don’t get what you’re saying,’ Messi barked at Sampaoli as tensions flared. ‘We no longer trust you. We want to have an opinion.’

Chagrin at defeat to France brought the end of the Sampaoli era and while the Argentinian FA (AFA) deliberated on who would be his successor, Scaloni was tasked with keeping things ticking over in two friendlies against Guatemala and Colombia.

‘We’re going to be more direct and vertical,’ Scaloni said, not sounding convincingly like a man who was only around for two games. 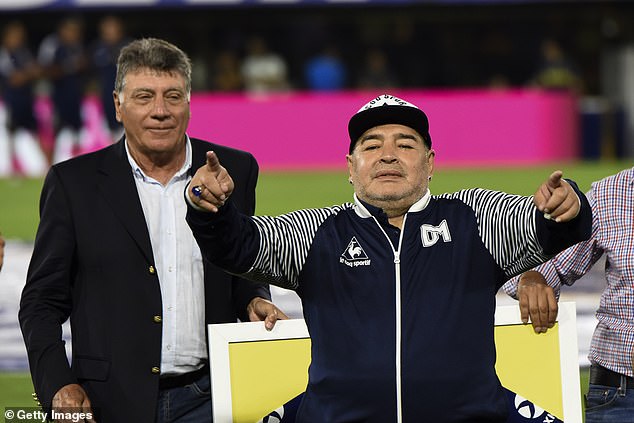 Quickly the AFA asked him to stick around until the 2019 Copa America. Even losing his first competitive match in charge – a 2-0 loss to Colombia to start that tournament – Argentina were shaking off the side-effects of Sampaoli ball and were finding a groove.

‘The project is evolving and the national team is gaining an identity and that’s what we want,’ the AFA said.

Scaloni, the youngest coach at the World Cup in Qatar, had played at a World Cup – in 2006, specifically – and had experience on the other side of it as an assistant in Russia. He knew what both sides of the coin were like when it came to major tournaments.

‘I never worried about sitting in front of a group and speaking honestly, plainly. You can lie to them once, but the second time they call you out,’ Scaloni said in an interview earlier this year.

‘It’s important that when the players go out into the field they’re convinced of what the coach says. I think we’ve been able to achieve that.’

One of the biggest criticisms levelled against Scaloni is that his coaching CV doesn’t stack up to his rivals. 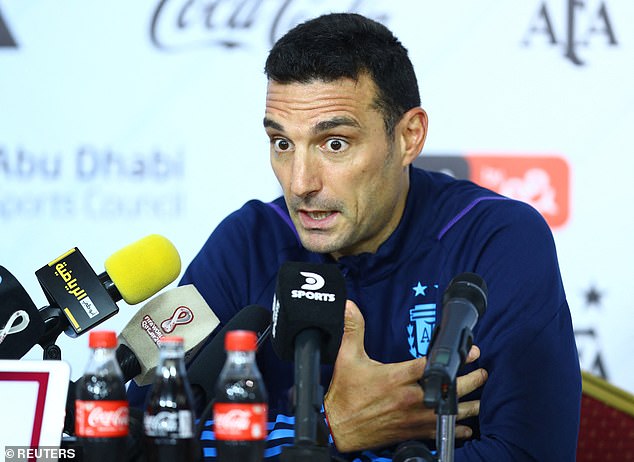 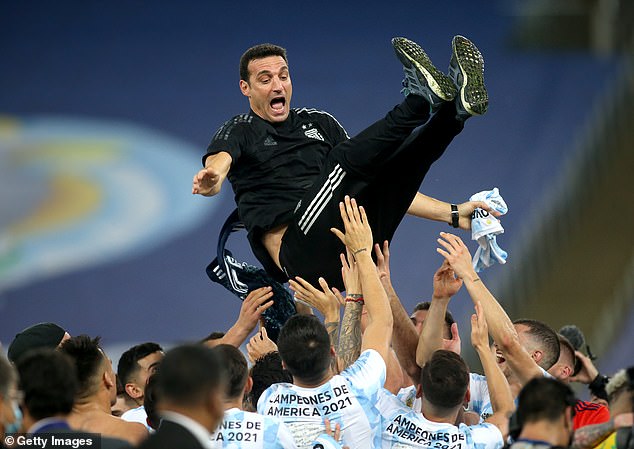 Scaloni began coaching at Sevilla as an assistant to Sampaoli in 2016, before following him to the national team.

So, here he was at the 2019 Copa America trying to end his nation’s 26-year wait for a title with no senior management experience. Maradona wasn’t alone in questioning the logic behind the move.

But the former right back, who, like Messi, hails from Newell’s Old Boys in Rosario was something of a whisperer to players who had gone from disillusioned with the national team to making it their absolute focus.

‘He’s very personable, talks a lot with the players and tries to be there for whatever is needed,’ Messi said of his boss previously. ‘It’s evident… he loves what he does.’

‘In Russia, he was the closest to the players,’ added full-back Nicolas Tagliafico. ‘He talked a lot with us and created a bond between the team and the coach.’

Argentina would go on to finish third in the 2019 instalment of the Copa America and a three-and-a-half-year deal soon landed on Scaloni’s desk.

One of Sampaoli’s problems and Scaloni’s strengths is parking any stubbornness at the door and accepting when change is needed. 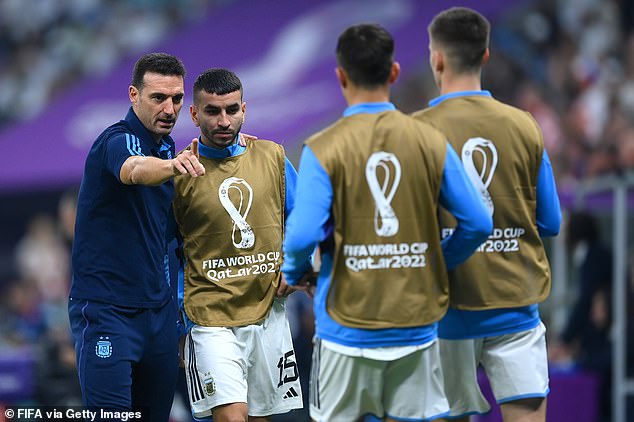 The likes of Leandro Paredes and Rodrigo de Paul soon found themselves key pieces of Scaloni’s puzzle and two years after disappointment in his first Copa America in charge, Scaloni found the pieces to finish the puzzle and end Argentina’s 28-year trophy drought. Messi, finally, had the international trophy he craved.

‘Seeing Leo win pleased everyone, as much even as the selección,’ Scaloni told the Guardian.

‘When Messi represents what he does for people, for team-mates, knowing he had been denied for so long, that’s natural. That generation reached three finals, as if that was easy! People appreciate that now. But the Copa América removed a thorn from his side.’

It was after a 3-0 win over Ecuador in the quarter-finals where many believe the ‘La Scaloneta’ (The Scaloni Bus) nickname originated. 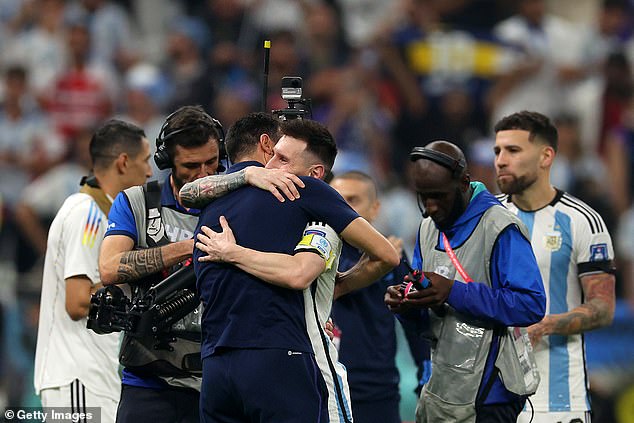 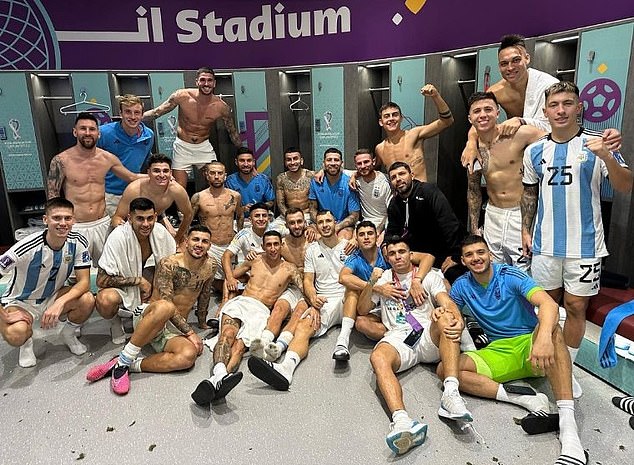 A meme had gone viral on social media of Scaloni driving a van with Messi alongside him and other players behind them.

‘La Scaloneta’ to some was about Scaloni’s rock-solid defensive team while others interpreted it as a metaphor for those who have jumped on board of his project after he got a lukewarm response to being appointed.

He now heads into the final of a World Cup that started with a stunning loss to Saudi Arabia, snapping their 36-match unbeaten run. Now few want to bet against them exacting revenge against France in what will be Messi’s final dance at a World Cup.

Whether Scaloni, who has penned a new deal to stick around until 2026, gets his hands on the trophy or not, one think the Argentinian FA weren’t in 2018 was crazy.