By Charles Paterson at Hampden Park

Lyndon Dykes’ volley secured a deserved win for Scotland against Slovakia at Hampden Park, as they extended their unbeaten run to seven matches.

Three days after a nervy Euro 2020 play-off victory over Israel on penalties, Scotland played with a greater degree of freedom against a second-string Slovakia.

While the first half was cagey and chanceless, Steve Clarke’s side improved after the break, with Dykes scoring his second international goal on 53 minutes after good play from Stephen O’Donnell.

Dykes could have had a second soon after, while substitute Oli McBurnie hit the crossbar with a late header, but Scotland were good value for the victory, which tightens their hold on top spot in Nations League Group B2.

Slovakia largely failed to trouble Scotland goalkeeper David Marshall and his defence, but it was the improvement further up the pitch that will please Clarke the most. Ryan Fraser looked bright in support of Dykes, who further staked his claim as the man to build an attack around with his goal and all-round work-rate.

Scotland are poised to reap major rewards from their previous Nations League success, and this campaign also looks fruitful. They host second-placed Czech Republic on Wednesday, when another win would place them in a strong position to win the group – the winners are guaranteed a play-off spot for the 2022 World Cup.

How Scotland saw off Slovakia to stay top 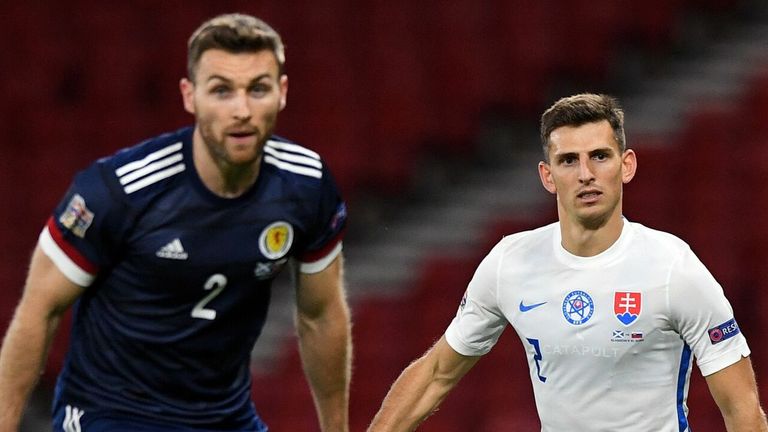 After the drama of Thursday’s shootout, this was a far less tense affair, but the match lacked an edge at times. With this being the second of three games in seven days, and both managers keeping half an eye – though neither would admit it – on their respective Euro 2020 play-off finals in November, it served as a chance for players on the fringes to stake a claim.

The scorer of Scotland’s winning penalty on Thursday, Kenny McLean started in midfield alongside John Fleck in place of Ryan Jack and Callum McGregor. Fraser joined Dykes in attack, while Aberdeen defender Andy Considine made his international debut at the age of 33 with Liam Cooper injured.

After coming through their own nerve-shredding shootout against the Republic of Ireland three days previously, Slovakia made nine changes with only captain Marek Hamsik and defender Martin Valjent retaining their places. Winger Jaroslav Mihalik, who’d started against Ireland, was ruled out after testing positive for Covid-19.

The new-look Slovaks took time to settle, and Scotland were purposeful from the off, forcing three early corners; the third of those causing alarm in the Slovak six-yard box until Dykes fouled goalkeeper Dusan Kuciak.

Former Napoli midfielder Hamsik, who now plays his club football in China, was at the centre of everything positive for Slovakia, and his set-piece delivery had the Scotland defence on alert early on, but no harm was done. He was then booked for a foul on John McGinn.

Midway through the first half Matus Beru was stretchered off with Ondrej Duda replacing him, but the change did not unduly affect the Slovaks, who were growing into the game. Scotland looked sharper than on Thursday, but all too often their attack was ponderous, rather than incisive. Fraser’s pace was troubling the Slovak backline, and Kuciak was off his line to head away a through-ball as the Newcastle winger bore down on goal. 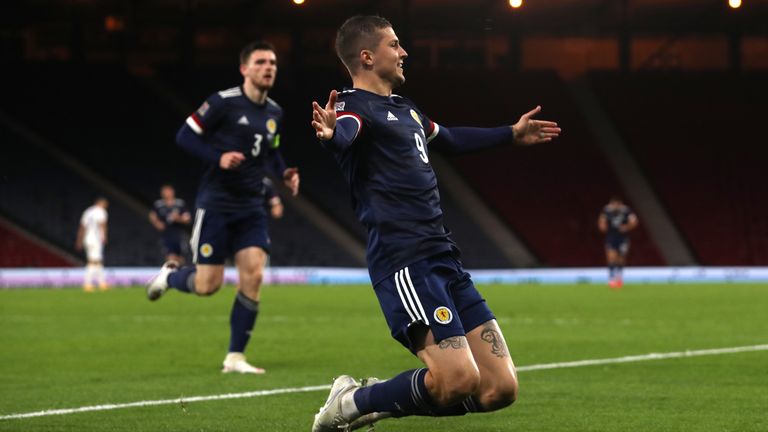 Neither goalkeeper had a save to make in the opening 45 minutes. O’Donnell dragged a shot wide from the edge of the area, Ninaj did well to block Dykes’ low drive, and Declan Gallagher headed a Fraser corner wide from eight yards under heavy pressure. Slovakia did even less to test Marshall, with Scotland comfortably dealing with any crosses into their box. Scott McTominay, in particular, looked at ease in his new position of right centre-back – a world away from his shaky performances in September.

Marshall was called into action inside the first minute of the second half to grasp Jan Gregus’ shot from distance, as Slovakia upped their tempo. Scotland responded with a Gallagher header that landed on the roof of Kuciak’s net – and shortly afterwards they took the lead.

O’Donnell played a one-two with Fraser, before clipping a first time cross towards Dykes, who lost his marker and drilled a first time shot under Kuciak. It was as beautiful in execution as it was long awaited; Scotland’s first effort on target from open play after nearly three hours of football had reaped a rich reward.

4 – Lyndon Dykes has now scored four goals in his last seven appearances for both QPR (2 in 4) and Scotland (2 in 3). Instincts. pic.twitter.com/ktPTFn9kVF

Despite falling behind, Slovakia’s threat remained. Gregus’ snap-shot from a corner was grabbed at the second attempt by Marshall, but Dykes should then have doubled the lead when he scooped O’Donnell’s cutback over the bar from 10 yards out.

Dykes then made way for McBurnie, who nearly grabbed his first Scotland goal with a powerful header from Fraser’s delightful cross, but Kuciak did well to tip it onto the crossbar. A raft of late substitutions from Slovakia failed to cause any concerns for Scotland, who saw the game out comfortably.

In the space of four days, Clarke’s squad have produced some tangible evidence of the improvement and potential that lies within. Scotland appear to have hit form at just the right time.