Sergio Aguero’s father Leonel El Castillo has accused Pep Guardiola of faking his tears when he paid an emotional tribute to the striker during an interview with Sky Sports.

The 33-year-old striker was unveiled at the Nou Camp this week after agreeing to join Barcelona as a free agent when his Manchester City contract expires.

Aguero’s departure from the Etihad was announced at the end of March after Guardiola informed City’s record goalscorer of the club’s decision not to renew his deal.

After the striker’s final Premier League appearance – against Everton in a 5-0 win on the final day of the campaign – Guardiola broke down in tears when talking about Aguero, who scored 260 goals in 390 appearances for the club.

Guardiola said: “We love him so much – he is a special person for all of us. We can not replace him.”

However, in an interview with Argentinian station Radio La Red, Aguero’s father said: “I don’t believe his tears. No, I don’t. For me, he never wanted [Aguero].

When asked if he thought the tears were for the cameras, he said: “Of course. He always wants to be the main man and not the players.”

“I don’t believe in Guardiola. He never wanted the Champions League trophy, he wants to be the protagonist of all the teams.”

“There are things about Guardiola, he is a great coach. But from one day to the next the players change you, the environment changes. You never know if you are a starter or not.” 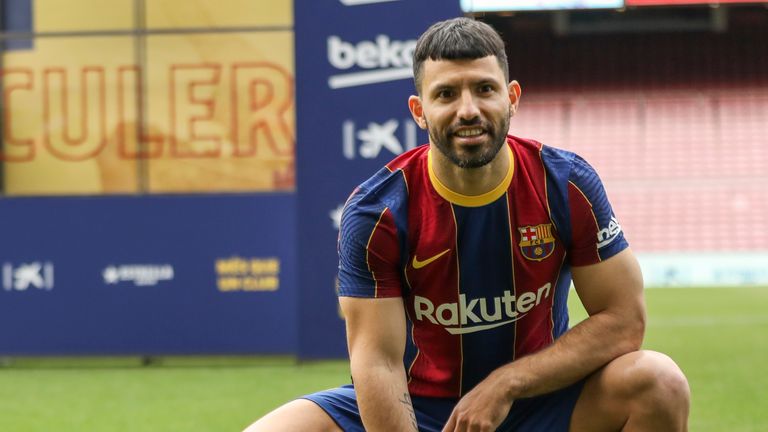 Meanwhile, El Castillo also revealed Arsenal and Chelsea were among the clubs interested in signing City’s all-time leading scorer before he decided upon Barca.

He said: “He is happy right now after signing for Barcelona. I see him happy.

“He didn’t know what was going to happen with his future. There were several clubs interested in signing him. Arsenal were interested in him and Chelsea to the last minute.

“If he didn’t stay in England, it was going to be Italy or Spain.

“He’s been friends with Lionel Messi since they were 15 and they’ve always talked. It looks like Messi is going to stay at Barcelona so they’re going to play together.”