Home » Soccer » Serie A shake-up, desperate Dortmund, a chance to catch Atletico Madrid and what to watch around Europe

Once more it has been a midweek bout of cup action on the domestic scene, but Europe’s biggest and best return to their respective league campaigns as we head into the final third of the season.

In general terms, the ‘run-in’ towards success and silverware can be thought of as beginning when the Champions League and Europa League start up again – which is precisely what happens straight after this weekend.

As such, rotation, fitness and quality of squad players and managers deciding what their primary objective will be for the rest of the season will all start to come into play.

Even so, the minimum aim for many might simply be to ensure they are in the Champions League next season; after a campaign with no fans attending matches and so income falling off sharply, being out of the big money next term is a thought some clubs simply cannot allow.

The pressure really cranks up from here on in and there are some huge matches to focus on around Europe’s top five leagues.

All very simple and straight-forward in Serie A this weekend: two huge matches, top-four places and title possibilities on the line.

Napoli host Juventus on Saturday, with Inter Milan at home to Lazio on Sunday night.

Just five points separate Juve in third and Atalanta in seventh, so the fight for Champions League spots in Italy looks set to go right to the wire with most of the teams in that clutch showing decent form and picking up results against at least one of the other big clubs.

Lazio are the most in-form side in the league, with six straight wins to their name, but their trip to the Giuseppe Meazza Stadium is a serious test of whether they hold title ambitions this term or can just aim for consecutive top-four finishes. They play new Club World Cup champions Bayern Munich in the round of 16, so they may soon be focusing only on league play.

AC Milan still lead the way and have another seemingly routine game this weekend, away to Spezia who, in 16th, are neither overly concerned by relegation worries right now nor in good enough form to unduly trouble Stefano Piolo’s men.

In Spain, there’s a phrase which is as simple as it is exciting to those who hear it: Hay Liga.

The literal translation is a clumsy-sounding ‘there is a league’; what it really means is: ‘we’ve got a title race on our hands, folks.’

It’s most frequently heard when, say, Barcelona have been on a runaway mission and opened up a seven-point lead – but then Real Madrid win El Clasico. At that moment, with the gap closing and the psychological shift affecting both clubs, hay Liga. 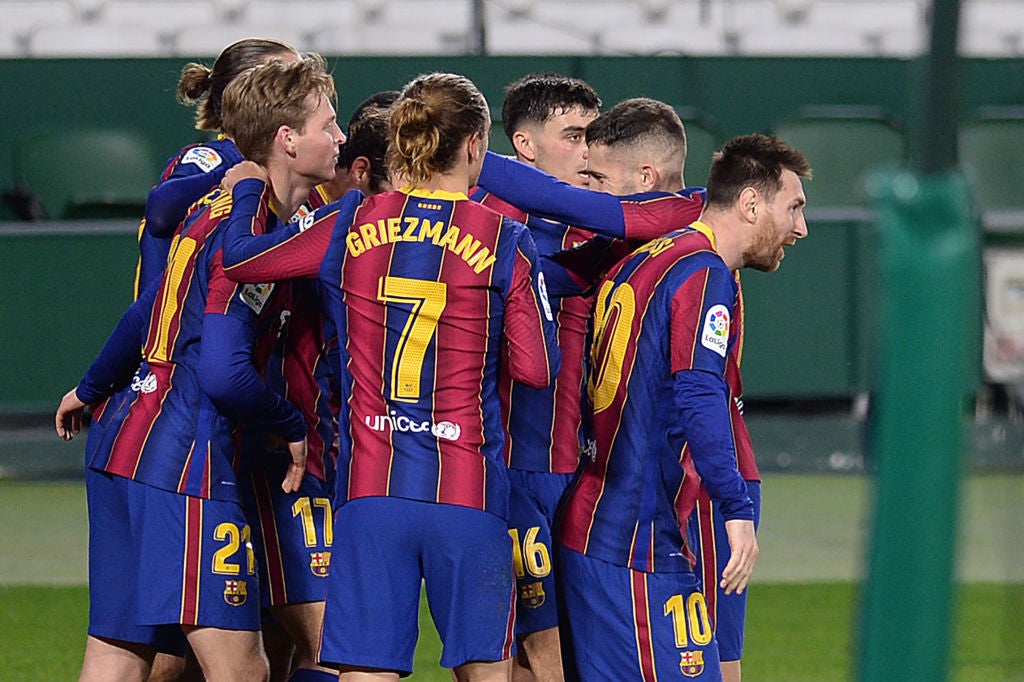 This weekend both of those two are the ones doing the hoping, and the chasing. Right now, with Atletico Madrid five points clear and having two games in hand, it cannot really be said with enthusiasm or belief – but that could very feasibly change.

Diego Simeone’s side are beset by Covid positives, with the likes of Joao Felix, new signing Moussa Dembele and the in-form Thomas Lemar all out as a result. There are others missing, too, including still-suspended Kieran Trippier.

Atleti face a Granada team who haven’t been in the best form, but who are absolutely capable of springing an upset or at the very least taking a point, as they prepare for their own return to the Europa League next week.

This fixture kicks off earliest on the Saturday; if Atletico do drop points then Barcelona – that night against strugglers Alaves – and Real Madrid – Sunday afternoon at home to the ever-inconsistent Valencia – have a real chance to put the pressure on.

Games in hand or not, with an in-form Barca winning seven on the spin in league play and Real Madrid being just two points behind, there would definitely be shouts of hay Liga.

Best of the rest

It’s time for Borussia Dortmund to figure out their priorities. The weekly rumour columns have been full of suggestions that they’ll have to offload their brightest and best, including Gio Reyna, Jude Bellingham, Erling Haaland and Jadon Sancho.

The financial struggles affecting all teams this year will be felt even more in the second half of 2021, you’d expect, given TV revenue rebates are due, sponsorships may be negotiated and, for some, the cushion of Champions League windfalls will be absent.

Dortmund have won just once in the last five in the league, dropping down to sixth in the process, four points off Eintracht Frankfurt who are fourth. BVB must start to win again, starting against Hoffenheim, if they want a shot at being among the elite next term – or face the possibility of a break-up of the talented young squad they’ve built over the past few seasons.

Elsewhere, it’s worth noting in France that the Raymond Domenech experiment is over for Nantes.

The former France national team boss lasted fewer than 50 days in the job as boss, failing to win a single game, and former PSG head coach Antoine Kombouare is in instead. That we know of, he has no preferences of which astrology zodiac signs his squad is made up of, which is a departure from Domenech’s famed methodology.