The new Sheriff in town: Champions League debutants Tiraspol were founded by ex-KGB officers and have 19 nationalities in their squad… now they’re ready to spring a surprise against moneybags Real Madrid!

They come from a land not officially recognised, are bankrolled by a conglomerate that seems to control everything and even have their own Cristiano. Meet the new Sheriff in town.

When the players of Sheriff Tiraspol, champions of Moldova last season and for a good many before that too, step out at the Bernabeu to face Real Madrid on Tuesday night, it will appear to be the ultimate Champions League fairytale.

But the story of this new upstart in Europe’s premier competition is a whole lot stranger – and murkier – than that. 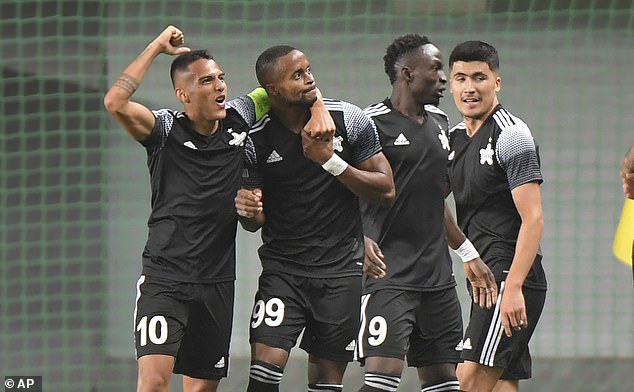 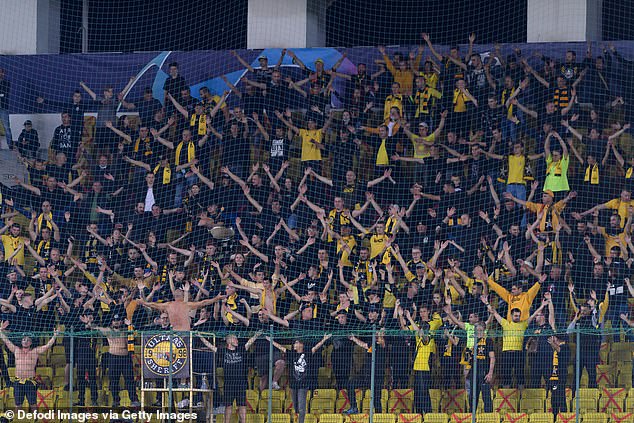 Having negotiated four qualifying rounds to become the first Moldovan club to appear in the Champions League group stages, Sheriff hit the jackpot when they were drawn against Real, Inter Milan and Shakhtar Donetsk.

It goes without saying their visit to the Spanish capital this week is the biggest game in their history by some considerable distance.

But far from being over-awed by being in such esteemed company, Sheriff won their first group match – 2-0 at home to Shakhtar a fortnight ago, thanks to goals from Malian winger Adama Traore and Guinean forward Momo Yansane.

Those delirious fans decked out in black and yellow colours at the Sheriff Stadium who enjoyed the moment can also be giddy with excitement at the prospect of 13-time European champions Real and Italian champions Inter coming to visit them before the end of the year.

It will certainly be unusual territory for both of these giants. While UEFA recognise Sheriff as the champions of Moldova and the club dominate the Moldovan league, those supporters very much consider themselves not to be Moldovan.

That’s because the city of Tiraspol is located in the breakaway state of Transnistria, known officially as the Pridnestrovian Moldavian Republic (PMR). 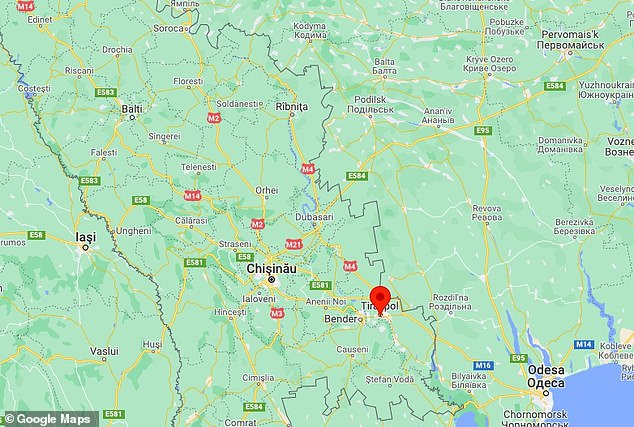 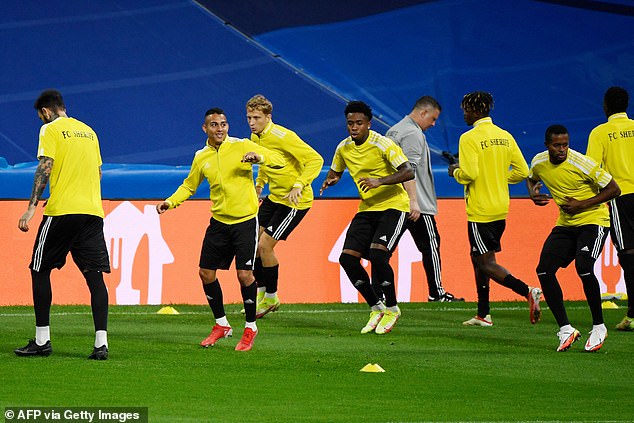 It’s a narrow strip of land between the river Dniester and the border between Moldova and Ukraine. Any map of the region shows it as part of Moldova because it isn’t recognised by the United Nations but it has a very different identity to the rest of Moldova.

For starters, there are more people of Russian descent among its population of 133,000 than Moldovan, its green and red striped flag features the Soviet emblem of the hammer and sickle in one corner and Russia has a considerable military presence there.

Russia’s flag flies alongside that of Transnistria on top of the parliament building in Tiraspol and there is a towering state of Lenin at the entrance. Even the Sheriff fans coordinate songs and chants to old Soviet anthems.

As the Soviet Union collapsed in the early 1990s, there was a brief conflict here because the Pridnestrovian Moldavian Soviet Socialist Republic, as it was then known, wanted to stick with the Russians. 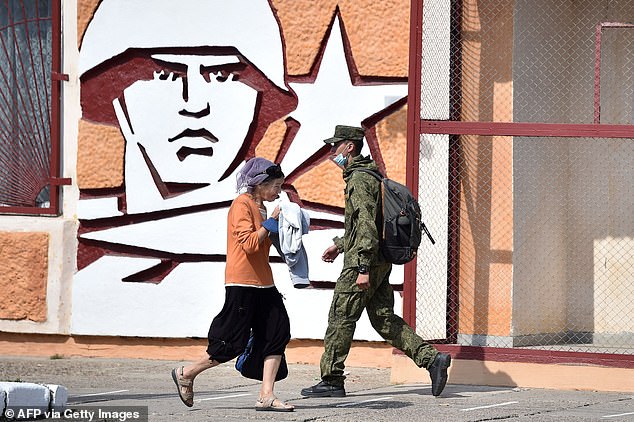 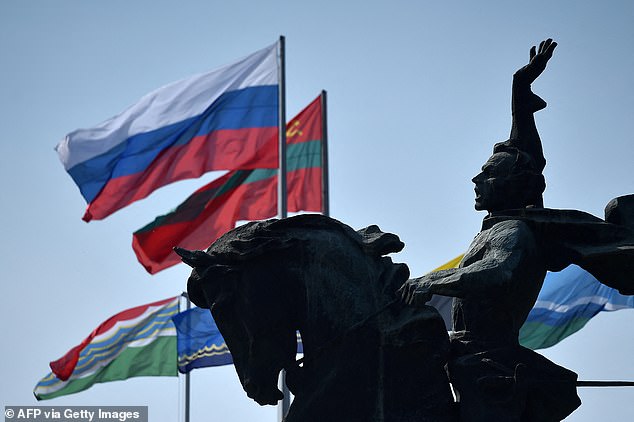 The Russian flag flies next to the Transnistrian one, which still features the Soviet hammer and sickle, on the roof of the parliament building in Tiraspol 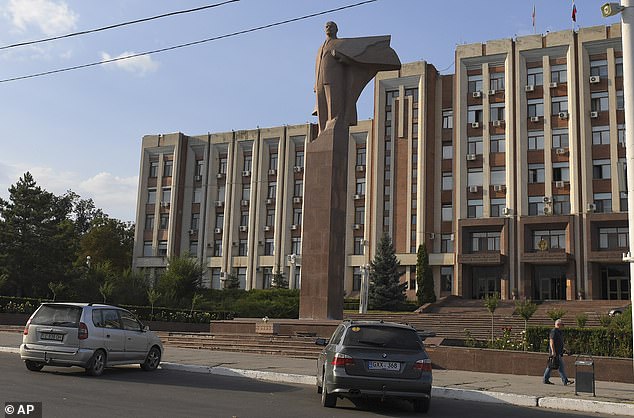 In 2014, after Russia annexed the Crimea, the head of the Transnistrian parliament even asked to formally join Russia but this didn’t come to pass.

But in football terms, Sheriff belong to Moldova and their adventures in the Champions League this season are viewed generally as a good thing for all Moldovan football if you ignore the politics.

Whether their absolute dominance of the league is a good thing is open to debate.

Since promotion into the top division in 1998 – two years after their foundation – they have won the title every year but four, a grip on the trophy stronger even than Bayern Munich’s in Germany.

The last time they failed to win the league was in 2014-15 and a constant influx of UEFA prize money – even if they failed to battle through the qualifiers – reinforced their position as the country’s pre-eminent club. 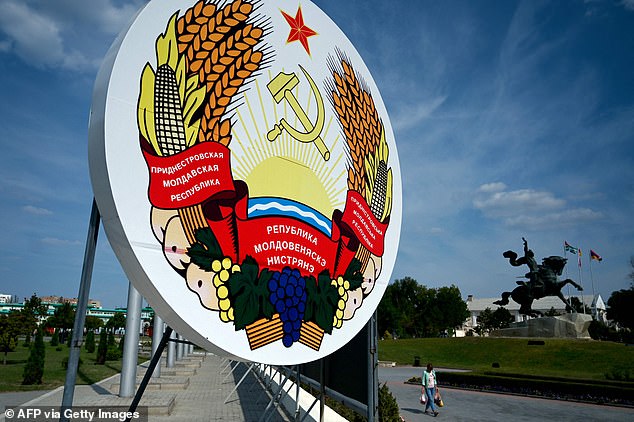 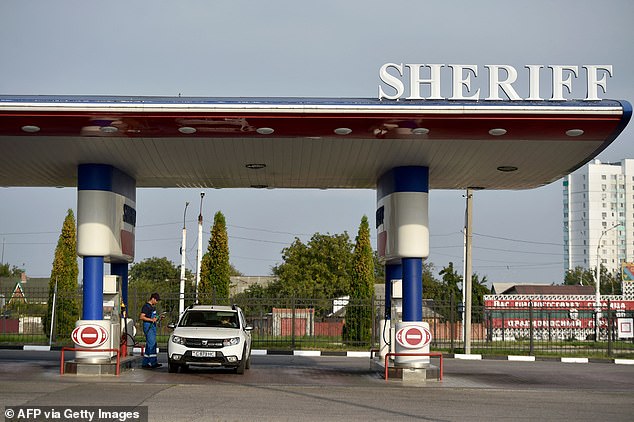 The Sheriff corporation, which owns the football club, is present in many aspects of local life. Pictured is a petrol station in Tiraspol 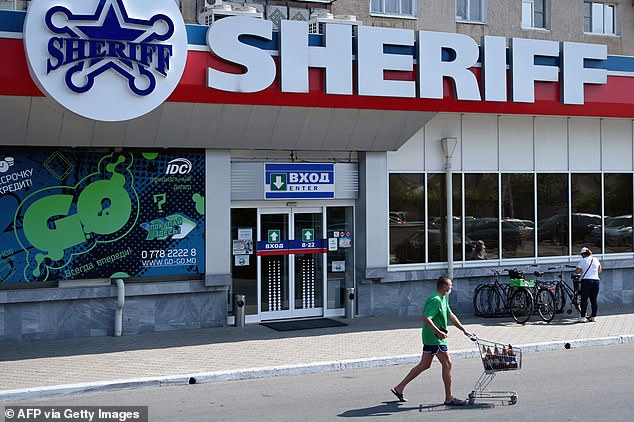 The company also runs a chain of supermarkets as well as breweries, bakeries and much more

By making the group stage this season, Sheriff will earn themselves a minimum of £13.4million in prize money and that’s before broadcast revenue is factored in.

It’s fair to say they will continue to dominate the Moldovan league for many years to come.

They have a massive advantage anyway. They are owned and funded by the Sheriff corporation, set up by Viktor Gushan and Ilya Kazmaly, both believed to be former KGB officers.

With western investment into Transnistria not exactly strong, the Sheriff brand has a monopoly.

It’s slogan, ‘Always with you’, certainly rings true given they own supermarkets, petrol stations, car dealerships, a brewery, bread factories, a construction firm, a mobile phone network and a television channel, among other ventures. The football club is just another arm of the business.

They also have a pretty firm control on the state government through the Obnovlenie (‘Renewal’) party to which the company is linked. 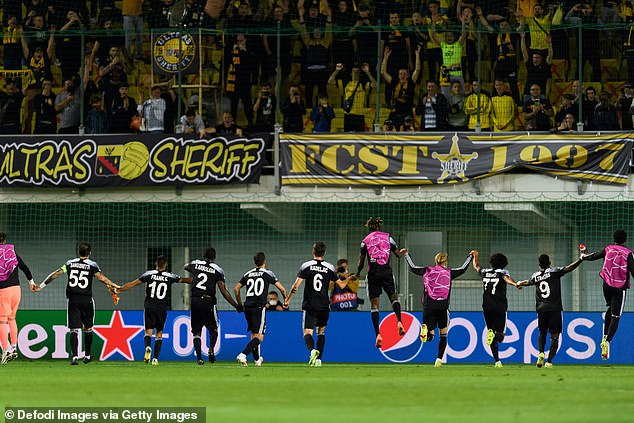 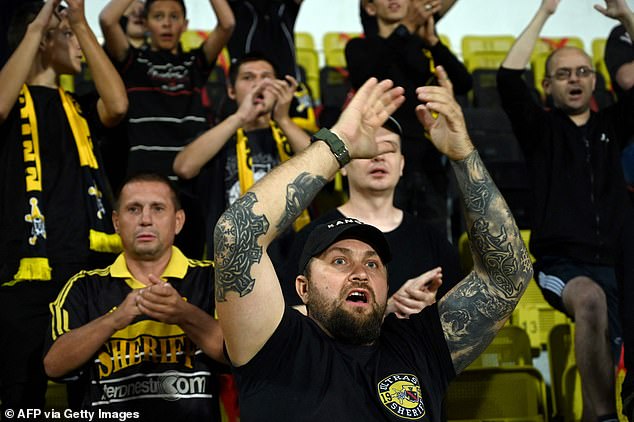 It’s little wonder Sheriff play in a modern stadium that cost $200m to build when other Moldovan clubs have little more than park pitches with no training facilities.

Reports have suggested that Sheriff owes much of its fortune to the porous border between Moldova and Ukraine, which allowed money to be made from the illegal trade in cigarettes, alcohol and food.

But recent years have seen a tightening of border security. With Ukraine spooked by Russia’s incursion into its eastern territory, it didn’t need an open frontier to a pro-Russian territory in the south as well.

One checkpoint was installed at a village through which it was believed 70 per cent of illegal trade between Tiraspol and the Black Sea port of Odessa, allegedly controlled by Sheriff, was flowing. 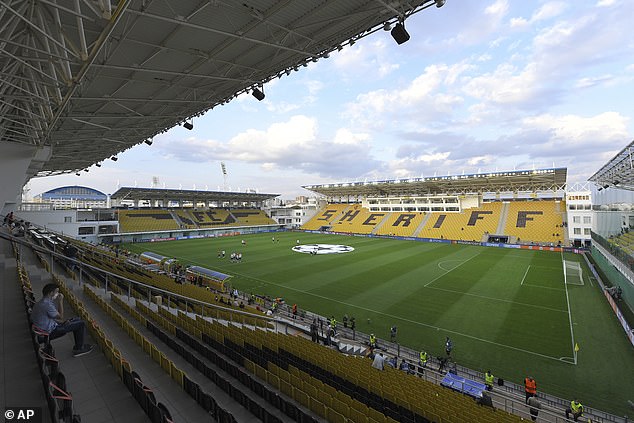 The club plays at the modern 12,000-capacity Sheriff Stadium in the Transnistrian city 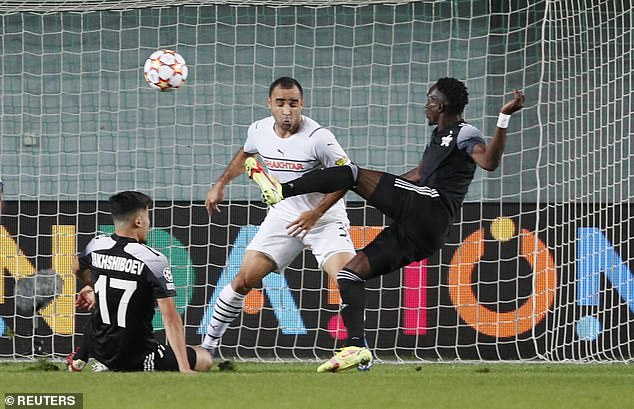 Not that any of this is likely to make a dent on the success of the football team. Not only do Sheriff have the best stadium and a superior training ground to any domestic rival but they have established scouting networks around the world.

This explains a cosmopolitan squad with 19 different nationalities ranging from Serbia and Greece in Europe to Ghana and Niger in Africa and even three Brazilians.

One of these is the defender Cristiano da Silva Leite, who was man of the match against Shakhtar, and playing in the same competition as his more famous namesake at Manchester United.

Forward Traore, a Mali international, signed from French club Metz in February this year and has certainly taken well to Moldovan football with nine goals in 16 games.

Sheriff’s success has been cemented by the Moldovan Football Association removing a cap on the number of foreign players teams can field two years ago. 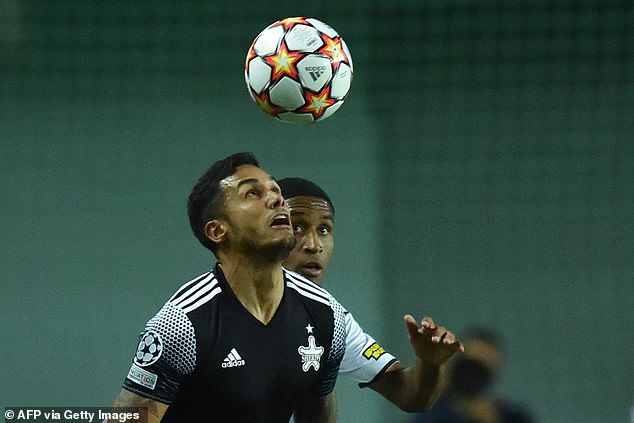 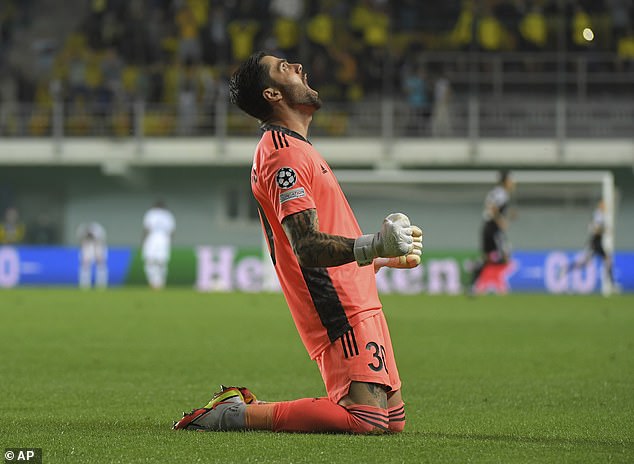 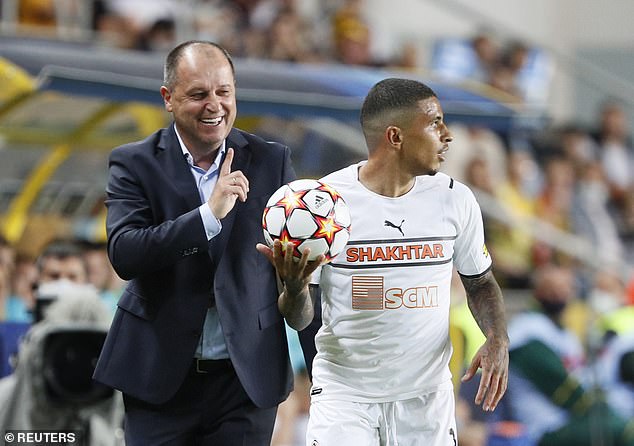 Wealthier than everyone else, Sheriff can offer higher wages to overseas players even if Tiraspol might not be the most obvious or attractive of destinations.

The manager is Ukrainian Yuriy Vernydub, who was manager of Zorya Luhansk in his homeland when they played Jose Mourinho’s Manchester United in the Europa League in 2016-17.

The Moldovan football authorities have done everything they can to give Sheriff a fighting chance in their best-ever Champions League campaign.

Matches have been postponed to allow them extra time to prepare for the qualifiers, which saw them overcome Teuta of Albania, Alashkert of Armenia, Red Star Belgrade of Serbia and Dinamo Zagreb from Croatia.