Optus Sport has fended off intense competition from rival streaming services to retain the prized broadcast rights to the English Premier League for a further six years.

Optus has been the Australian home of the Premier League since 2016 but was at risk of losing the rights to one of several new services that have started up during that time – especially Paramount+, which has ambitious plans for football together with parent company Network Ten after agreeing to tip in $300 million into the A-Leagues, Socceroos and Matildas over the next five years. 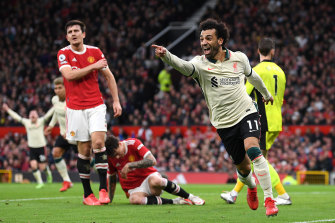 But the telco has managed to not only keep the rights – until 2028 – but has also retained the rights to the FA Women’s Super League, where Matildas superstar Sam Kerr plays her club football for Chelsea, through to 2024.

The value of the deal has not been revealed, but industry sources have previously indicated to the Herald and The Age that the rights were likely to be sold for up to $80 million per year.

Optus made the announcement on Friday morning, also revealing they have now surpassed 1 million subscribers.

“We are thrilled to be able to significantly extend our exclusive partnership with Premier League and the FA Women’s Super League and continue to bring the best football coverage to more than a million of our passionate and loyal Optus Sport customers,” said Optus CEO, Kelly Bayer Rosmarin.

“Optus has proven to be an outstanding home for the Premier League in Australia and has helped to grow the fanbase of the Premier League and its clubs through market-leading content and impressive innovation. We are looking forward to continuing to work with Optus in the years ahead.”

The deal ensures the survival of Optus’ sports streaming business, which is built around the Premier League rights and was facing an uncertain future had those rights gone elsewhere. The telco also broadcast the Euro 2020 tournament earlier this year and has also snatched the domestic broadcast rights to the 2023 Women’s World Cup, to be played in Australia and New Zealand.

It came just hours after the Premier League also announced a six-year deal with NBC Sports in the United States worth a reported US$2.7 billion ($3.7b).

Paramount+, which only launched in August and will broadcast their first A-League Mens match on Friday night, is left needing another major sports or entertainment acquisition to support their plans to become one of Australia’s most popular streaming services.