Australia defender Milos Degenek has been ruled out of the Socceroos’ World Cup qualifiers against Oman and Japan after returning a positive COVID-19 test, the team said on Tuesday.

Bailey Wright replaces the Red Star Belgrade defender in Graham Arnold’s squad for Thursday’s (Friday AEST) Group B clash against Oman in Doha and next week’s Japan game in Saitama. 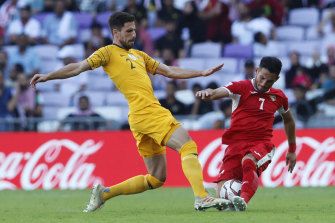 Milos Degenek is out of the Socceroos’ next two World Cup qualifiers.Credit:AP

“Degenek is asymptomatic, however after returning a positive test in his pre-departure screening, he has been ruled out of the upcoming FIFA international window,” the team said in a media release.

Fifteen of Australia’s 25-player squad had already arrived in Doha, with the rest to arrive later today.

Australia are top of Group B after beating China and Vietnam in their opening games of the current phase of Asian qualifying for next year’s World Cup in Qatar.