Solihull Moors 1-2 Grimsby (AET): Jordan Maguire-Drew strikes deep into extra-time as the Mariners come from behind to secure promotion back into Football League

Grimsby Town have returned to the Football League at the first time of asking after a 2-1 extra-time victory over Solihull Moors in the National League play-off final.

Both of the Mariners’ previous play-off victories, against Notts County and Wrexham, came after 90 minutes and Paul Hurst’s side made it three in a row as substitute Jordan Maguire-Drew scored a 111th minute winner.

It means Grimsby, who finished bottom of League Two last season, are the first team to be promoted from the National League after finishing the season in sixth place. 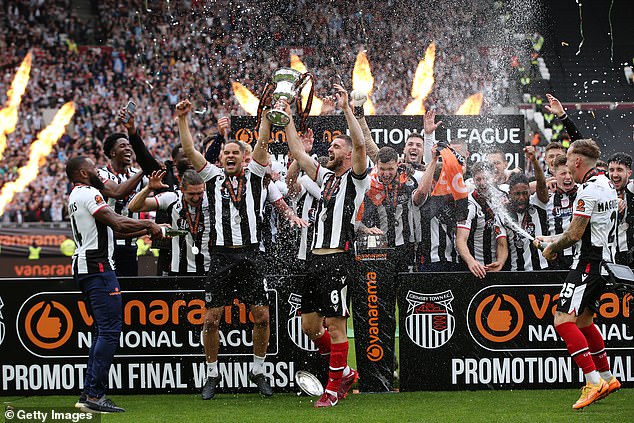 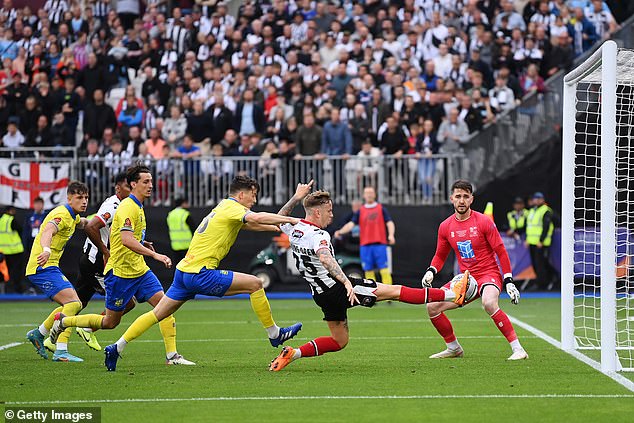 Kyle Hudlin’s header had put Solihull ahead on the stroke of half-time but John McAtee’s equaliser forced an extra 30 minutes of play. And Grimsby once again dug deep to seal a fairy-tale ending for boss Hurst, who has now twice led the Lincolnshire side to promotion.

Solihull had come into this game off the back of six straight victories and finished 10 points above Grimsby in the league table. And it was Neil Ardley’s side who started on the front foot.

Callum Howe had a shot blocked from close range in the opening stages before top-scorer Andy Dallas’ deflected effort was clawed away by Mariners’ goalkeeper Max Crocombe.

Howe was then inches away from opening the scoring but headed just wide at the back-post.

Grimsby could have had a penalty when Kyle Storer caught John McAtee with a late lunge, but referee Martin Woods was unsighted and the Moors’ skipper escaped without punishment.

The Mariners then wasted their best chance to take the lead just before the break. Erico Sousa’s cross picked out an unmarked Harry Clifton at the back-post but the winger got his finish all wrong, side-footing over the bar from just five-yards out.

The teams looked set to go into half-time level but Hudlin had other ideas. Some astute build-up play down the left flank saw Dallas lay the ball back to Joe Sbarra, who crossed to the far post where Hudlin was waiting to nod down into the bottom right corner.

Grimsby needed a response and they almost got it with two chances at the start of the second half. First, Clifton deflected Gavin Holohan’s shot wide then McAtee fired over from the edge of the box. 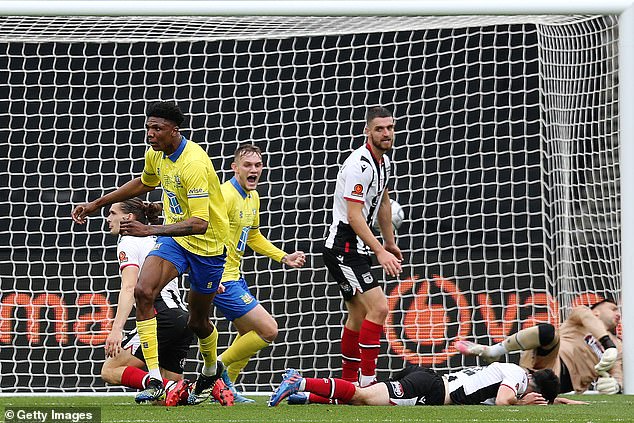 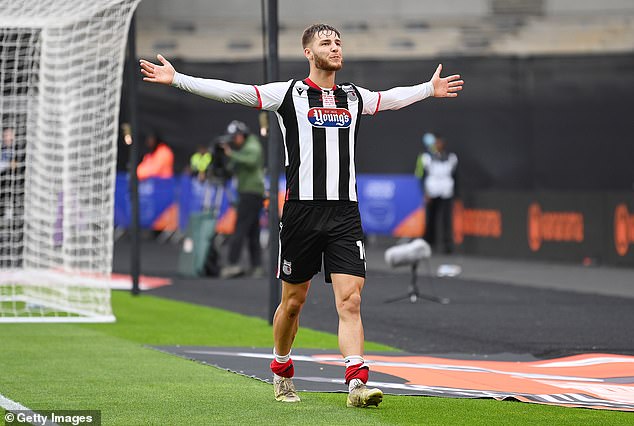 McAtee was by far Grimsby’s best player and in the 69th minute he fired his side level. The forward was picked out in the box by Andy Smith and took one touch before finishing into the bottom left corner.

Both teams had chances to win it before extra-time. Solihull’s Alex Gudger sent a free header over the bar before a stretching McAtee poked Jordan Maguire-Drew’s cross agnoisingly wide.

Chances in extra-time were few and far between but the difference proved to be a long throw from specialist Jordan Cropper. Dallas could only head the ball backwards towards his own goal and Maguire-Drew was there to prod home at the back-post.