18 games in 51 days? No problem, I played every minute!… Spurs legend Steve Perryman recalls hectic schedule of their 1981-82 season as Premier League prepares for return

In the end, it all came down to the FA Cup final replay and a Tottenham team hanging on to salvage something tangible from a season which, at one stage, had promised to be historic.

In 1981-82, a great Spurs side were in the hunt for an extraordinary quadruple but had a handicap that would make a modern footballer blanche.

The heavy winter had seen festive fixtures postponed and, because of their cup exploits at the time, Spurs were affected worse than anyone. They would have to play 18 games in 51 days. 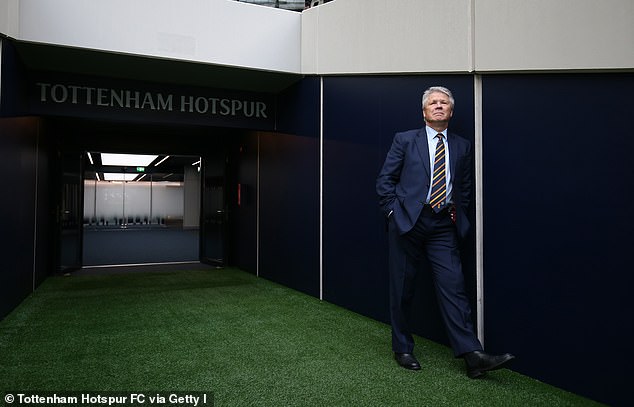 Over Easter they played four games in six days as they chased the League title, FA Cup and UEFA’s Cup-winners’ Cup. Weeks earlier they only lost the League Cup final to Liverpool in extra-time after leading with three minutes to go.

In the context of the current restart from the coronavirus lockdown which is being considered by the Premier League, Spurs’ last nine League games took place in 20 days.

On March 13 — League Cup final day — they were sixth, eight points behind leaders Southampton but with five games in hand. They were two points behind eventual champions Liverpool, who had played three more games. 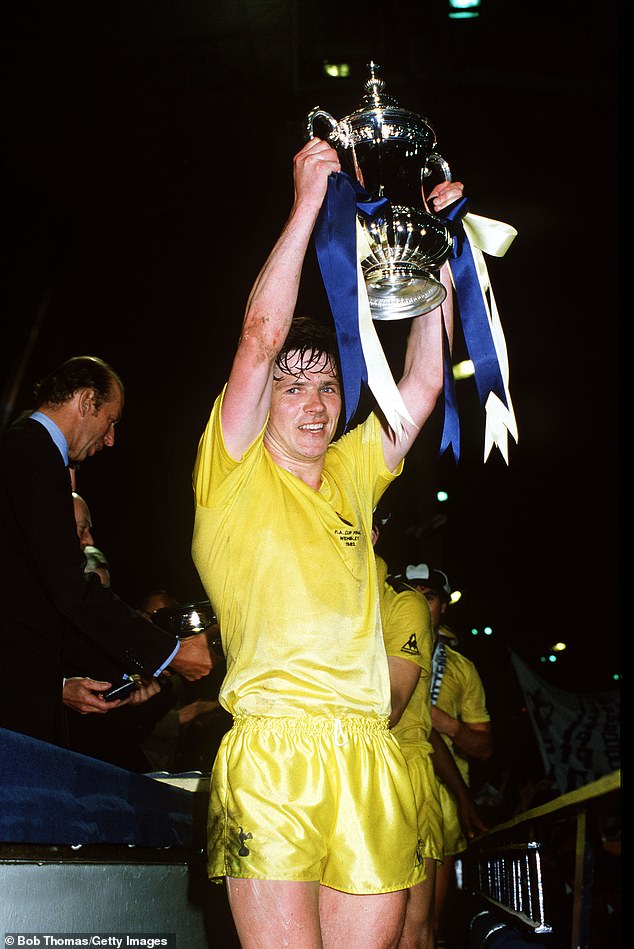 Spurs were progressing steadily through the FA Cup and Cup-winners’ Cup. By the end, all that was left for an exhausted and emotionally battered team was the FA Cup final against Second Division QPR, managed by up-and-coming Terry Venables.

‘We got tired in the League, no doubt,’ recalls captain Steve Perryman. ‘We ran out of legs. That was sort of acceptable but it wouldn’t have been acceptable to get beaten at Wembley by a Second Division team. That would have been more than bad luck. We knew to salvage the season we just had to win the FA Cup.’

Yesterday should have been Cup final day. Spurs, who also lifted the old trophy in 1981 in one of the great finals, a 3-2 replay against Manchester City, were developing one of their greatest teams since the Double-winning side of 1961, but were ultimately famous for knockout triumphs, also winning the UEFA Cup in 1984.

Perryman, who holds the club’s appearance record of 854 games, played behind Glenn Hoddle and Ossie Ardiles, two of the era’s most-talented midfielders. Ray Clemence, who won five League titles with Liverpool, was in goal. Steve Archibald, who went on to play for Barcelona, and Garth Crooks were up front. Former Brighton manager Chris Hughton was the left-back.

There were several tales of what might have been. In that League Cup final, Ronnie Whelan equalised late on and Liverpool took charge in extra time. 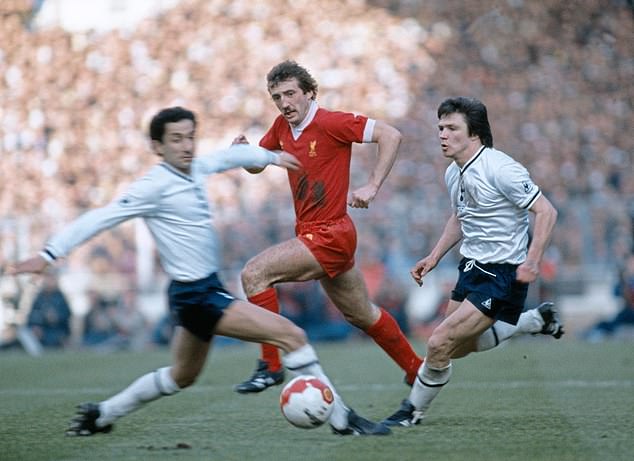 Tottenham’s task was made harder by the onset of the Falklands War between Argentina and the UK, which meant Ardiles was loaned to Paris Saint-Germain. Ricky Villa was left out of the FA Cup final line-up for diplomatic reasons as the conflict escalated.

Amid that extraordinary run of games in 1982, it was the visit to play Barcelona at the Nou Camp in the Cup-Winners’ Cup semi-final second leg that Perryman remembers best. The first leg at White Hart Lane finished 1-1 but it would be fair to say it was not a diplomatic triumph for Barca. ‘Animals!’ screamed one headline. ‘They kicked the life out of us at White Hart Lane,’ he says.

‘I think they probably scouted us and thought we were a physical team: that would have been me, Graham Roberts, Paul Miller. So they decided they had to set their stall out. They started it, then made out like we were the bad boys. It was a case of: ‘So now you’re going to get it in Barcelona’.’

Whatever, going to the Nou Camp was unforgettable. ‘It was special,’ says Perryman. ‘I remember saying to Ian Crook, a younger player: ‘Listen, son. See this stadium, this is why you do extra training. These are the stages you have to play on’. It had an aura about the place.

‘And, by the way, you get to the tunnel and their team files off into a chapel. Then they come out and you think: ‘Ah, that’s lovely’. Then they kick the s*** out of you! They were clearly saying sorry before they did it. Getting absolution…’ The Cup-winners’ Cup would elude Spurs, a 1-0 defeat at the Nou Camp that night ending that dream.

‘The authorities came into the dressing room before the game — we assume both dressing rooms — and said: ‘If what happened in the first leg happens again, no one will go through!’ I think that took the aggression out of us. From kick-off, one of their fellas launched himself at me, a foot off the floor.

‘We weren’t as physical because we took the warning, so we sort of went out with a bit of a whimper.’

Perryman played every minute of that 1981-82 season.

‘Over Easter, we played Barcelona on the Wednesday, Ipswich on Saturday, Arsenal on Monday and Sunderland on Wednesday. Four games in eight days! That was in a period of six games in 15 days.’

Complaints were few and far between from a team managed by Keith Burkinshaw in an era pretty much devoid of sports science. ‘You just had to get through it,’ says Perryman. ‘A lot of football from my era was ‘Just get on with it’.

‘The leaders were from the ‘get on with it’ brigade, who had lived through the second World War: Bill Nicholson, Eddie Baily [Nicholson’s assistant], Harry Catterick [Everton boss 1961-73], Bill Shankly [Liverpool boss 1959-74]. Keith was from that sort of generation. It just had to be done and no one suggested you couldn’t or shouldn’t.

‘You had a lack of information. I hear these days the sports scientist dictates when the [training] session finishes but there seem to be as many injuries as at any time. Liverpool used to win championships with 14, 15 players.

‘No sports science then. I spoke to our former physio, Mike Varney, the other day and asked: ‘How did we get through that?’ He said: ‘Steve, we were running out of players and you were fit. You just weren’t injured, so you had to play’.

‘We didn’t do any training. You came in, you might have talked about the game and you might have had a walk round the pitch, a jog, but you didn’t train. They talk about warm-up and warm-down. There wasn’t even time to warm down. 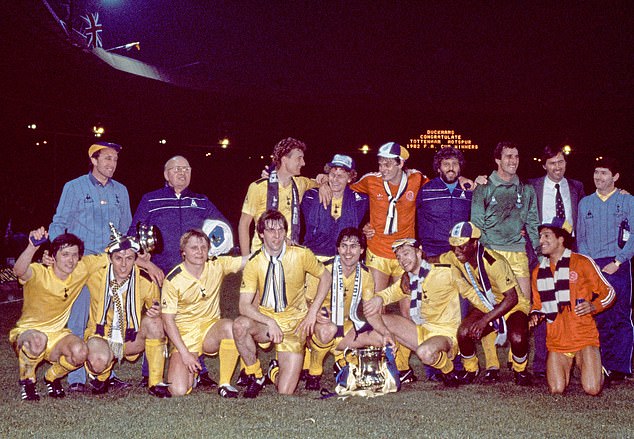 ‘There’s a point at which you don’t need to train, because the more you train the more you get injured. You weren’t encouraged to be tired.

‘You weren’t asked if you were tired. You had to listen to your body. When your body tells you you’re not right, you have to listen to it.’

It wasn’t until Perryman went to join Shimizu S-Pulse in Japan, as an assistant to Ardiles in 1996, where they contended with Arsene Wenger in his final days in the J-League, that they truly discovered modern sports science.

‘We didn’t have scans before then. The physio would just probe the body and assess the injury with his experience. When I went to Japan, in the first week the doctor came in with a scan, like when you have a baby and said: ‘Two weeks’.

‘And he said: ‘The player’s hamstring’.

‘And it wasn’t like me and Ossie played for s*** clubs. That was 1996. Shimizu S-Pulse had a full-time doctor and there were only three full-time doctors in the Premier League at the time.’

Back to 1982 and Spurs did eventually prevail in the FA Cup, winning 1-0 in a replay after a 1-1 draw, but the first game was 0-0 at full time and QPR had the best of the second game after conceding a sixth-minute penalty by Hoddle. ‘They were two poor finals,’ admits Perryman, now 68.

‘We’d run out of legs and we just gathered up to win the Cup. Their keeper Peter Hucker was man of the match in the first match, so we didn’t do too bad, but it was a crap game.’

As for the class of ’82, the bonds forged over their marathon effort proved to be strong. Perryman says: ‘We’re very close. Archie comes across from Spain every now and then. I go with Ossie and Ricky and our wives to Umbria in Italy once a year, which is great. You’re entitled to be close when you win things.

‘We understood why we were a team. Yes, it’s about top players and special players, but it’s also about the grit of Roberts and Miller and Hughton’s smoothness. Ossie was like a battery. Start him off and let him go. He was all action.

‘I don’t think any of it was planned. If Keith said: ‘Ossie: do not go out wide, stay in the middle’, within a minute he’d be taking a throw-in.

‘Clem [Clemence] had the brain, the experience of winning, and Glenn, my God, what talent! Tony Galvin, from non-league, could run all day. And Crooks and Archibald up front were amazing.’