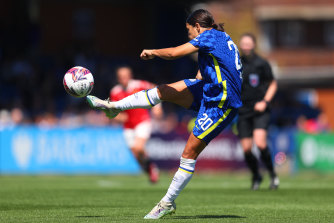 Birmingham City were the only side relegated from the 12-team division, and they will be replaced next season by Liverpool.

Martha Thomas gave Manchester United the lead with a deft header from Katie Zelem’s free kick, and although Erin Cuthbert levelled four minutes later, Chelsea went in 2-1 down at the break after Ella Toone’s deflected strike for the visitors.

The Blues bounced back in the second half, with Kerr levelling again in the first minute with a thunderous left-footed volley. Norwegian winger Guro Reiten put them in front with a deft finish five minutes later.

Kerr put the game beyond reach with a brilliant finish in the 66th minute, chesting the ball down and twisting to volley home after a poor clearance from United goalkeeper Mary Earps.

Arsenal had needed Chelsea to drop points to have any chance of snatching the title, so their win over West Ham ended up being vain.

Manchester City thumped Reading 4-0 to secure the third Champions League spot at the expense of Manchester United, who finished fourth.

Birmingham’s 11-year spell as a top-flight club ended in midweek when a 6-0 thrashing by Manchester City condemned them to the drop, and they signed off with a 1-0 win over Aston Villa.

Tottenham beat Leicester City 1-0 and Everton and Brighton & Hove Albion played out a 1-1 draw to bring the season to a close.