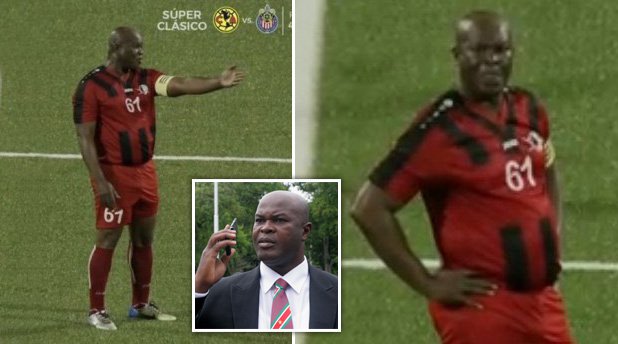 There were astonishing scenes in the CONCACAF League on Tuesday night as Suriname’s 60-year-old vice president picked himself to start for Inter Moengotapoe – though things did not go to plan.

Ronnie Brunswijk, a former rebel soldier turned politician, owns the Surinamese club and elected to lead the team out in their latest match against Olimpia, handing himself the armband.

He took to the pitch at the Ronnie Brunswijkstadion – yes, really – but only lasted 54 minutes before subbing himself off, by which point the team were already 3-0 down.

When he left the field, one of the commentators covering the game remarked: ‘Now we can say we’re 11 vs 11.’

The CONCACAF League is an annual knockout competition comprising of teams from Central America and the Caribbean, with Costa Rican side Alajuelense the current holders of the trophy.

Brunswijk stuck himself up front but had a very quiet game and will have been particularly disappointed to see his side win a penalty just moments after he came off.

The club owner would have been on penalty duties but instead Miguel Darson hit the post with his effort and Olimpia quickly added three more goals as Inter Moengotapoe lost 6-0.

There is a second leg to look forward to next week, though Brunswijk is not expected to travel.

In even more astonishing scenes, after the match Suriname’s vice president entered the Olimpia dressing room and handing out cash to the players of the winning team, also swapping shirts with one of the players.

Brunswijk served as an MP for 15 years and in 2020 became the vice president of Suriname. He had announced his retirement from football several years ago, but made his return in Tuesday’s 6-0 loss.