It’s been one of the most entertaining starts to an A-League season in recent memory – and one of the biggest reasons, according to the coaches of Sydney’s three clubs, has been under our noses the whole time.

World football’s lawmakers increased the number of substitutions allowed in a match from three to five last year, in recognition of the congested schedules many competitions faced after lengthy shutdowns. 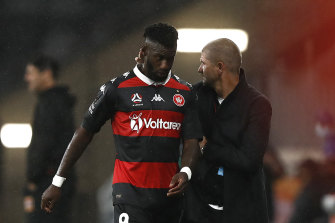 Wanderers coach Carl Robinson can see the merit in keeping the five-sub rule beyond the pandemic.Credit:Getty

A year on from the pandemic, there is a growing view among some that the temporary change should become permanent.

Sydney FC’s Steve Corica, Western Sydney’s Carl Robinson and Macarthur FC’s Ante Milicic, who the Herald canvassed for their views on the topic, all believe the tweak has had a profound effect on the A-League well beyond the intended impact on player availability and injuries – and two see merit in keeping it long term.

Many believe the A-League’s tempo, standard and openness improved significantly when the 2019-20 season resumed last July in a Sydney hub, but few have publicly made the link to the extra subs, which have been available only through that period.

Across the final 27 games of last season and the first 39 of the 2020-21 campaign, an additional 129 players entered the fray as a team’s fourth or fifth sub – adding an energy boost to the second half of matches which helped teams prise open defences.

It also gave coaches more opportunities to blood youngsters while helping them manage the physical loads of more experienced players.

“I love it. I get the arguments against it but I’m definitely for it,” Robinson said. “That’s why you’ve seen so many entertaining second halves and so much attacking, transitional football as well. If it increases energy in the game, why would you not want that?

“I think it’s a change for the positive. With the way of the world and, as we’re moving forward in football, with the product at the forefront, I think the five-subs rule is the right way to stick moving forward.”

Substitutions were introduced to football in 1958 but the three-sub rule, which many traditionalists wish to protect, was made official only in 1995.

From 2016, a fourth sub was permitted in extra time for knockout matches in certain competitions. The International Football Associations Board (IFAB), which controls the laws of the game, is conducting trials for a separate concussion substitute in future. 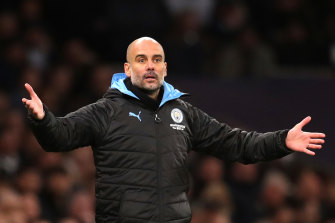 Manchester City manager Pep Guardiola has been campaigning hard for the EPL to adopt the five-sub rule.Credit:Getty Images

Most leagues have adapted to the five-sub change but it was voted down by English Premier League clubs for this season – much to the frustration of Pep Guardiola and Jurgen Klopp, who have campaigned hard for it.

Critics feel increasing the number of substitutions would contribute to growing inequality in football, favouring richer teams with deeper squads over smaller rivals – but last season across Europe, teams near the top of the ladder tended to use fewer subs than those at the bottom.

In the A-League, five of the top-six teams on the ladder – Macarthur, Sydney, Central Coast, Perth and Western Sydney – are also in the top six for the highest average number of substitutions a match.

“Basically, five subs, you’re changing half your team. That keeps the tempo nice and high and you can keep that up for the whole game, and I think that’s why the game hasn’t slowed down now,” Corica said.

“If we’re going to play in summertime, we should keep five subs. It’s definitely not doing any harm – it’s probably helping the game, there’s been a lot of exciting games, quite a high tempo in a lot of games and some great goals. I quite like it.”

Milicic first encountered additional substitutions during his time as an assistant coach with the Socceroos. In senior international friendlies, teams can make up to six changes.

“What I remember closely is that on most occasions, the last 30 minutes are chaos,” he said. “One part of it that is extremely difficult are set pieces, because if you’re changing five players on set pieces and the opponent’s changing five, it’s very difficult to get the roles and responsibilities right for everyone.

“Definitely it plays a part [in making games more watchable]. If you’re losing, you may as well just try something and make two, three subs – you’re losing anyway, so chuck on a few fresh faces and see what happens.”

But unlike Corica and Robinson, Milicic still heavily favours three subs over five.

“This is purely now, for this period,” he said. “It’s very difficult to have a controlled game of football – yes, it’s entertaining for the neutral fan, but at times it becomes I wouldn’t say unrealistic, but it becomes very open and unpredictable.

“I’m still a firm believer of the three subs, but that’s got to be based on the length of the season and the amount of time between each game.”