Home » Soccer » The story of Ali Daei, the Iranian with the goal record Ronaldo wants

The Iran hero Ronaldo MUST beat: Ali Daei set the international goal record on 109 – he was in the World Cup’s ‘most politically charged game’, hit his record-equalling strike twice as a rival was struck by a FIRECRACKER… and downed Chelsea at club level!

It would have been impossible to realise it then but 15 years ago, on June 17, 2006 the paths of two players who have shaped the landscape of international football crossed for the only time.

Cristiano Ronaldo was one of them. That day, he scored his 12th goal for Portugal from the penalty spot in a 2-0 win against Iran as he helped his side seal a place in the last-16 of the World Cup.

The other was Ali Daei, the legendary Iran striker who with 109 goals in 149 matches, holds the record as the highest ever scorer in internationals. It is one of the few that Ronaldo hasn’t broken but with Euro 2020 on the horizon, he heads into the tournament narrowing his sights on that landmark with his tally at 103. 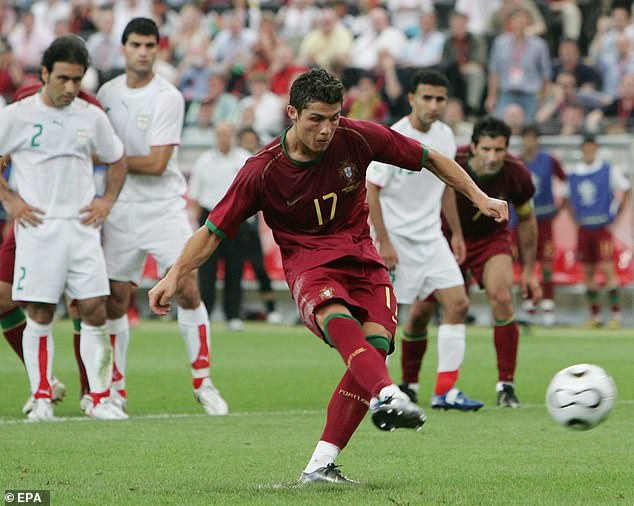 Cristiano Ronaldo scored his 12th goal for Portugal against Iran at the 2006 World Cup, a gae where striker Ali Daei was an unused substitute 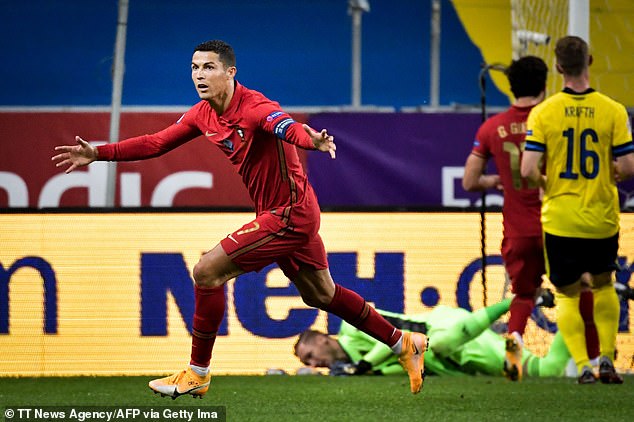 Ronaldo scored his 100th goal for Portugal last November against Sweden and with his current tally of 103, he is just six strikes behind Daei’s long-standing record of 109 goals 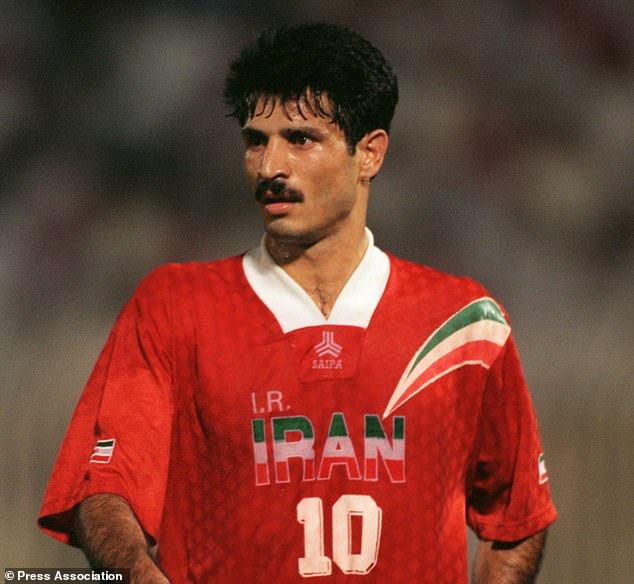 That day, the 36-year-old Daei was an unused substitute. He would play just one more time for Iran, in the ensuing dead rubber group match against Angola which ended 1-1, without him scoring.

Daei’s career is an intriguing tale. His name is at the summit of a long list of players who thrived on the international scene more so than at club level. Pulling on the colours of ‘Team Melli’ brought the best out of the 6ft 4in striker, who was unsurprisingly strong in the air and had a poacher’s instinct in the box.

It wasn’t straightforward for Daei to make it as a footballer. His father didn’t want him to play the game at all until he graduated school and he trained as a metallurgical engineer. But his mother secretly helped him develop his footballing talent, without his dad knowing.

‘I used to leave home without my football uniform and my mother would smuggle it out for me so that I could play,’ Daei told the New York Times in 1998.

He made his Iran debut in 1993 and across Asia, promptly established himself as the most prolific marksman in the game. In fact, just 13 of his goals came outside of the continent and in the way that Ronaldo cashes in when he plays the Faroe Islands or Andorra, Daei did likewise against teams such as Nepal and Sri Lanka.

But Daei’s story as a player is far more remarkable than just banging them in again in against sub-standard opposition. If anything, it encapsulates the pureness of football because while nobody is debating who the more talented is out of Daei or Ronaldo, his story shows how scoring goals can bring greatness. 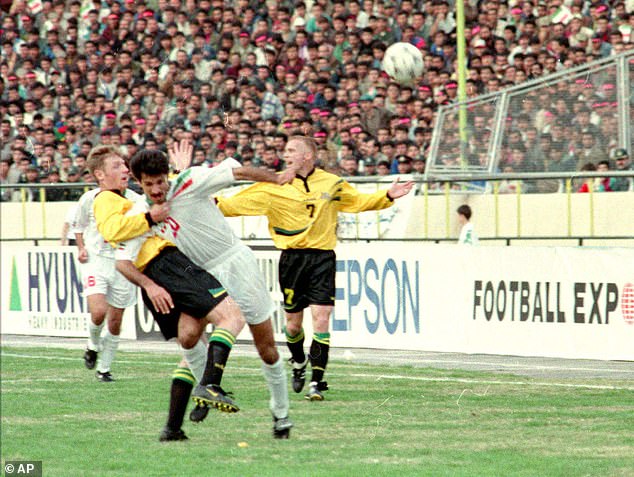 Daei was 6ft 4 and relished an aerial duel – here, he is pictured contesting a header in a 1998 World Cup qualifier against Australia, battling for the ball Craig Moore, who played for Rangers 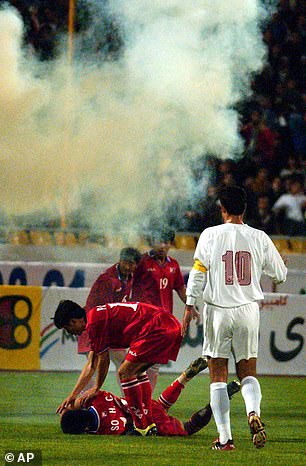 When Daei (pictured, in white) scored what should have been the goal that brought him level with Ferenc Puskas’ record of 84 international goals, a fan threw a flare onto the pitch at Iran’s Azadi stadium and it hit a North Korea player in the face. North Korea refused to play on, the match was abandoned and Daei had to score the goal all over again.

He scored 20 goals in a calendar year for Iran in 1996 and with a four-goal haul against Lagos in 2004, became the first man to bring up three figures in international football.

Goal No 84 was perhaps one of the most significant. It was that strike that took him level on the all-time scoring charts with the legendary Hungarian Ferenc Puskas but remarkably, Daei had to score it twice before it could count.

Iran were facing North Korea at Tehran’s Azadi stadium in November 2003 and in the second half, they got a penalty. Daei stepped up, scored and amid the pandemonium, a fan threw a firecracker onto the pitch that hit a North Korean player in the face.

North Korea walked off and refused to play the game, prompting the referee abandoned the match and award Iran a 3-0 win.

But that meant Daei’s penalty was erased and Puskas stood alone on 84 goals for a little longer. Daei eventually moved level with him for good the following week, again from the penalty spot in a match against Lebanon in Beirut.

Later that November, back in Tehran, Daei scored the only goal of the game against Kuwait to move alone on 85 international goals.

Daei didn’t score in the biggest game he played in for Iran, against the United States in the 1998 World Cup. It was billed ‘the most politically charged match in World Cup history’, and for good reason. 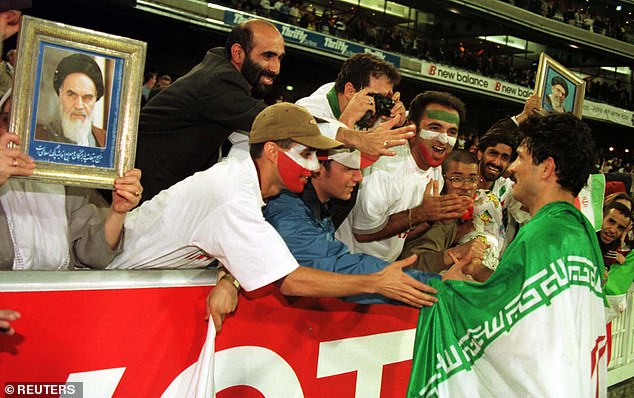 Daei pictured celebrating with Iranian supporters after qualifying for the 1998 World Cup. Around him, fans hold up pictures of the Supreme Leader, Ayatollah Khameini. Iran were drawn against the United States at the tournament, in a game that was billed ‘the most politically charged match in World Cup history’ 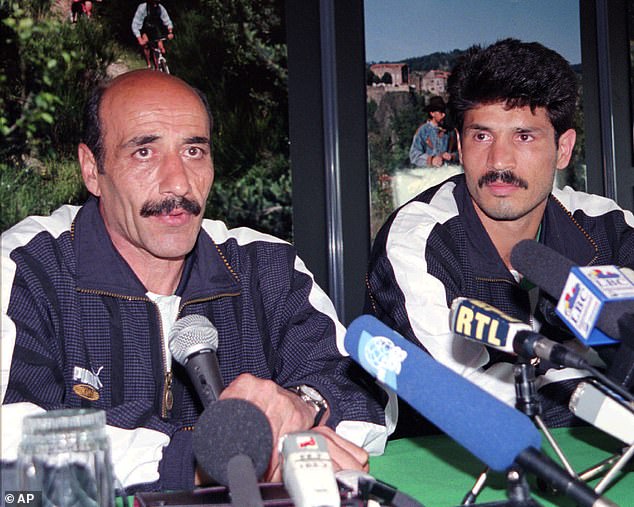 The day before the game in France, Daei (right) and his team, including coach Jalal Talebi (pictured) were given orders from Khameini not to walk towards the American team

Relations between Iran and the US had descended since the 1979 Islamic Revolution which ousted the pro-Western Shah and replaced him with Iran’s Supreme Leader, Ayatollah Khomeini, who denounced the US as ‘the Great Satan’.

The US had severed diplomatic ties with Iran after the US embassy hostage seize in 1979 and the following year supported Saddam Hussein when Iraq inavaded Iran in what became an eight year war.

FIFA rules state that Team B in a fixture approach Team A and in this case, Iran were B. But on the day before the game, Khomeini had forbidden Daei and the team to walk towards the Americans, so FIFA negotiated a compromise where the US side walked to Iran.

Fortunately, the hostilities between the countries didn’t transcend onto the pitch. Daei and his team-mates were each given a bouquet of white roses to walk out onto the pitch with – a symbol of peace in Iranian culture – and they handed them to the Americans before having a team photo together.

Incredibly, Iran then won the game 2-1 with Daei turning provider for the second and decisive goal, scored by Mehdi Mahdavikia. That victory also dumped the States out of the World Cup. 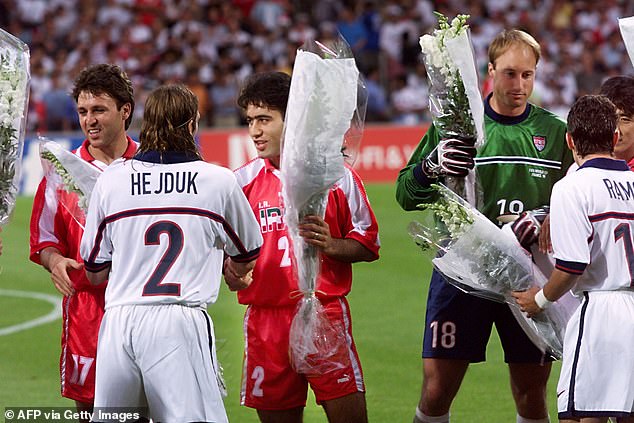 Iran’s players headed out onto to pitch with boquets white roses, a peace offering in Iranian culture, to hand over to their opponents on the United States national side 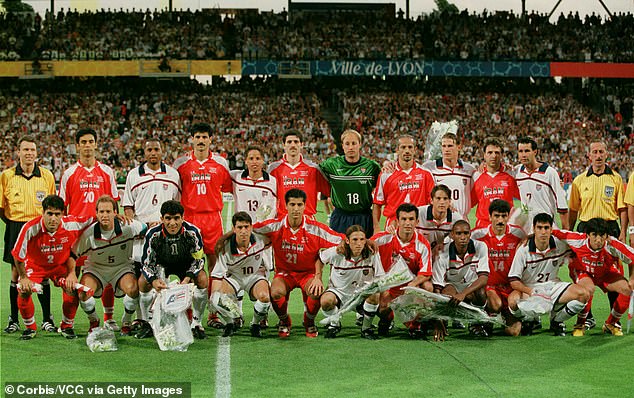 Iran and the US players had a team photo together before the match kicked off – Daei is No 10 and pictured fourth left, in the back row 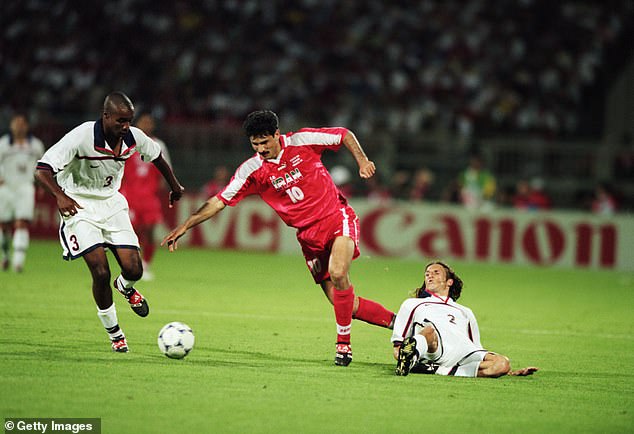 That same summer, Daei was plying his trade in Europe and had joined Bayern Munich from Arminia Bielefeld, but he struggled to transfer his scoring record with Iran to the German Bundesliga.

He scored just six times in 32 games during the 1998-99 season but became the first Asian player to play in the Champions League.

Chelsea fans may remember him when, the following season, he joined Hertha Berlin and scored twice in a Champions League clash against a Blues side containing the likes of Marcel Deasilly, Gianfranco Zola and the now France manager, Didier Deschamps.

He retired in 2007 when, back in Iran, he scored in the final to help his team Sapia win the Persian Gulf Cup.

Since then, he has had a coaching which has delivered varying degrees of success, including a spell at the helm of the Iranian national side. 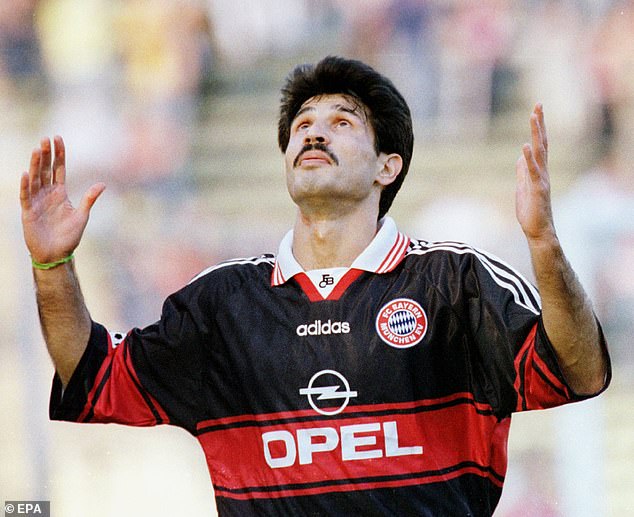 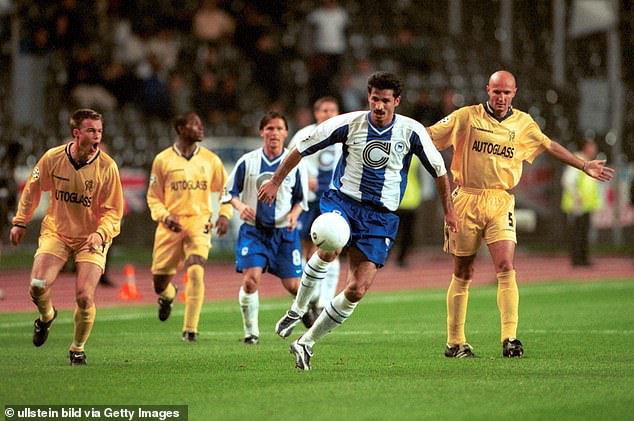 And when he joined Hertha Berlin in 1999, he showed his scoring prowess against Chelsea 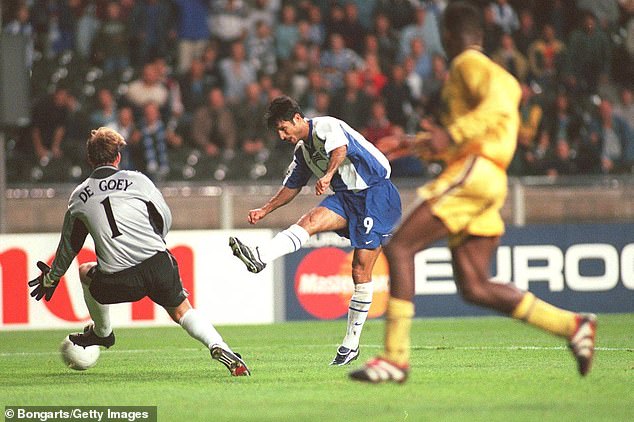 Daei is, however, fully prepared for Ronaldo to break his scoring tally as Portugal head into this summer’s tournament as defending champions.

Speaking to Tuttomercato in Italy back in November, he said: ‘I sincerely hope that Cristiano Ronaldo will reach my goal record for the national team.

‘In no way [would I be hurt], it would be a real honour for me if a player of his class could do it.

‘Cristiano Ronaldo is one of the best players not only of his time, but of all time. He is an absolute phenomenon. I would congratulate him directly. But first he has to get there.’