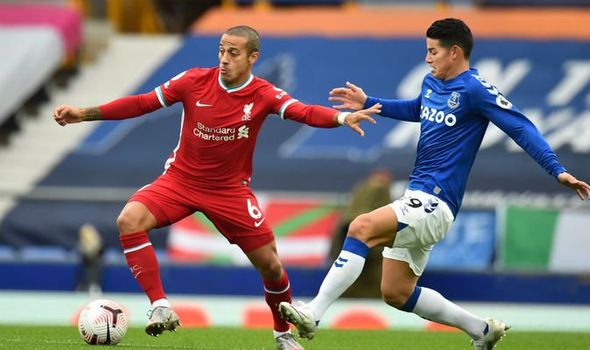 Thiago has only made two appearances for the Merseysiders this campaign but has been impressive in both outings.

The former Barcelona man’s second appearance for the Reds came in Saturday’s Merseyside Derby with Everton, which ended in a 2-2 draw.

As he has done for the majority of his career, Thiago controlled the game from the middle of the park and showcased his unique vision and wide range of passing.

Murphy, like many who follow Liverpool, was blown away by the diminutive midfielder’s performance against the Toffees, which he likened to that of a prime Scholes.

JUST IN: What Liverpool star Van Dijk said to Pickford after injury 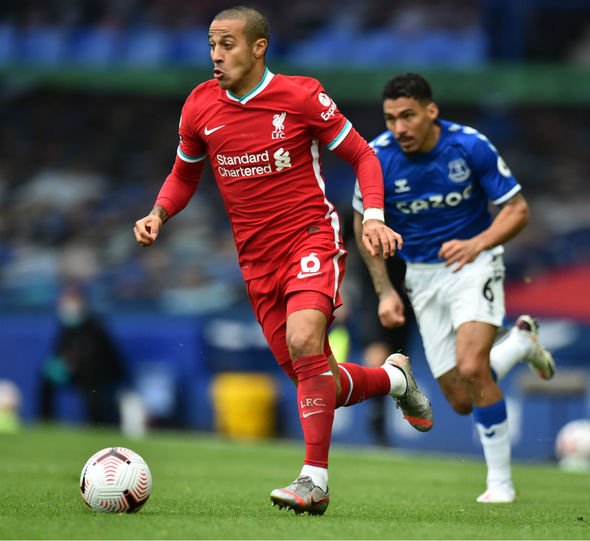 There is a bit of Paul Scholes about him

“Liverpool were the better team,” Murphy wrote in his Mail on Sunday column. “Jurgen Klopp brought in Thiago Alcantara, Sadio Mane and Henderson from the side humiliated 7-2 at Aston Villa and they all made a massive difference.

“Attacking-wise, they were like last season, with Mane and Mo Salah electric in their finishing.

“Had Van Dijk not been injured, I think Liverpool would have won because both Everton’s goals came from headers the Dutchman could have stopped – while taking nothing away from the quality of Michael Keane and Dominic Calvert-Lewin’s finishes.

“As a midfielder, I loved Thiago’s performance. He is so productive with his passes. There is a bit of Paul Scholes about him.

“If you stand off him, he’ll kill you with through balls. If you try to get tight and close him down, he will effortlessly pop it around you.”

Thiago’s second Liverpool appearance ended on a sour note as he sustained an injury from a horrific knee-high challenge from Richarlison, which was the Brazilian was given his marching orders for.

Reds boss Jurgen Klopp was furious with the tackle, telling BT Sport: “Difficult, difficult in the moment, because you go in the dressing and the red card for Richarlison is not only a red card for Everton it’s a massive foul on Thiago as well.

“A massive foul, and he lies there now and we don’t know what he has. So it looks not good, to be honest. ‘So it’s difficult to only judge the game. 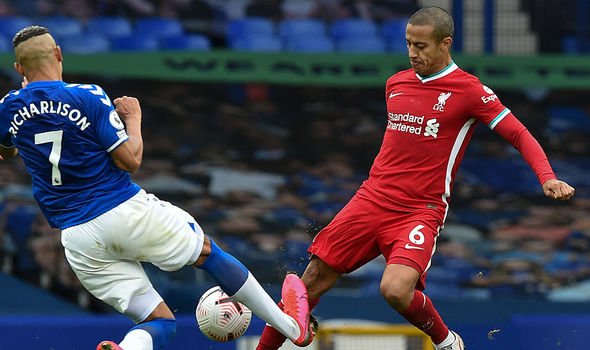 “The game was brilliant but it’s over, we got one point, should we have had three? Maybe yes, but we cannot change that any more. But that’s the situation. I can’t change it.”

The German added: “I leave the pitch and Thiago tells me that in the red card situation with Richarlison he thinks he got injured.

“We will see if it’s true or not. When a player feels like this we’ll immediately have a look.”

Liverpool will be back in action on Wednesday night, travelling to Amsterdam to take on Dutch champions Ajax in their opening Champions League group match.