Home » Soccer » Thomas Frank: Brentford manager insists his side are not favourites against Swansea City in play-off final

Thomas Frank has played down Brentford’s “favourites” tag ahead of their play-off final showdown with Swansea City and thinks it is an “unbelievable” achievement for the club to have reached the showpiece two years in a row.

The West London club dispatched Bournemouth 3-2 on aggregate in the semi-final thanks to an enthralling second-leg comeback as goals from Ivan Toney, Vitaly Janelt and Marcus Forss saw the Bees book their place at Wembley.

Steve Cooper’s Swansea overcame Barnsley in their semi-final and they are aiming to return to the top-flight after three seasons away.

With Brentford also looking to avenge last year’s 2-1 final defeat to local rivals Fulham, Frank is predicting a tense and nervous encounter in front of around 12,000 fans on Saturday.

The Dane told Sky Sports News: “It is one of those like with other experiences in life, where you went to your first exam or another big occasion, you can’t really nail what it is you could potentially do better or be more calm because you experienced it before.

“So I think it could be a little bit intuitive – we’ve been there before, we tried it, we know what it’s all about so hopefully that can help us.

“But I need to say there is another team out there who will do everything they can to try to stop us and they will believe they can.

“I think it’s a game where of course there will be a lot of tension. I don’t think we should run away from that and there’ll be nerves from both teams, that’s completely natural.

“I think we will go into it with a good belief, calm, and actually it was tough last year of course it was. But we found out the next day that the sun rises again and life goes on. So I think that’s a part of it but of course, we will give it a massive go.

“Honestly, I don’t think there are any favourites in the game.

“We played Swansea twice this season, two 1-1 draws, two tight games. Swansea have done fantastically and Steve Cooper is one of the most promising managers in this country.

“They have improved this year and it will be down to the finest margins which will decide this game.”

Frank did a lap of honour prior to last weekend’s win over Bournemouth to greet supporters, with 4,000 having attended the Brentford Community Stadium for the game to cheer their team on to victory.

The 47-year-old thinks their fans can have a further role to play this Saturday and believes reaching the Premier League for the first time in the club’s history would be an achievement testament to the progress of the whole club, rather than his management or the exploits of key players such as this season’s Championship top scorer Ivan Toney.

He added: “I don’t think too much about that I can be the one, I think it’s more that we can create something remarkable.

“It’s not about me, it’s not about Ivan Toney, it’s not about David Raya, it’s about the team, the staff, and the club and I think one big thing is our togetherness that you can sense and feel when you walk into our training ground and I really hope that that value can get us over the line. 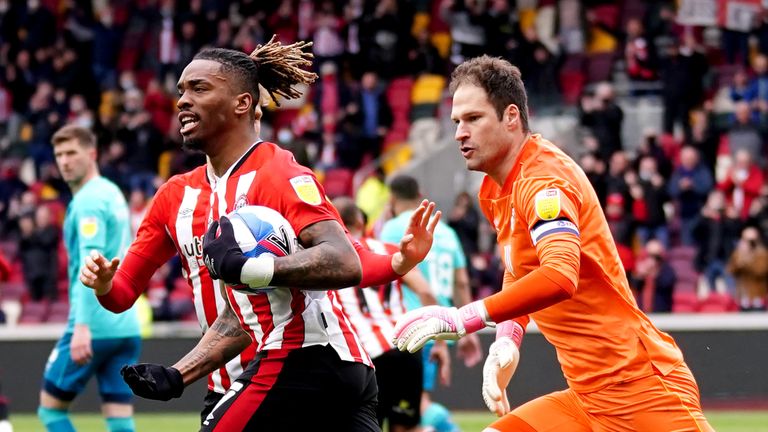 “This game was special in the semi-final second leg against Bournemouth. We needed to hit a top performance for everything, on the pitch, off the pitch, the togetherness with the fans because we knew that could potentially be a factor and some percentages that we could maybe add to our performance, and the fans were amazing.

“We need to go a little bit out of the box so it will lose its effect if I did a lap every single game and I would be too tired!

“Of course we all know it would be a massive success [to win in the final] – if we lose, they will talk about a missed opportunity and we are aware of that.

“But sometimes you need to step aside and look at what we have achieved together. So many people from the administration side to the people involved in the stadium, the players, the staff, the coaches, everyone that made us get this close last year.

“We sold two of our best players, broke the transfer record of the Championship twice, and we still achieved reaching another play-off final. That’s just unbelievable.”

Frank also gave a word on his former forward Ollie Watkins who Brentford sold to Aston Villa last summer and has made Gareth Southgate’s provisional 33-man squad for the European Championships after an impressive first campaign in the Premier League.

Watkins, who was playing League Two football with Exeter City in 2017, has been in scintillating form for Dean Smith’s Villa scoring 14 goals in 37 top-flight appearances, and the striker made his England debut in the 5-0 win against San Marino back in March.

Frank said: “I’m always pleased when some of the former players who I’ve worked with take another step and it’s very nice because you get very close to these players and relationships build so you really hope they do well. It’s very nice to see Ollie [Watkins] in the squad and I hope that he will be in the squad of 26.”