Manchester United might have reason to be concerned in their chase to sign Frenkie de Jong this summer. Chelsea have also registered an interest in the Barcelona star this transfer window.

United have been trying to thrash out a deal for De Jong but Barcelona have been unwilling to comply so far, though fees are at a critical stage.

Nevertheless, whether the player actually wants to move to Old Trafford is yet to be decided after it emerged that he is not willing to take a pay cut. And there is further bad news after reports broke that Chelsea are looking to snap up the midfielder as well.

The Blues have yet to make a signing this summer – the only top-six team not to – but new owner Todd Boehly is keen to make a splash. While the likes of Raheem Sterling, Matthijs de Ligt and Raphinha have been linked, De Jong is also on his wish list.

The Red Devils have made signing the 24-year-old their main ambition this summer to reunite him with Erik ten Hag, who helped develop him at Ajax. But the news that Chelsea might also vie for his signature will come as a big blow to Old Trafford chiefs.

Principally, Thomas Tuchel can offer something United cannot – Champions League football. That golden carrot ultimately puts Chelsea at the forefront for De Jong – who does not want to drop into the Europa League.

Having won the competition in 2021, that also makes them more attractive of a location than United at this moment in time – who can only dream of entering the competition, let alone lifting the trophy. Finishing sixth last season has given the Red Devils a whole host of problems elsewhere, including their ongoing Cristiano Ronaldo situation. 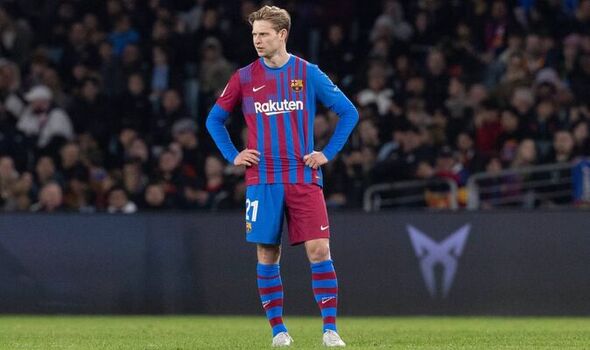 Another reason why United might be sweating over Chelsea’s registered interest in De Jong is the fact that they have something – or rather someone – that Barcelona want. Marcos Alonso has already reportedly agreed terms with the Blaugrana and is keen to move back to Spain.

A fee is yet to be settled with the Blues, though, who might use this as an opportunity to drive the price down for De Jong. Boehly has already utilised player-plus-cash deals in a proposition to Juventus for De Ligt that included one of either Timo Werner or Christian Pulisic.

United have no such player on their books that could be used as a makeweight for De Jong while Chelsea could even offer Cesar Azpilicueta as well. The Spaniard is also keen on signing for Barcelona and has reached personal terms with them as well.

Finally, Boehly’s meeting with the Barca board on Thursday night might have been met in the United offices with some unease amid several transfer sagas revolving around the two clubs. The topic of transfers propped up yet it is not known if any agreement was made, though the improving relations between club chiefs will only strengthen any negotiations in the future.

At Old Trafford, where Richard Arnold and John Murtough are grappling with a fluctuating transfer window, this cannot be good news while their ongoing summer efforts might have been all for nothing. In a year where United have to get it right, this has been an unfortunate start.