Timo Werner got a close-up look at his new Chelsea team-mates as the German striker watched the Blues take on Wolves at Stamford Bridge. The summer signing was spotted in the stands as he gets used to his west London surroundings after moving from RB Leipzig.

Chelsea swooped quickly to trigger Werner’s £53million release clause once it became clear the 24-year-old would not be joining Liverpool this summer.

And Werner has jetted in to London this weekend ahead of joining up with Frank Lampard’s squad in the coming weeks.

The German international has opted not to play in the rest of RB Leipzig’s Champions League campaign, instead pushing through his move to Chelsea as soon as possible.

And Werner is obviously keen to study up his new team-mates ahead of getting on the training pitches during pre-season. 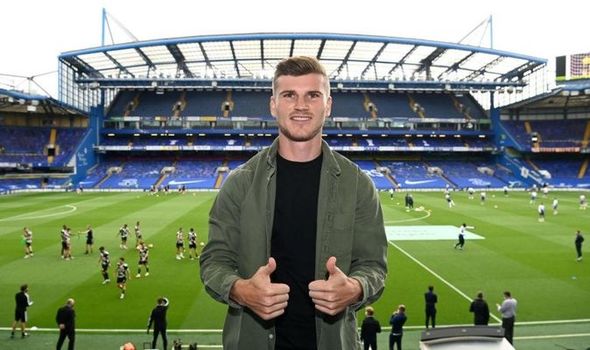 The frontman technically became a Chelsea player at the start of the month but is not eligible to feature until next season.

That means he is also likely to be in the stands when Chelsea face Arsenal in the FA Cup final at Wembley next weekend.

Werner enjoyed a prolific season in Germany, scoring 34 goals in 45 appearances across all competitions.

The striker signed off with a double in his final run-out for Leipzig, bagging both goals in a 2-1 win over Augsburg.

The brace took Werner’s overall tally up to 94 for Leipzig, making him the club’s record goalscorer ahead of Daniel Frahn.

Chelsea have also signed Hakim Ziyech ahead of the new season, having agreed a £33.4m deal with Ajax back in February.

Both new signings will hope to be playing in the Champions League next season, with the Blues requiring just a point to seal their spot at the top table of European football.

A top-four finish will help Chelsea attract a number of other new signings this summer as Frank Lampard continues to overhaul his squad.

Negotiations with Leverkusen over a transfer fee are set to take place next week, with the Blues hoping to sign the 21-year-old forward for around £72m.

Meanwhile, a new left-back is high on the list of priorities with both Emerson Palmieri and Marcos Alonso considered surplus to requirements.

Ben Chilwell is top of the wishlist but Leicester could demand as much as £80m for Chilwell – the same fee Manchester United paid for Harry Maguire last summer – so Alex Telles, Nicolas Tagliafico and Robin Gosens are all more affordable options while Declan Rice has been identified as a long-term solution to Chelsea’s problems at centre-back.

Related posts:
Basketball News:
Merson advises Lampard to switch formation to benefit two Chelsea players
Man Utd slammed for not mirroring Liverpool in market despite Sancho excitement
Paulo Costa wife: Is the UFC 253 star married?
MLB News:
Yankees’ Aaron Boone unloads more F-bombs after an ejection
NCAA issues COVID-19 guidelines for college basketball season
Michael F. Florio's Week 3 fantasy football matchups
Recent Posts
This website uses cookies to improve your user experience and to provide you with advertisements that are relevant to your interests. By continuing to browse the site you are agreeing to our use of cookies.Ok