Tottenham players will have realised by now that Antonio Conte’s favourite word is ‘suffer’. If they don’t, then they are unlikely to last very long under the Italian.

But you can bet your bottom dollar they’ll be happy to continue suffering if this is the outcome.

Nothing quite beats the feeling of winning a London derby, particularly one as hotly contested as this. 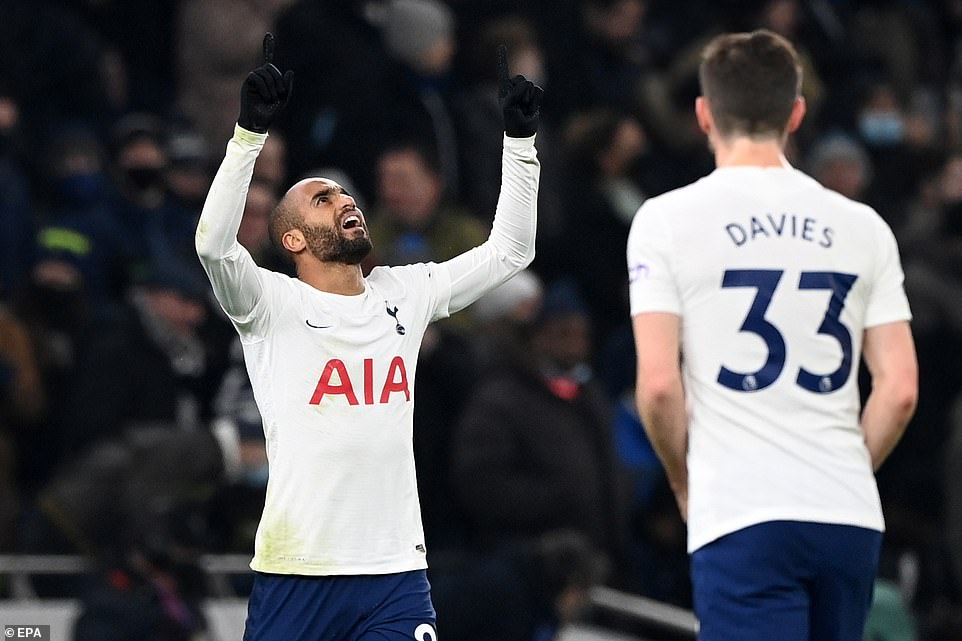 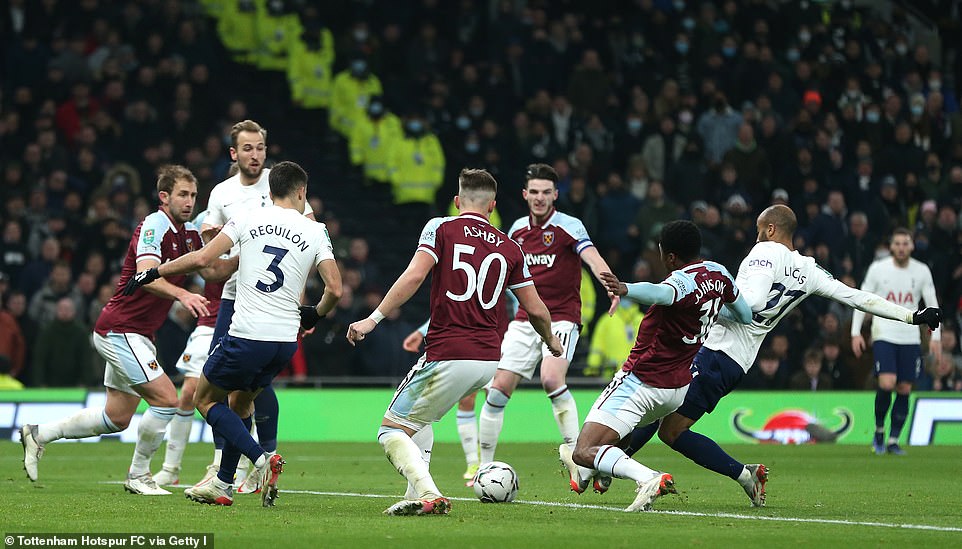 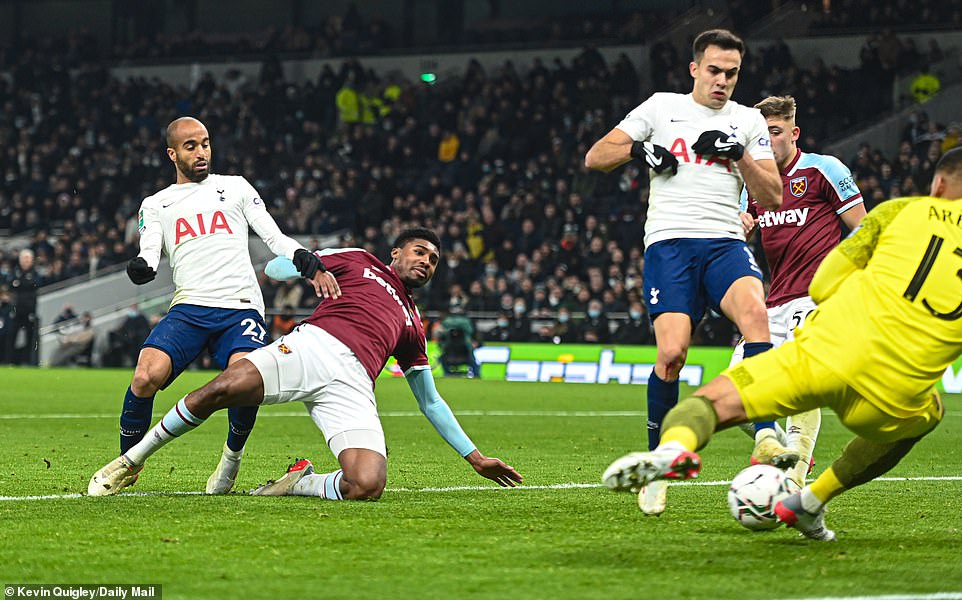 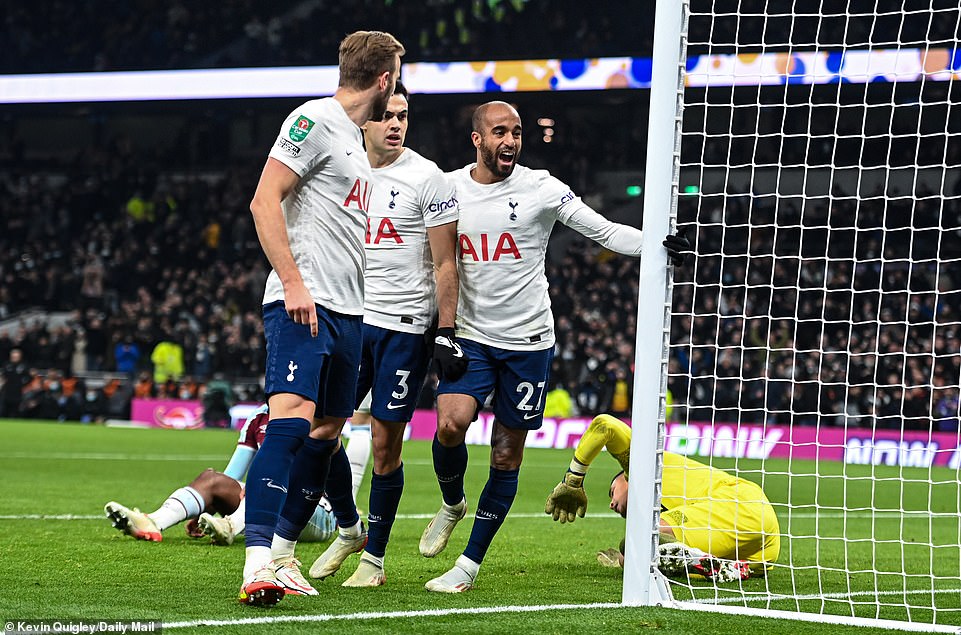 But there they were at full-time, absolutely knackered but with arms aloft – and a step closer to winning Spurs’ first trophy since 2008.

The Conte revolution is gathering pace, but boy is the Italian pushing his players to the limit.

Spurs were running an average of 100km per game under Nuno Espirito Santo – the worst in the Premier League.

Since Conte’s arrival, Tottenham have averaged 115km per match – the best in the top-flight. Once again here against West Ham, they had to suffer the hard yards. Pain.

It will all be worth it this morning, though, as they reached the Carabao Cup semi-finals.

This was a breathless encounter at times – particularly during a frantic opening 45 minutes.

Blood, guts and thunder – a capital cup-tie to capture the imagination.

Spurs were probably worth their 2-1 advantage at the break, but that hardly told the full and frank story of a scintillating first-half.

Not that Conte appeared to be enjoying it as he gestured frantically to his players to calm down throughout the opening exchanges.

But for most of us, it was like Christmas had come early. Brilliant entertainment.

Harry Kane nearly got the ball rolling in the 11th minute but saw his angled effort after being released by Lucas Moura steered clear by Alphonse Areola before the goalkeeper’s opposite number Hugo Lloris was forced into battering away three threatening inswinging West Ham corners.

Tottenham opened the scoring in the 29th minute as Pierre-Emile Hojbjerg and Steven Bergwijn combined for the latter to score his first of the season.

Why Hojbjerg was allowed to run unattended into West Ham’s box having originally played the ball into Bergwijn’s feet would have left David Moyes shaking his head. 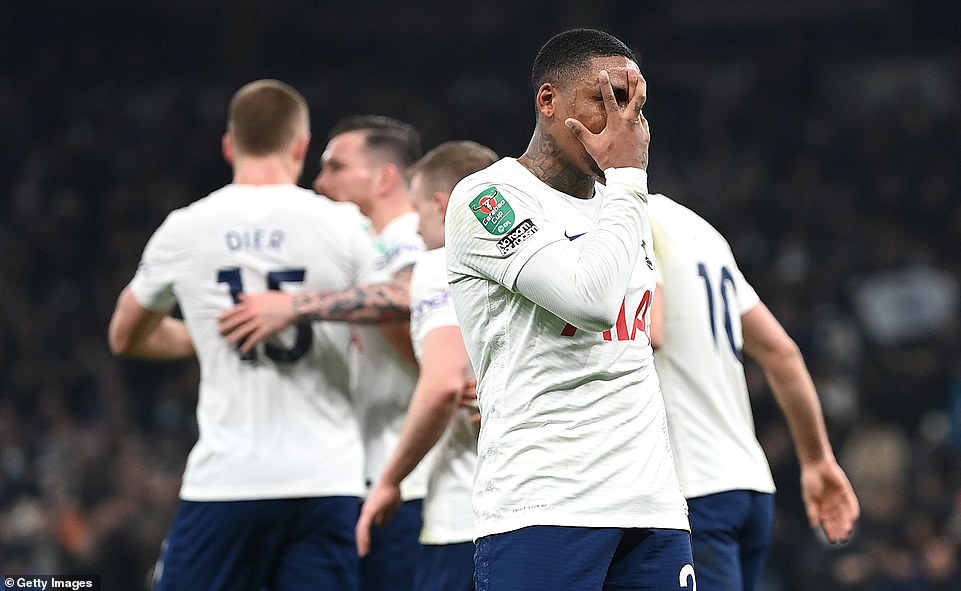 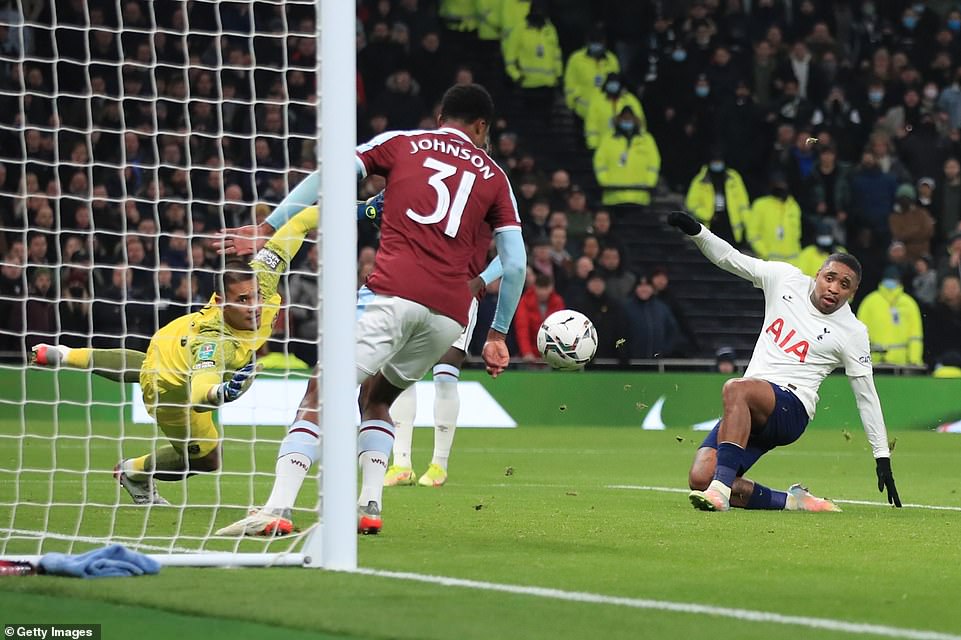 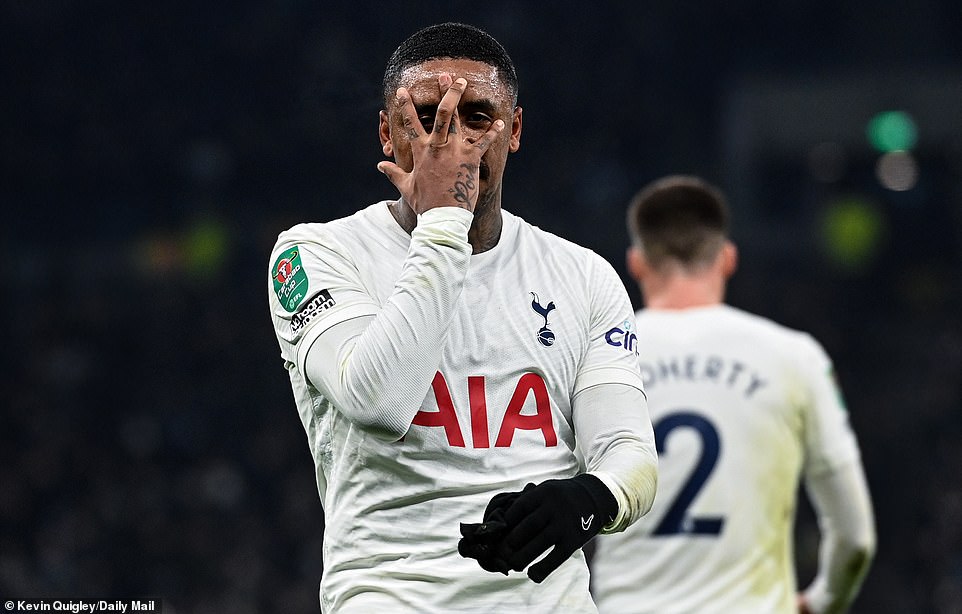 Not that the Dane or his Dutch colleague gave two hoots; Spurs were ahead and that’s all that mattered to them.

You’d have thought that would have been the signal for things to settle somewhat. Thankfully not.

West Ham responded with gusto; just how Moyes would have liked it. A minute after Bergwijn’s goal, Lloris was tipping Tomas Soucek’s goalbound header over the bar.

The Spurs keeper prevented another Soucek header, this time a looping one, from Nikola Vlasic’s cross moments later before Craig Dawson nodded Jarrod Bowen’s resultant corner over the bar when he really should have levelled.

The pain was etched all over Moyes face; he knew his team could ill afford to waste chances as good as these.

That pain quickly changed to ecstasy, however. Vlasic thought he’d try his luck from distance in the 32nd minute after Eric Dier’s attempted pass was easily read by Soucek.

The effort was wayward, but thankfully for the Hammers it arrowed straight to Bowen, who showed impressive composure in the box before slotting cooly beyond Lloris.

Dier, who Conte reckons can become the best player of his type in the world, wanted the ground to swallow him up. Best on the planet? Not on this evidence.

But credit to his Spurs team-mates for saving the central defender’s bacon as Conte’s men regained their advantage just two minutes later. 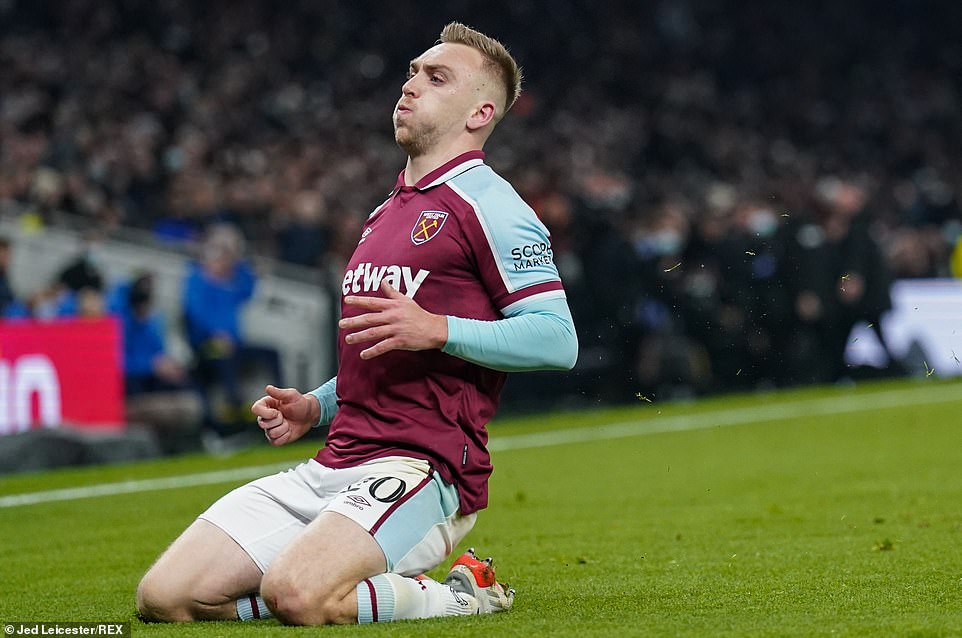 However, minutes after Bergwijn’s opener, Jarrod Bowen was on hand to punish a Eric Dier mistake and equalise for West Ham 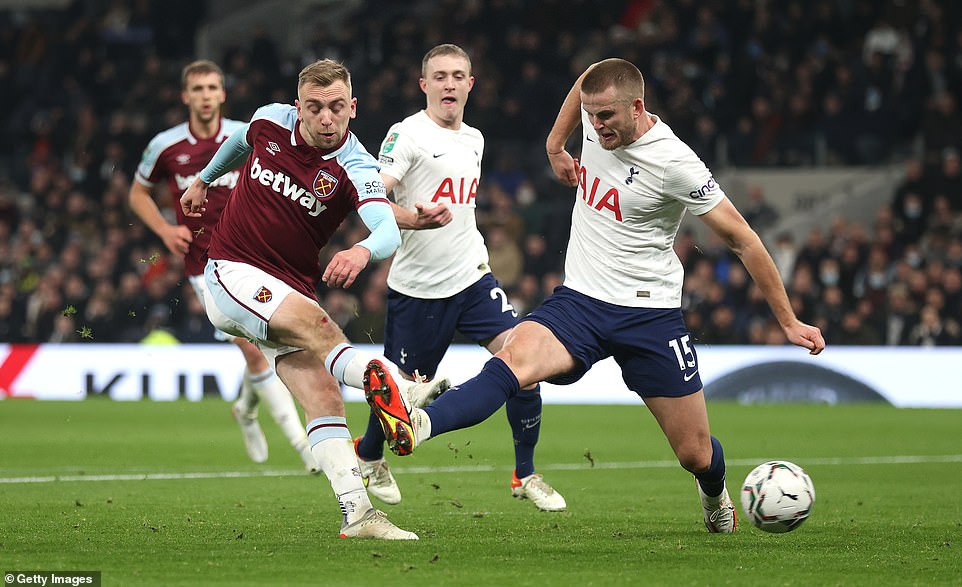 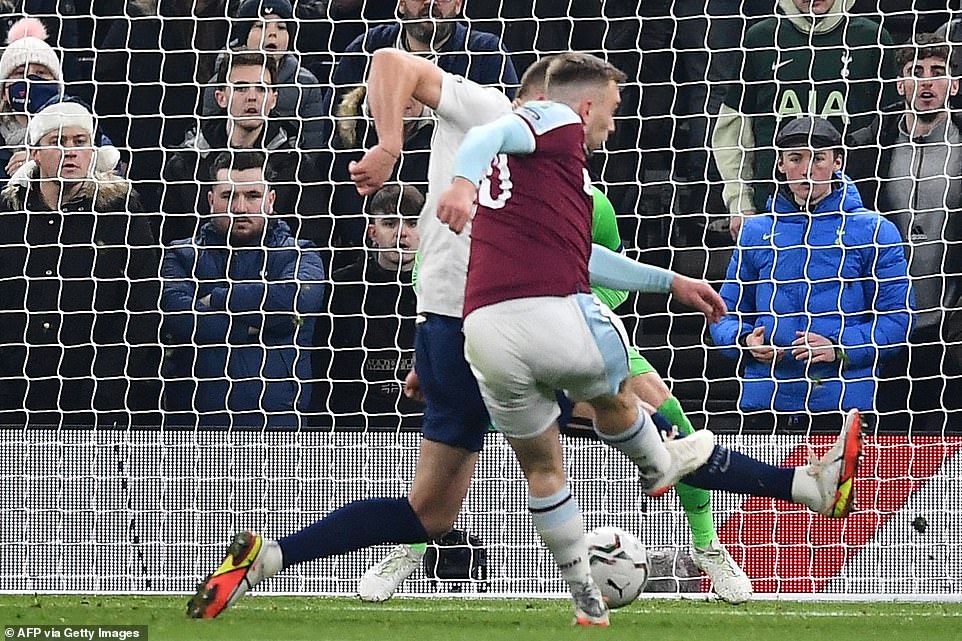 Bowen faked out Dier, who gave the ball away cheaply from a goal kick, before sending a shot past the Spurs centre back 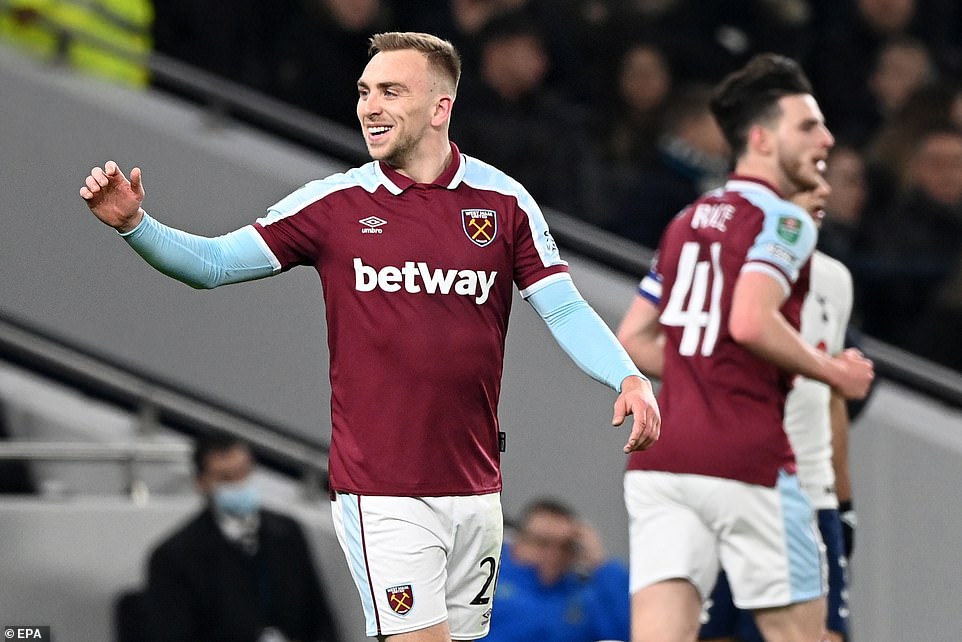 Manuel Lanzini probably thought nothing of it when he let Bergwijn rampage past him into the box.

A second later, the Dutchman slid the ball into Moura’s path to allow the Brazilian to slide Spurs back into the lead.

You didn’t want it to end; the second half had plenty to live up to – and credit to the Hammers they came out fighting.

The fact Conte introduced Heung-min Son and Harry Winks in the 60th minute told its own story. His team were up against it.

Bowen’s pace and directness was causing Spurs problems, while Rice and Soucek had finally gained a foothold in midfield. 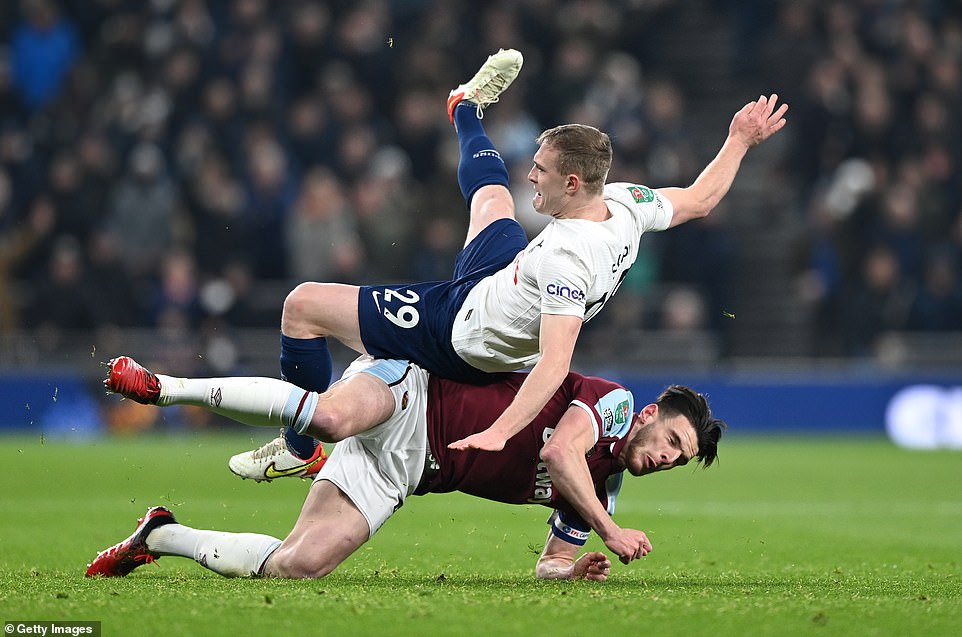 It was a full-blooded affair in north London, with West Ham skipper Declan Rice colliding with Oliver Skipp during a tackle 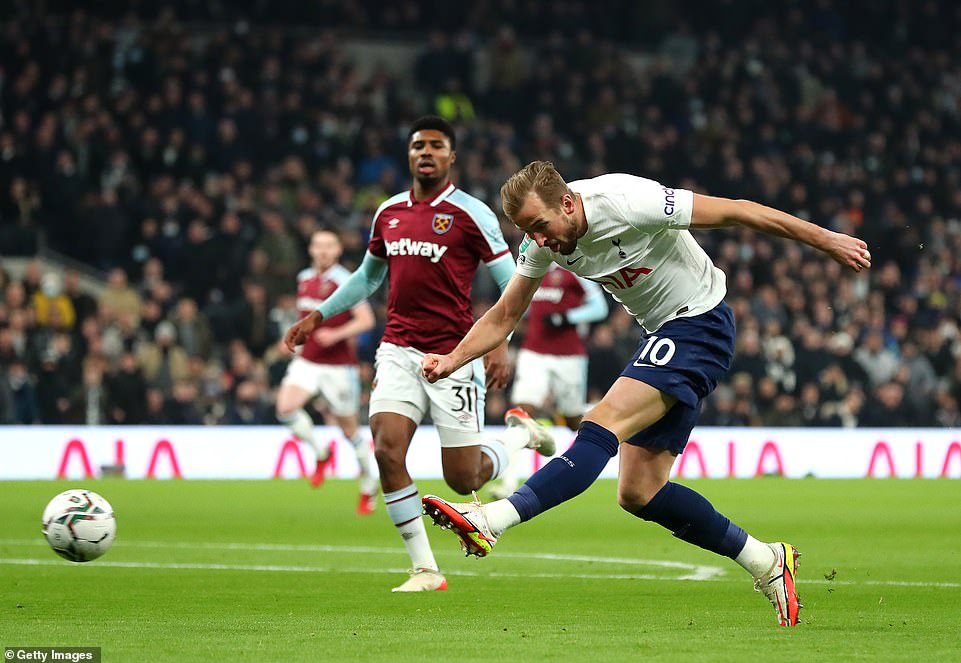 Kane tries his luck at goal, shooting across goal to then force a save from the West Ham goalkeeper during the first half

But trying to break down Tottenham’s increasingly well-drilled back five was becoming tiresome for Moyes’ men.

Substitute Said Benrahma sent an effort narrowly wide with 10 minutes left on the clock as West Ham threw caution to the wind.

Tottenham would probably have crumbled under Nuno. Not any more.

Hojbjerg was heroically throwing his body on the line at the end, Davinson Sanchez and Ben Davies were clearing and heading everything West Ham had to throw at them – though Lloris did tip Bowen’s deflected effort over the line in injury time to get Tottenham over the line.

This is a team very much in Conte’s mould. Guts, intensity and cutting edge.

So, can Conte finally end Tottenham’s trophy duck? Who knows – but he and his players appear ready to suffer to do just that. 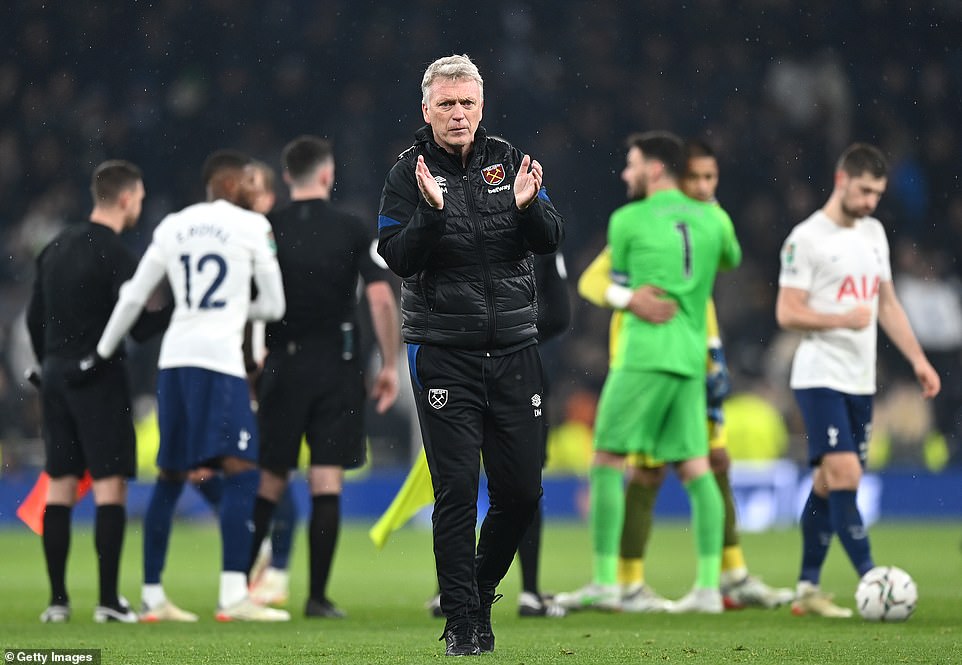