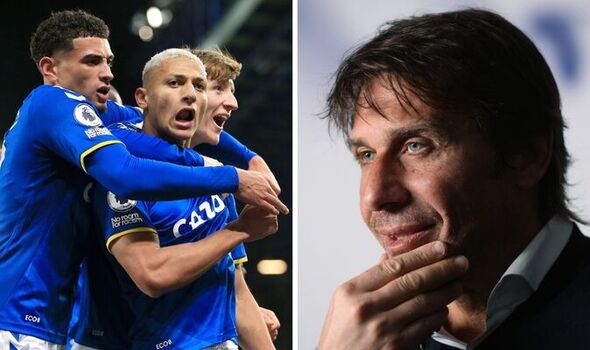 Tottenham are interested in signing Richarlison, Anthony Gordon and Ben Godfrey as Everton battle to keep their heads above water, according to reports. Frank Lampard’s Toffees can take another step closer to safety on Wednesday evening when they travel to Vicarage Road to face Watford, who were relegated to the Championship on Saturday after a 1-0 defeat at Crystal Palace.

However, Everton are not over the line just yet despite back-to-back victories over Chelsea and Leicester.

The uncertain nature of their status has placed a number of their fellow Premier League clubs on red alert, particularly given some of the quality within the squad.

According to The Telegraph, Tottenham are watching the situation closely and Spurs hold an interest in Richarlison and homegrown duo Gordon and Godfrey.

Both payers tick an important box for the Toffees, who also have a number of other English players within their squad including Jordan Pickford, Dominic Calvert-Lewin, Dele Alli, Michael Keane, Demerai Gray and Andros Townsend.

That’s why the likes of Gordon and Godfrey remain high in demand, despite the defender’s shaky performances at the back this season…