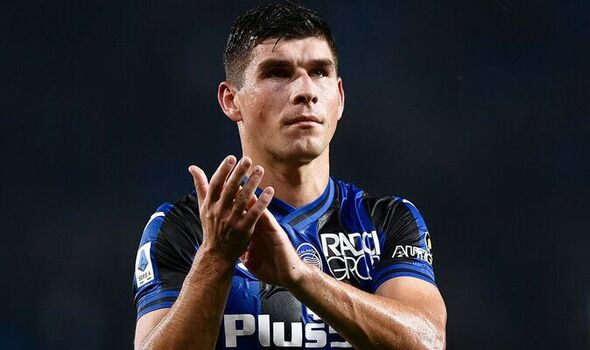 Tottenham have seen their chances of signing Atalanta midfielder Ruslan Malinovskyi boosted after it was reported Marseille have pulled out of the race to buy him. Atalanta have named their price for the 29-year-old, whose contract is set to expire at the end of the season.

Malinovskyi has been linked with a move to Spurs for several months. His contract situation means he is available for a lower price than if he still had a long-term deal.

Former Juventus and Inter Milan boss Antonio Conte returned to Serie A last January to sign Rodrigo Bentancur and Dejan Kulusevski. Cristiano Romero has also since made his loan move permanent, while Ivan Perisic arrived on a free transfer and Destiny Udogie joined before being loaned back to Udinese in the summer.

And it appears a raid on the Italian top flight could happen again next month. Calcio Mercato says Spurs’ path to signing Malinovskyi has been made easier after Marseille ended their pursuit.

Atalanta will no longer settle for £12.8m (€15m) for Malinovskyi and instead have upped their asking price to a minimum of £15.4m (€18m). That is too much for Marseille, who were instead hoping for either a loan deal or a swap.

But that is likely to be a fee Spurs can afford. Calcio Mercato do not name any other team who are interested in Malinovskyi, so the north Londoners could potentially have a free run at purchasing him.

Malinovskyi is an attack-minded midfielder who joined Atalanta from Genk in 2019. He has made 142 appearances for the Serie A club, scoring 30 goals and registering 28 assists.

Spurs boss Conte is keen on adding to his squad in January. Speaking in October, he admitted he does not have enough depth to compete for multiple major honours.

He said: “My only worry in this moment is that we have to try to keep the fingers crossed that we don’t have injuries because we are not a team with a squad depth to face competition like the Premier League and Champions League. But this is not something against the club, we knew this situation.

“I spoke with the club at the start of the season, I said ‘We have to go step by step, time and patience to have two, three transfer markets to bring this squad (to be) competitive to play two important competitions.

“This situation makes me frustrated because I’d like to play these type of games and the Champions League with the best team, then on the bench have three, four, five good substitutions.”