Roy Keane could hear just how bad Trent Alexander-Arnold thought his injury was after coming off in England’s 1-0 win over Austria on Wednesday. England were playing their first of two warm-up matches for the 2020 European Championships against Austria with Southgate naming a makeshift starting line-up.

Alexander-Arnold’s place in the England squad had been a main talking point over the past few weeks but he was named in the starting XI at right-back.

And he showed glimpses of his skill on the ball in picking out a pass from range but was otherwise untested in defence.

England broke the deadlock midway through the second half as well through a well-worked goal when Bukayo Saka tapped in to an empty net.

The game looked to be heading for a pleasant evening for Southgate with England starting off the international campaign in good form. 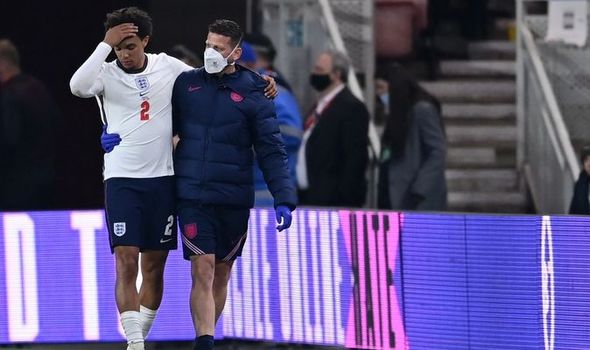 But disaster struck in the final few minutes of the game when Alexander-Arnold pulled up with a leg injury.

The Liverpool full-back immediately looked in discomfort as he signalled to the bench that he needed to come off.

Eventually, England’s medical staff came over to help Alexander-Arnold walk around the pitch and back to the dressing room to receive treatment.

He could be seen speaking with the medical team and putting his head in his hands as he struggled to walk.

And Keane, who was part of ITV’s punditry team for the game, could hear Alexander-Arnold “swearing” as the defender hobbled off.

“We won’t obviously jump the gun but it didn’t look good there,” Keane said on ITV.

“He was walking past us and he looked really uncomfortable.

“He was swearing quite a bit so it doesn’t look good.

“The guy looks in big trouble.”