Liverpool are struggling in the Premier League this season because they don’t have any natural goal-scorers. That is according to Watford striker Troy Deeney, who has laid into the Reds’ front four following their damaging 1-1 draw against Newcastle on Saturday.

Liverpool dominated the first half against the Magpies but only went in at the break 1-0 up thanks to Mohamed Salah’s goal.

Jurgen Klopp’s side had 69 per cent possession and 22 shots, nine of which were on target, but failed to make their lead more comfortable.

Salah started alongside Sadio Mane, Roberto Firmino and Diogo Jota in an attacking line-up but all four forwards missed presentable opportunities to make the game safe.

They appeared to have got away with it when Callum Wilson had a late equaliser ruled out by VAR for handball, but Joe Willock netted in the fifth minute of injury-time to dent Liverpool’s top-four hopes.

With five Premier League games left to play, Klopp’s side are sixth, four points adrift of Chelsea and Deeney believes their problems stem from the lack of a natural striker up front.

JUST IN: How Arsenal could line up next season if Daniel Ek’s takeover happens 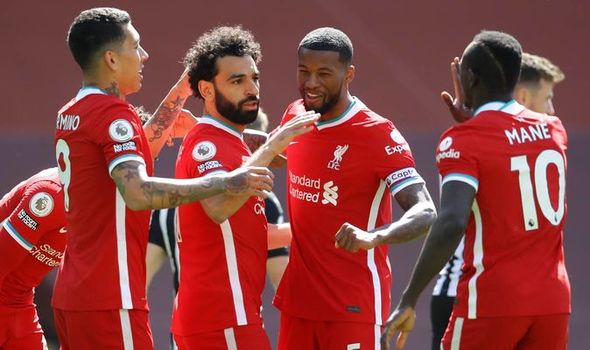 “I’m going to say something and I’m probably going to get hammered for it. They’re not natural goal-scorers, any of the four,” he said on talkSPORT.

“I’ve been on record before, I think Firmino is excellent but he’s not someone I sit back and think he’s going to get 25 or 28 goals a season.

“Salah is a winger. Look at Newcastle, look at how many chances he missed. If they fell to Harry Kane we would have said he had a bad day.

“They are not bad players, but it’s that natural finishers instinct that certain players have. These players are more creative and introverted wingers.

“Salah gets a lot of chances. One game he might score five and seasons like this he might have four or five games where he doesn’t score.

“With the Newcastle game, Liverpool could have been 6-0 at half-time and we’re having completely different conversation.”

Liverpool have struggled massively this season while trying to defend their Premier League title and their form against sides at the other end of the table is particularly worrying.

Who is Daniel Ek? The Spotify billionaire who wants to buy Arsenal

The Reds have often failed to break down teams intent on sitting deep in a low block and Klopp admitted his forwards were wasteful against Newcastle.

“Very tough to take but there is nobody else to blame but ourselves,” he said post-match.

“When you create chances like we created today and you don’t use them then you keep the game open.

“That’s what we did, but again, that’s football – the oldest and most important football rule [is] you better use your chances when you have them because they will come back again.

“That’s what we didn’t do and that’s why in the end Newcastle deserve a point.”

Salah is Liverpool’s top-scorer this season with 29 goals, while Mane has 13, Jota has scored 12 and Firmino has contributed just six.