58 min: Rodrigo tries his luck from distance! It’s a wonderful strike with his left, curling in, but it’s just a fraction over the bar. Trapp was beaten, so close to an equaliser

53 min: Sane’s nearly in himself just a minute later, but he just doesn’t want to use his right foot to strike, and it’s cleared for a corner as he tries to switch it to his left. De Gea is called into action from the corner once again

51 min: Gosens latches onto a great cross field pass, and he finds Werner in the box. He takes the ball past his man deftly to the right, and then fires it home past De Gea, who has no chance this time, he doesn’t even dive for it 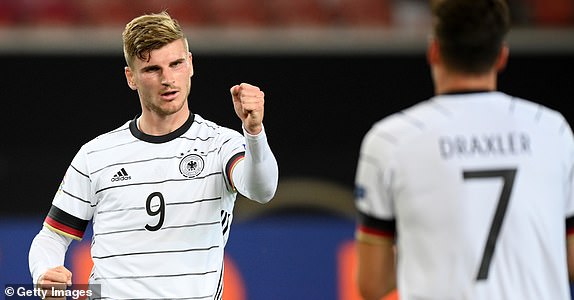 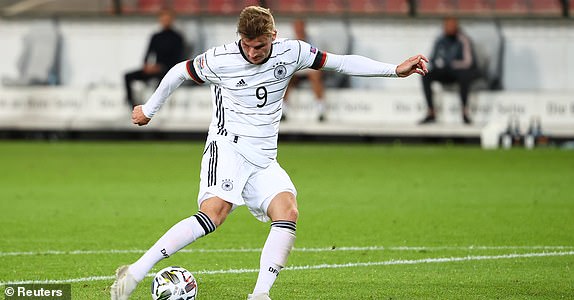 48 min: Werner has it, and he has the chance to run it into the box. He goes to the byline and gets his cross past Sergio Ramos, but one of his team-mates comes in to clear. Signs of life from the new Chelsea man

Germany get us kicked off, are there any goals out there?

17-year-old Ansu Fati is coming on for Jesus Navas, who is double his age 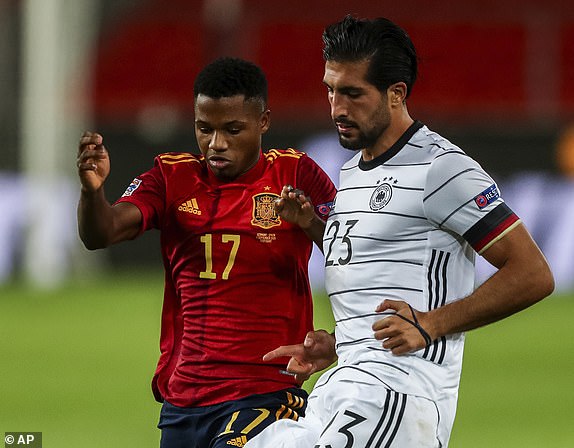 We have one result: Latvia 0-0 Andorra

Every other game is at half-time

Intriguing one… Both teams have a lot of quality, but they haven’t been able to convert it into goals so far. Both goalkeepers are on form, but will that continue into the second half? 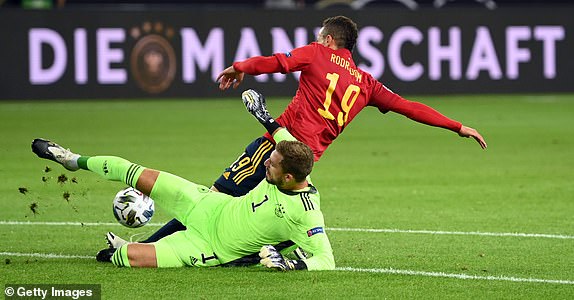 45 min: Rodrigo is through one on one with the keeper after skipping past his man, but it’s well saved by Trapp! And that’ll be the last attack of the first half

44 min: Once again Germany have a good chance to come forward with numbers, but once again they waste the final ball. Both teams lacking quality in the delivery so far

41 min: Straight down the other end now for another worked Spanish play. Once again Germany stand firm, and Spain have to come again

39 min: 3 on 3 here for Germany, with Draxler on the run. He’s fouled on his way through, and Germany have a good opportunity. Wasted… Sule is offside as the kick is taken… Although on the replay, he may have been played on by a man on the far side. Nothing VAR can do now of course…

It’s been the De Gea show so far, as he’s already made a number of good saves to keep his side in it. Although it was arguably Spain who had the best opportunity, wasted by Rodrigo 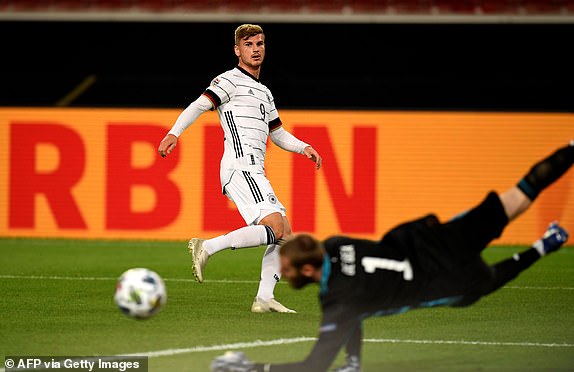 35 min: We’re being subjected to a bit of a quiet period after some action at both ends. Who knows how fit these players truly are, and some of them might already be looking forward to half time

31 min: Nice flick from Sane as Germany come away, but it’s a good challenge to win it back, and he goes down in a heap. Referee isn’t interested 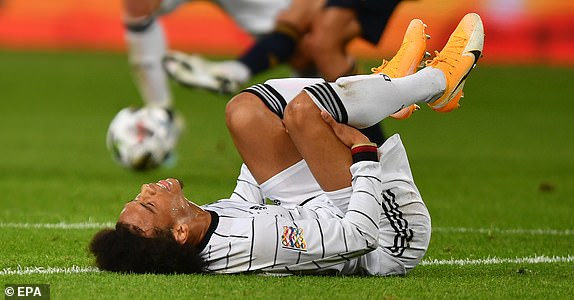 Still 0-0 in Finland vs Wales and Bulgaria vs Republic of Ireland.

In fact the only goals so far across the 10 games have been from Moldova, Ukraine, and believe it or not, the Faroe Islands. They just love playing against Malta. 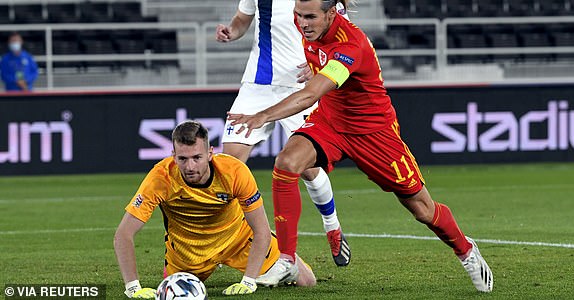 25 min: Good possession for Spain, but they need to find the final ball. Here comes a corner, once again Thiago and Fabian are over it, they’ve clearly been practicing set pieces. This one doesn’t lead to as good a chance though, as Germany bundle it clear

21 min: Good run from Ferran Torres, and he earns a free kick in a good position for Spain.

Thiago and Fabian are standing over it, it’s Fabian who takes it, and it’s to the far post where it’s headed down for Busquets who strikes low! But Trapp is equal to it 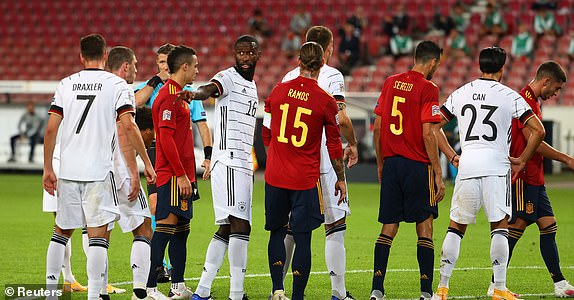 19 min: Another top save from De Gea. Sane lashes a shot from the corner of the box and De Gea tips it wide. Dean Henderson won’t be liking this performance so far, as he wants to nab that keeper spot at United, and his rival has made three great saves in the first 20 minutes.

18 min: Given away to Werner, but he hasn’t had much support on the flanks yet. He’s able to get a cross in, but it’s blocked by Gosens

14 min: It’s a blunder from Germany, as a wayward back pass gives Trapp an awful time, but Rodrigo can’t get the ball under his feet properly for the shot with the net gaping, and the goalkeeper gets back to tackle him outside the box. Leeds fans won’t be impressed with that effort from their new signing

At the other end, Draxler gets a good shot away and once again De Gea has to leap into action for the save 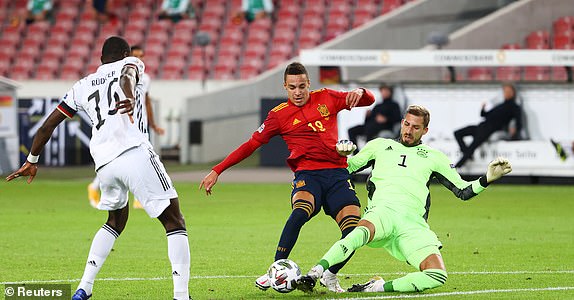 11 min: Nice passing from Germany, and Kroos lifts a beautiful ball across to Kehrer, who dives in with a header. De Gea just gets down to his near post and it’s out for a corner, which Ramos clears

9 min: Werner is in behind after a through ball from Draxler, but the linesman has his flag up, and it’s a good call. De Gea got a hand to his shot anyway

8 min: Chance for Toni Kroos to hit a target in the box here. He actually goes short to Werner on the left, who swings a cross in but De Gea is equal to it

6 min: Emre Can gives away a foul. He gets the ball first, but it’s a bit of an aggressive slide through and the referee calls him up for it. Spain elect to play it around the back once more. 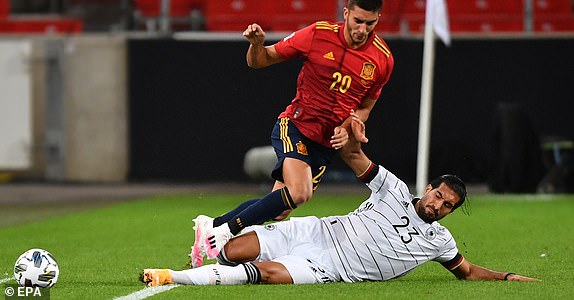 4 min: Spain passing it around in their own half, as Germany press them. They’ve tried to get Torres and Can going down the left with long balls, but no dice so far 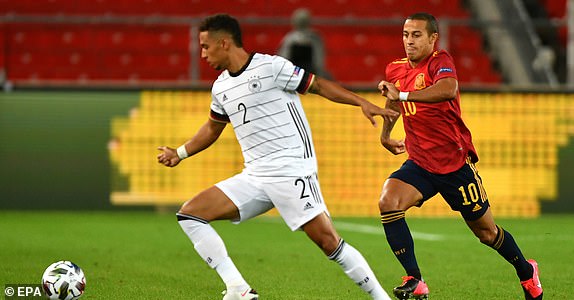 2 min: Spain have held the ball for the first couple of minutes, making Germany do the running without making much headway.

Spain get us underway, an exciting 90 minutes ahead we hope

The players are on their way out of the tunnel, ready for the national anthems 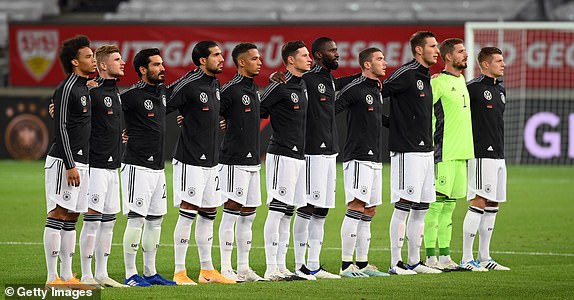 With the lack of Bayern players in the squad, Joachim Low has given the nod to Robin Gosens tonight for his debut. The 26-year-old Atalanta player will likely have his work cut out tonight.

Like we mentioned earlier, it’s a debut as well for Ferran Torres for Spain. The former Valencia man is now at Manchester City, and has the chance to impress his new bosses against a tough side.

Not long to go now, as the players go through their warm up routines out on the pitch in Stuttgart 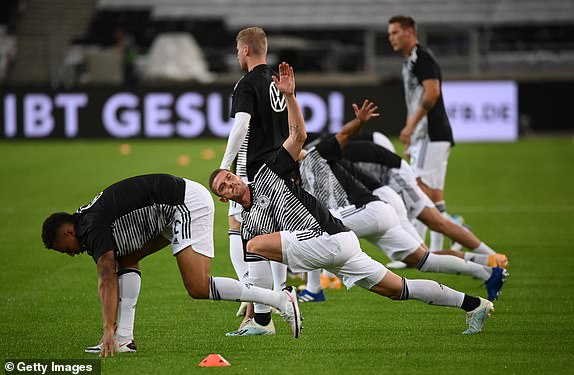 Kick-off is at 7:45pm BST, and if you’re in the UK you can watch on Sky Sports Premier League.

The players involved tonight haven’t had long to rest at all over the summer, so we might see some tired legs going into the second half tonight.

Germany boss Joachim Low doesn’t think many of his players will last long, and has only included two Bayern Munich players, Leroy Sane and Niklas Sule, in his squad, since they were playing in the Champions League less than two weeks ago

Spain vs Germany is a running theme lately, but you can’t see an 8-2 demolition on the cards like when Barcelona took on Bayern Munich in the Champions League last month.

Believe it or not, the two international teams haven’t faced off against each other in an official competition since the 2010 World Cup semi-final, which Spain won 1-0.

Some familiar faces and some new additions in the Spain lineup tonight. It’ll be a debut for Ferran Torres, who joined Manchester City over the summer. 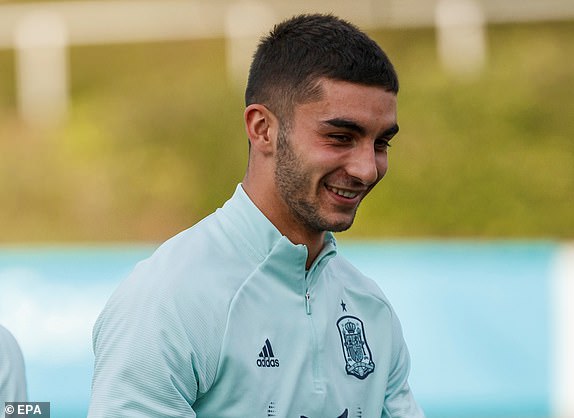 No Kai Havertz then, so Chelsea fans will have to wait a little while longer to see him in action, but they do have a chance to watch other new arrival Timo Werner at work 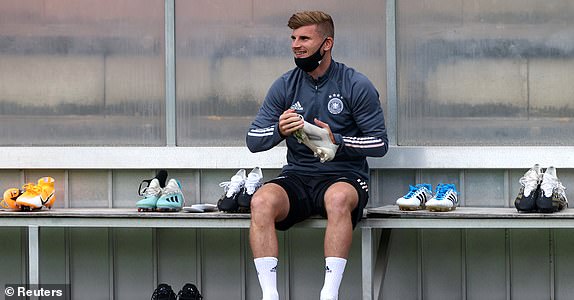 Germany vs Spain is tonight’s incredibly intriguing match that we’ll be focusing on, and we’re about 10 minutes away from learning the lineups.

We’ll have live commentary for that match, as well as updates for Wales and Republic of Ireland too. 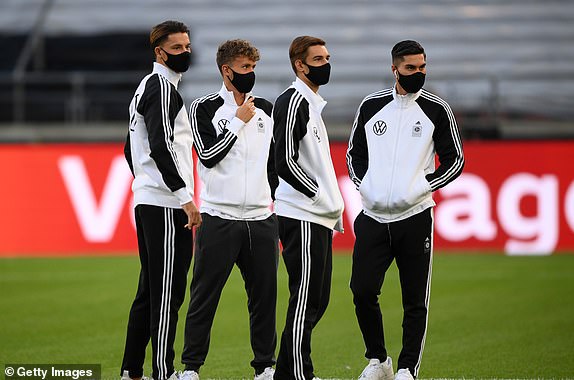 International football is back!

Welcome to Sportsmail’s live coverage of this evening’s UEFA Nations League match between Germany and Spain.

We’ve had a long hiatus from international football due to the pandemic, but we’re getting back up and running tonight with 10 games, including Wales vs Finland and Bulgaria vs Republic of Ireland.

The UEFA Nations League is back as Germany host Spain this evening for the new season of the competition.

Elsewhere, Ryan Giggs’ Wales visit Finland in the first match of League B with group four rival Republic of Ireland making trip to Bulgaria this evening as well.