Home » Soccer » ‘Using your head is probably not a good thing’: Safety concerns for soccer kids

Soccer’s national governing body is reviewing medical evidence for whether young players should be taught how to hit the ball with their heads, a practice that has been banned for younger children in the United States and Britain.

An expert working group, which met for the first time on Thursday, will make recommendations that will flow on to state-level associations running Australia’s most popular team sport, played by 15 per cent of children under 14. 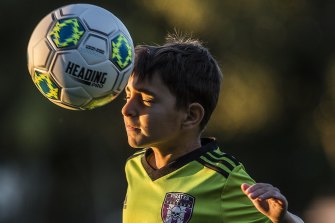 The rules of the game, as set by FIFA, allow players to hit the ball with their heads – called “heading” – but there is growing concern the practice could damage the brain, especially for children because of their softer skulls.

Kerry Peek, a senior lecturer in physiotherapy at the University of Sydney and a globally recognised researcher in the health effects of heading, said there were indications heading the ball could damage health but no conclusive evidence.

“Using your head to hit an object is probably not a good thing, so logically we need to make sure that that is done as safely as possible,” Dr Peek said.

Dr Peek is one of about seven medical experts who met for the first time last week and will advise Football Australia how to approach concussion injuries and “heading”.

Soccer insiders say heading rarely occurs in children’s matches because the ball is less airborne with smaller players on a smaller pitch, but it starts to feature when players hit their teenage years.

Across Sydney, some clubs avoid heading for young players as a precautionary measure, while others teach heading technique from a young age so they are prepared for when it comes up in a match.

Jim Apostolovski, a senior figure in NSW football, banned heading for the under-12s when he was president of APIA and he believes the governing bodies should make it a universal ban.

However, Dr Peek, who also advised the Union of European Football Associations on its heading policy, said as long as heading remained in the official rules, players needed to be coached how to do it properly.

She said the training could help players avoid injury in a match when it was a high-pressure situation and balls were faster and harder and the technique could be taught with soft balls – such as those developed by Heading Pro, which halve the impact – or even with no ball at all.

“Banning it and then suddenly being confronted with it later on in the game when you can actually really hit it with power because you’re now 13 or 14 years of age, if that’s the first time you’re introduced to heading the ball, that I find is quite dangerous,” Mr Morris said. 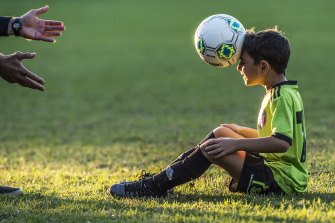 Alex Nitsas, 7, being taught proper heading technique to prepare him in case it comes up in a match.Credit:Steven Siewert

Mr Morris said appropriate training drills had the children sitting down, while the coach gently threw soft balls at them, to train them to hit the ball with their forehead rather than the top or side of their heads.

That is how Alex Nitsas, 7, trains with the Ashfield Pirates under-8s team , part of the Canterbury District. His father Dimitri Nitsas said: “Nothing worries me – it’s part of playing soccer.”

Mr Morris said the players in that study would have been playing with leather balls that were “almost like medicine balls” when wet, whereas modern balls were softer and lighter and the special balls for heading training were softer still.

Last week the Japan Football Association introduced guidelines for how heading should be taught to under-16s. UEFA made a similar move in June last year, focusing on doing it safely rather than an outright ban.

A Football Australia spokesperson said an expert working group would “review, monitor and ensure we are abiding by evidence-based best practice, including any need to continuously evolve our rules, guidelines and policies to all matters relating to concussion”. He said the group would also examine heading generally, not just in the context of rare concussions.

“If there are any changes, we’ll fall in line,” Mr Hugg said. “But until such a time that someone tells us otherwise, we are just going to continue to try to understand the amount of heading that young kids experience in a game, and how we can minimise the risk of injury.”

Matt Levinson, who coaches his son’s under-11s team in the Balmain area, said he did not teach heading in training and discouraged the boys from using it in games given it was banned for children in some countries.

“We want to make sure they’re having a great time together, enjoying a team sport but at the same time we’re taking care of their brains,” he said.

Mr Levinson said he would appreciate clear guidance from the club and football governing bodies on when and how to introduce heading.

Our Morning Edition newsletter is a curated guide to the most important and interesting stories, analysis and insights. Get it delivered to your inbox.