Home » Soccer » UWE ROSLER: We are still on thin ice amid coronavirus pandemic

UWE ROSLER: The Bundesliga’s return has worked so far and I felt as safe as I could be while managing Fortuna Dusseldorf… but we are still on thin ice

Here he tells MATT BARLOW about German football’s new reality after returning to action with a 0-0 draw against Paderborn on Saturday.

It is not normal. In all these years in football I have never experienced anything like this, with all the testing, one week in a quarantine hotel and a new way of communicating in order to be extra secure so the season can restart.

It has been difficult to refocus on football but our players did fantastically well. Not only in the last week but in the weeks before. We trained through 10 weeks without a game. Three weeks at home and then in small groups. Then a week with the whole team training together with full body contact. 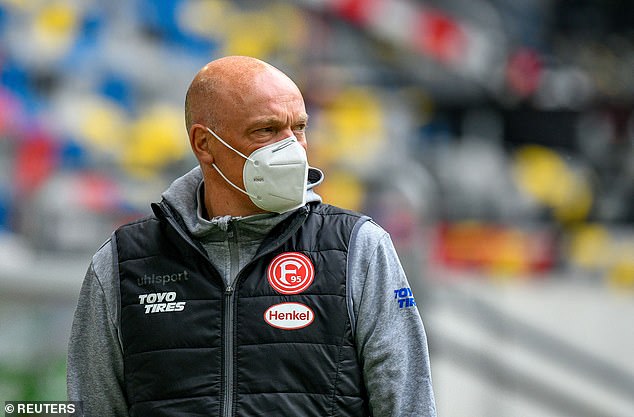 There were no practice games. Considering all that, I was relieved we came through in decent shape on Saturday. We left the hotel for the stadium and found the dressing rooms had been redesigned and rebuilt. Only a certain number of players were allowed in each room. We put some in the doping room and spread out into different areas.

Luckily we have a modern stadium with good facilities. We prepared for the game with a longer meeting in the hotel and I went around the small groups in the dressing rooms to get my messages across. The warm-up procedure was to go out in masks and take it off only when you go on the pitch. You could only go out in small groups, in your slot. Leaving the pitch you put the mask on again.

There were lots of small changes. We were only allowed 10 staff members on the bench and the substitutes were in the stand. We normally have a coach in the stands who comes down to the touchline, which was not allowed. The sporting director normally comes into the dressing room but he wasn’t allowed.

A few hours before the game I was told I didn’t have to wear a mask during play. That helped. With a mask it would have been torture because you can’t really breathe under it. 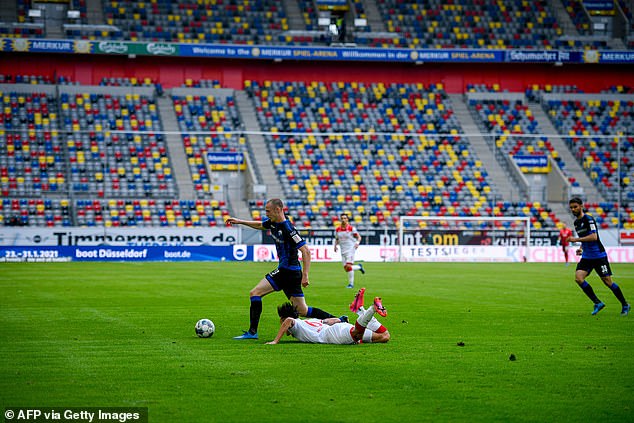 Our players adapted well. We had nine weeks without body contact but our stats showed 65 per cent success in the duels — better than normal — and that showed me the players were in the right frame of mind.

The tempo was lower, we didn’t know how much we had in the tank. The endurance stats were good but the speed in transition was lower from both teams. Unfortunately we had four shots against the bar and posts and could not find any reward. Lady Luck was not on our side. After the match, there was a Press zone where the players went in individually and the journalists asked questions by video.

Overall, it was a relief to restart and to find we were competitive. We have eight games to play and they are all big games.

This is an opportunity for German football — and I said this to the players — to present themselves to the world. You never know what will come of that. I had lots of messages from England before and after the game.

I can say this has worked in Germany. I don’t know if it will work in another country with different factors, a different culture. We should not tell the whole world how it is done. It has worked so far but we are still on thin ice. 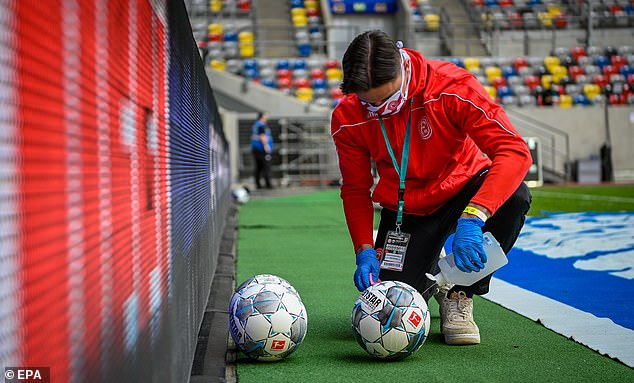 The players now go back to their families. We are out of quarantine and things will happen in different clubs, there will be more positive tests.

We have been tested six times in two weeks — 50 people each time — and not one has been positive. We know the inner circle in the club is safe and we have started testing wives, partners and children.

That has spread confidence. I cannot afford to get the virus (Rosler beat cancer in 2003) but as long as I am inside the club and my home, I feel as safe as I can be. There’s no guarantee but everyone is taking it seriously and understands the responsibility we have for each other.

It has taken enormous effort and discipline by everyone — politicians, the German league, medical taskforce, players and staff — to fulfil the regulations.

The start has been successful but we are still not sure the season can be played to the end. We hope but we cannot be sure. We’ll see week by week.