Veljko Paunovic may have seemed like a left-field appointment for Reading when he arrived at the end of August.

It takes mere seconds into a conversation with him, however, to realise how simple a decision it must have been for the club hierarchy to hand him the job.

The 43-year-old Serb has an extremely-engaging presence. He is cultured, well-travelled and has been on a remarkable journey in his career from Strumica in Yugoslavia (now North Macedonia) to Berkshire – with stops in Spain, Russia, Germany, the USA and more in between. 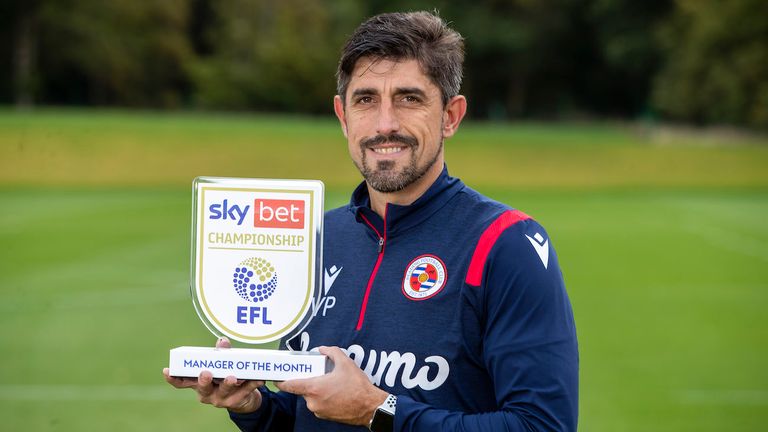 Paunovic started his career at Atletico Madrid and played with some incredible players – Christian Vieri, Fernando Torres, Diego Simeone to name a few, and he has managed and been managed by some of the best. But it is his late father – former Yugoslavia international Blagoje Paunovic, who won 39 international caps and was part of the side that got to the final of the European Championships in 1968 – who still inspires him more than anyone else he has crossed paths with, even to this day.

Sadly, Blagoje passed away six years ago aged 67, less than a year before Paunovic managed Serbia U20s to the nation’s first international triumph, winning the World Cup in 2015. It was a fitting tribute from a son to a legendary figure in his home country, and one that still fills him with pride.

“My father was a great player,” Paunovic tells Sky Sports, after winning the Sky Bet Championship Player of the Month award for September – having led Reading to a perfect start to their league campaign.

“He is the first one I saw. He didn’t see our success but he was definitely the first influence and the biggest one I had.”

Growing up in Yugoslavia in the 1980s and early 1990s was not easy. Football was an escape for Paunovic, even at times when he had to walk four hours to get to training, often on an empty stomach.

He and his father shared an obsession for football, though, which kept him motivated and driven. He would grow up hearing stories of his time as a player and a manager, and when he was 17 his father helped him get a move to Atletico Madrid so he could fulfil his potential. But for Paunovic Snr it was about so much more than just turning his son into a great player.

“He instilled values in me that I still carry to this day,” continued Paunovic. “Values that are important to be successful in life, not just in football.

“It is about dealing with people and being respected, and I think the most important thing that you can aim for is integrity. That is what I learned from him. He had all those values and I can only tell you how much he impacted people, and how overwhelming the reaction was in Serbia when he passed away.

“I was reached by so many people who told me stories about how he helped them and how he behaved in certain situations. I was very proud and I still am very proud of my father.”

Paunovic began his coaching career by working his way through the Serbia youth teams from 2012 to 2015. Starting with the U18s and finishing with that U20 World Cup win. It was the crowning achievement of his managerial career so far, but he took so much more from it than just that.

For Paunovic, as it was for his father, it is about developing his players as people, too.

“That is a huge part of my philosophy and part of how I measure my achievements,” he says. “It is about seeing how they compete and play, but it’s also how they behave as people, what they say in the media, and how they carry themselves and keep themselves accountable to those values that we instilled in them.

“We started that [with the Serbia youth teams] in 2012 and took it to late 2015. I’m very happy with what we achieved, and I’m always going to look at myself as a coach that educates and impacts people in the best possible way.”

You can tell why Reading’s hierarchy were so taken with Paunovic. And it helps that he has also learned from some of the best. At Atletico Madrid he played under the great Radomir Antic, who gave him the chance to sign for the Spanish club at 17, and as a player he also used to share a room with Simeone.

“Antic gave me the opportunity to have a career in this wonderful sport as a player,” he said. “He pushed me to the professional level.

“Simeone also influenced me a lot and I was so impressed with his passion for the game. In his last season at Atletico we shared a room at various times and he was already preparing himself for coaching. He would note down all the sessions and then discuss them with me. 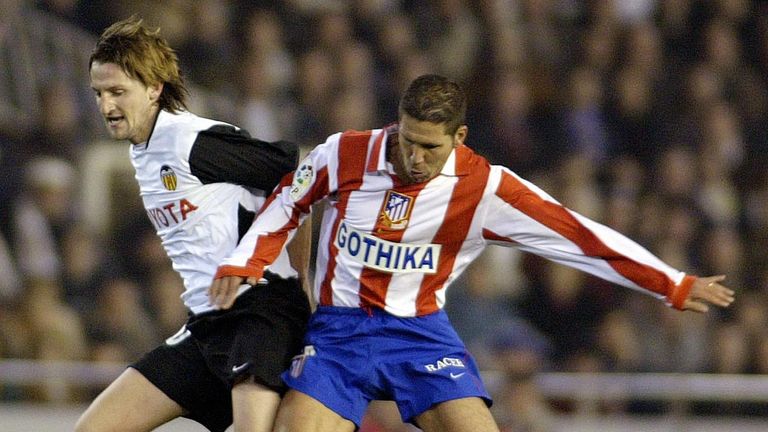 “I was passionate for coaching but not quite at his level. I was 26 or 27 at the time and he was about 35. He was already preparing.

“We met again a few years ago at an event in Spain and he invited me to see his side train. I would go and watch a lot of sessions and he once said to me, ‘Pauno, everything starts and ends with the player’.

“It is all about how you impact upon your players. I truly believe that’s some of the best advice I ever got.”

A little more back in the present and it seemed as though Paunovic was destined to work his way up and one day become the boss of the senior Serbia national side.

Instead, he opted to move to Chicago Fire in the MLS in 2015, where he stayed for four years.

“Football takes you where it wants,” he said. “I read that in a book about Mauricio Pochettino, and he says that was what he was told by his old coach Jorge Griffa (a legend of Argentinian football), and I took it for me as well. 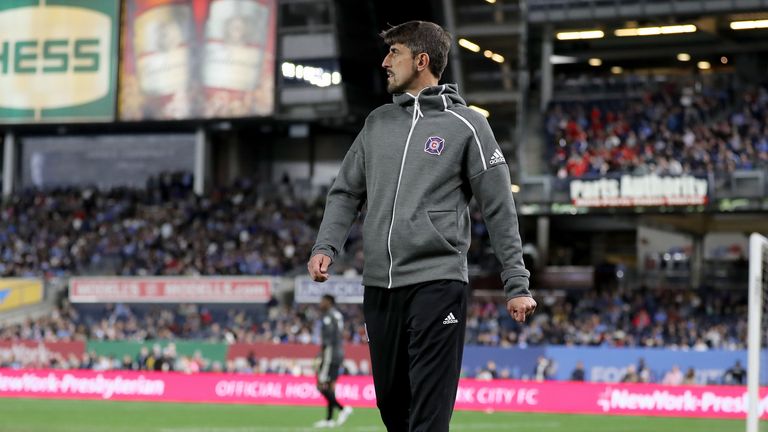 “If you look at my career as a player and a coach you can see I have travelled a lot around the world. I found a project [at Chicago] with people who were fantastic for my development and very supportive. They gave me the chance to work in a fantastic league that is still growing and expanding, and has incredible resources and potential.

“They mentored me and helped me, and I learned a lot from them. They also guided me and let me make my own decisions and mistakes. That is what I was looking for and I’m very grateful for that. I also led them to one of their best-ever seasons in 2017.”

His experience in the MLS was also a great grounding to help him hit the ground running with Reading. The Championship is considered the most unpredictable league in the world, but if you can deal with what the US continent can throw at you, you can deal with anything.

“In every country the football is different,” said Paunovic. “In every league it is different. It is not just technical things. For example, in the MLS you don’t have relegation so you have to find different ways to motivate your players to reach the goals you have set.

“It is also peculiar playing across a continent. We had a situation where we played in zero degrees in Chicago in early March, then three days later we flew to Florida and played on artificial turf in 30 degrees. Three days later we would be in Colorado playing at altitudes of 2,000m, then we would be back in the Windy City in the cold. I would pay money for those kinds of experiences now because I’ve learned so much.”

Paunovic is a man who never stops educating himself and will never think he knows it all. He is also a big believer in learning from his players, whether it be Bastian Schweinsteiger at Chicago, or a kid from the academy at the Madejski Stadium. 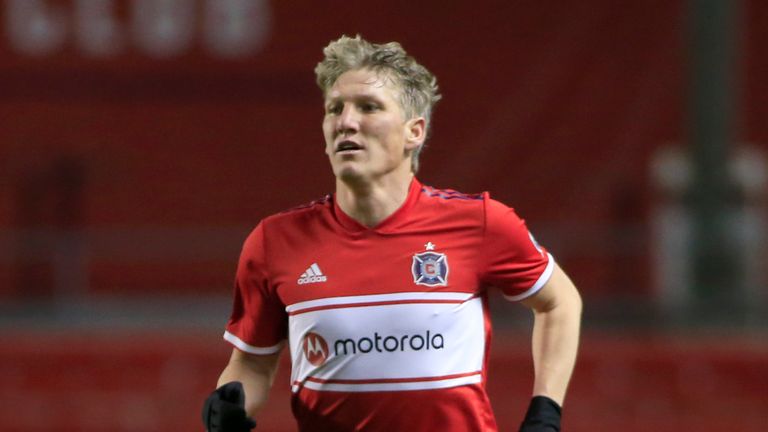 “It was a great honour to work with Schweinsteiger and to coach him,” he says. “He was an absolute leader of the team and I could still learn from him. I even learn from the younger players at Reading now – like Ethan Bristow, who is just 18.

“Coaching is a two-way communication and a relationship, and at the same time as you learn and communicate and teach your players, you also learn from them. They are all unique.

“I think my philosophy has always been the same but I have learned and evolved as a coach. I have more experience now than I did eight years ago when I started, and I think coaching is always a work in progress.

“But one thing I always have and always remind everyone of is that the players are at the centre of my philosophy. I work and build around the player, what he needs, or what he doesn’t need and has to get rid of. I try to create a protective learning environment and a winning environment, and provide all the resources we can to achieve that.”

There is one more player who comes up in conversation whom he learned a lot from, even though he met him as a youngster while he was in the latter stages of his career at Atletico. 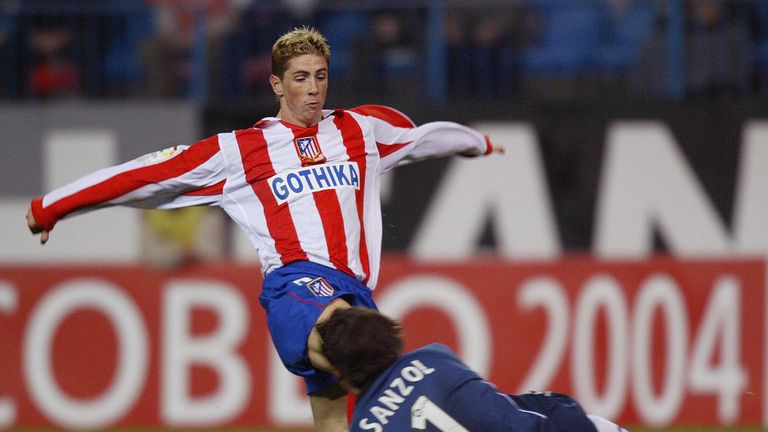 “I enjoyed playing with great players my whole career,” he said. “But I had a very close relationship with Fernando Torres. He was just starting out when I was at Atletico and in him I saw a better version of me. A WAY better version!

“I keep in touch with him now and he called me a few weeks ago when I got the job at Reading to catch up and give me some advice.”

And what was that advice? Paunovic answers with a smile…

“He said be careful of the media! I’m joking, of course. He said to just be yourself, that’s the most important thing.”

There is no doubt that Paunovic is exactly that. Reading look to have landed themselves a gem.